A brewing threat facing the presidency of Donald Trump may be one that stirs hardly any notice in the roiling waters of Washington: a quietly developing federal court battle that will shed light on whether Mr. Trump unconstitutionally benefited from foreign and domestic interests through his Washington hotel.

Today, the term emoluments − until recently seldom uttered outside constitutional-law classes, even more rarely understood − increasingly is what American frontier pioneers used to call a ‘’fighting word.’’ Indeed, a big, bitter and consequential fight is emerging over the word, its meaning in Article 1, Section 9 of the U.S. Constitution and its applicability to a President with worldwide hotel properties. One of these properties is located at 1100 Pennsylvania Avenue, N.W., a mere five blocks from the White House and accounting for more than $40-million in revenue last year. Foreign dignitaries have made that address their residence of choice or rented event space.

At the moment, the President faces a litany of crises: investigations into collusion and obstruction of justice; alleged hush payments that broke election-finance rules; and allies aghast at the dismantling of decades of U.S. foreign policy.

But that 16-minute walk from the Trump International Hotel to the place where Mr. Trump dwells has the potential of becoming the most important gap in American politics since the 18-minute gap in Richard Nixon’s White House tapes. In that gap are substantial questions whose ultimate answers, in the judicial branch of the American government that is deliberately separate and equal from the executive branch Mr. Trump controls, could alter history.

Why did the 18th-century drafters of the Constitution − gentlemen farmers marinated in Enlightenment values, plutocrats skeptical of the power of wealth in politics, idealistic North Americans horrified by the practices of European royal courts − find the need to include in a document establishing a new government the following prohibition? “No Person holding any Office of Profit or Trust under them [the United States], shall, without the Consent of the Congress, accept of any present, Emolument, Office, or Title, of any kind whatever, from any King, Prince, or foreign State.’’

The key issue will be whether Mr. Trump, or his trust, or his relatives, profited from the practice of foreign diplomats staying at the Trump International – and whether those gains meet the definition of an “emolument,” a clause added to the Constitution by Charles Pinckney, one of the members of the 1787 Constitutional Convention.

Early American political leaders with only a few exceptions − Benjamin Franklin prized the diamond-encrusted snuff box presented to him by Louis XVI −abhorred the practice of proffering valuable gifts as part of diplomacy. Taking inspiration from Dutch law, they banned the practice even in the often-forgotten Articles of Confederation, the document that preceded the Constitution and provided the structure that governed the young United States form 1781 to 1789.

One of the few postconvention references to the issue came at the ratifying convention in Virginia in 1788, when governor Edmund Randolph explained, ‘’This restriction was provided to prevent corruption.’’

American legal courts rarely have ruled on the ‘’emolument clause,’’ as it is known in law-school seminar rooms. But lawyers representing the governments of the District of Columbia and the State of Maryland are arguing that the President cannot, in the words of District of Columbia Attorney-General Karl Racine, ‘’accept profits from private transactions, including those involving services given at fair market value, like those we allege are occurring at the Trump International Hotel here in the District."

This threat was anticipated by the Trump team, and one of the president-elect’s lawyers, Sheri Dillon, argued that the clause didn’t apply to emoluments ‘’that have nothing to do’’ with the President’s performance in office. Later, Trump lawyers argued the clause applied only to payments made in connection with an official’s decisions, not his businesses.

In a 52-page opinion, however, U.S. District Judge Peter Messitte ruled that the suit, filed in Maryland, can proceed. Separate legal action, filed in the District of Columbia, by some 200 Democrats in the House of Representatives makes much the same point.

‘’We sued because this corruption is taking place in our backyard, and because 325 million Americans shouldn’t have to wonder if the President is putting his personal financial interests ahead of the national interest,’’ Mr, Racine said. ‘’Our team is working hard to stop President Trump from unlawfully profiting from the presidency.’’

Even if these twin legal actions prevail − and the President’s team is mobilizing to fight them − the penalties for Mr. Trump likely will be searing but ultimately far less expansive than the Democrats hope. If the Democrats sweep into both chambers on Capitol Hill after the midterm elections in November − unlikely but possible − the prospects of 67 votes in the Senate to remove the President are dim.

Mr. Trump, to be sure, may be forced to release his tax returns, an action he has steadfastly opposed since the beginning of his presidential campaign. Or, he might be forced to relinquish control of the sparkling hotel on Pennsylvania Avenue. That would change life as he (and many others) know it, but it would not substantially alter American politics, or even his real estate portfolio. 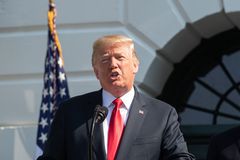 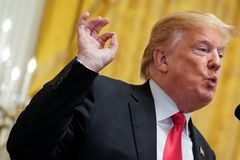 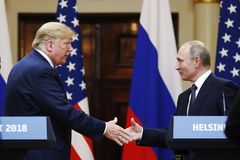