Wendi Winters was a dedicated journalist, passionate about the life of her Annapolis community.

As a general assignment reporter at the Capital Gazette, the 65-year-old wrote Teen of the Week and Home of the Week, two popular human-interest features. As a girl scout troop leader and youth adviser at her church, she organized and cooked for numerous conventions. In her down time, she frequented the theatre.

And she was at the Capital Gazette working on a profile of a local teen when a gunman shot out the glass door of the office and unleashed a volley of shotgun blasts on the staff within.

“She was doing her job, she was doing what she loved to do,” Winters Geimer, the eldest of Ms. Winters’s four adult children, said outside a vigil at Annapolis’s Unitarian Universalist Church Friday afternoon. “I want people to keep telling the stories she cared about telling, community stories, that aren’t all crime and doom and gloom.”

On one of the deadliest days in history for American journalists, Maryland’s grieving state capital took stock of the wave of mass shootings that has inundated the country and so suddenly washed up in their quiet city.

The shooting comes at a time when some U.S. reporters feel increasing hostility, facing daily online threats and harassment, turned into punching bags for populist politicians and regularly booed at political rallies.

Colleagues of the Capital Gazette victims, for their part, were determined not to let the shooter stop their journalism. Working from laptops in a mall parking lot across the street from the newspaper office Thursday, reporters Chase Cook and Pat Furgurson, and photographer Joshua McKerrow – none of whom had been in the newsroom when the shooting happened – cranked out the Friday edition of the paper reporting on its own tragedy.

Mr. Furgurson, who had been tied up for the morning with medical appointments, was getting lunch at the mall food court before heading into work when an editor at the Capital Gazette’s sister paper in Baltimore called to tell him about the shooting. Mr. Furgurson said it took him “about 30 seconds” to decide the paper had to come out regardless.

He turned the back of his pickup truck into a makeshift newsroom and he, Mr. Cook and Mr. McKerrow fed material back to editors in Baltimore who laid out the paper’s pages. “I was just going through the motions,” Mr. Furgurson recalled in an interview the next day. He said he had just one message in the wake of the killings: “Buy a local newspaper.”

The suspect in the killings, Jarrod Warren Ramos, by the police’s account, was that rare person with a long-standing dispute with the paper who decided to act on his threats. After the Capital Gazette wrote a story about harassment involving Mr. Ramos and a woman on Facebook in 2011, he unsuccessfully sued the paper and mused on Twitter about killing the columnist who wrote about him.

Prosecutor Wes Adams told Mr. Ramos’s bail hearing Friday that the suspect barricaded the back exit to the Capital Gazette newsroom first before charging in through the front. At least one staffer tried in vain to escape out the back before being gunned down, Mr. Adams said. When police arrived, they found Mr. Ramos hiding under a desk.

“He executed a plan,” Mr. Adams said in court. “He barricaded the door before systematically hunting and killing these five innocent people.”

Mr. Ramos appeared via videolink, clad in a navy-blue prison jumpsuit, with eyes rolled up and to the side, and did not once speak or acknowledge the proceedings.

At the Gazette, Mr. Hiaasen, as with Ms. Winters, was a veteran journalist. Before joining the paper in 2010, he wrote features for the Baltimore Sun and a column for the Miami Herald. A married father of three, Mr. Hiaasen served as assignment editor and wrote a weekly column. He spent five months earlier this year teaching a news reporting class at the University of Maryland.

“He told us that our classroom was supposed to be like our newsroom, and it really wasn’t like he was our teacher – he was speaking to us kind of as equals, people who were also going to be journalists,” said Hannah Himes, one of his students. “He was … somebody that encouraged you to go out and get the story.”

Another victim of the shooting, Ms. Smith had recently started at the Capital Gazette and was engaged to be married. She was in charge of co-ordinating advertising and planning events for the publication. Her cousin and best friend, Chrissy Tegtmeyer, said Ms. Smith attended a doctor’s appointment the morning of the shooting before coming to work.

“Becca had finally found her home away from home at the Gazette,” Ms. Tegtmeyer said in a message to The Globe. “Becca strived for perfection when getting her events together.”

The editorial page editor, Mr. Fischman, had been the paper’s voice since 1992 as the author of its unsigned editorials. His friends remembered him as a soft-spoken man fond of cardigan sweaters.

David Williams, who tied memorial balloons to the sign outside the building that housed the Capital Gazette Friday afternoon, said he used to run into Mr. Fischman dining alone at a now-closed Old Country Buffet location – and was overjoyed a couple of years back when Mr. Fischman married a Mongolian opera singer.

“He was always decent, a real gentleman,” Mr. Williams said.

Mr. McNamara, the sports reporter killed Thursday, had been at the paper for more than two decades. In addition to his passion for covering athletics, he also edited two weekly papers published by the Capital Gazette and authored two books on sports.

Its status as a state capital aside – and close proximity to both Washington and Baltimore – Annapolis is a quiet place best known for its quaint and well-preserved 19th-century downtown. And nearly everyone seems to have a connection to the local paper, which focuses as much on local events, high-school sports and community news as on the statehouse.

Mary Kate Eckles, 24, described Annapolis as “a cartoon town,” so much does it cozy red brick centre resemble a scene from a Victorian watercolour. A subscriber to the paper when she lived in Annapolis for university, Ms. Eckles happened to be back in town for a wedding.

“These shootings happen so often, eventually it’s going to happen somewhere you know,” she said after laying a bouquet of flowers near the newspaper’s offices.

Tunde Farrell, a middle-aged software executive whose children’s sports teams benefited from the newspaper’s coverage, wiped away tears as she visited an impromptu memorial near the paper.

“It’s frightening,” she said of the violence. “We have to make a change, so everyone doesn’t have guns.”

Despite a barrage of mass shootings that have left hundreds dead across the U.S. in recent years – and a youth-led movement for gun control in the wake of the Parkland, Fla., shooting earlier this year – the federal government remains far from enacting further gun-control measures.

President Donald Trump, who derides the media as “the enemy of the people” and encourages his supporters to heckle reporters at events, took on a more conventionally presidential tone Friday.

“Journalists, like all Americans, should be free from the fear of being violently attacked while doing their jobs,” he said at the White House. “The attack shocked the conscience of our nation.”

And even as they mourned five people who dedicated their lives to an institution of the local community, minister John Crestwell urged the congregation to see the deaths as part of a larger problem roiling America.

“We have a problem in this country that we have to name,” he said. “A problem of white male violence.”

Despite repeated attacks against the press, journalists continue to soldier on
July 3, 2018 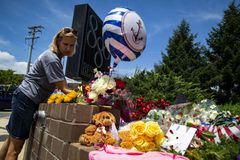 Opinion
The Capital Gazette shooting shows we need to rally around the press, not denounce them
June 29, 2018

The victims of the Capital Gazette newspaper shooting
June 29, 2018 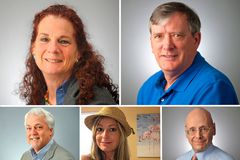 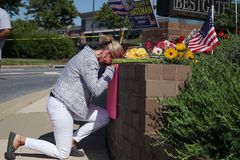 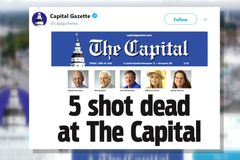