When I sent an e-mail to Chris Jahnke, a political communications expert based in Washington, D.C., asking her about the challenges facing the five remaining women Democrat U.S. presidential candidates and the advice she’d give them, she sent me three links. One was to the CNN town hall that Elizabeth Warren did last March, where she told the story of how she became a special-needs teacher after attending what she describes as a commuter college (the University of Houston) that at the time cost US$50 per semester.

The second link was an ad for Amy McGrath, who ran for Congress in Kentucky in 2018. Striding down a runway with jets in the background, she recounts the story of how, at 13, she wrote her Congressman, Senator and every member of the House Armed Services Committee, asking them to change the law that prevented women from flying in combat. The year she entered the U.S. Naval Academy, the law changed, and Ms. McGrath spent 20 years as a Marine, flying 89 combat missions. Her opponent for Congress, a Mitch McConnell protégé, has vowed to repeal the Affordable Care Act, taking away health care for people like Ms. McGrath’s mother, a polio survivor. Becoming a Congresswoman “is my new mission,” Ms. McGrath says. Ms. McGrath is currently running in the Democratic primary for 2020′s Kentucky Senate race. The winner of the primary will face off against Mr. McConnell himself.

The third was an ad for Sol Flores, who ran for Congress in Illinois in 2018. In voice-over and re-enactments, she tells a harrowing story: When she was 11, she built a chest, filled it with the heaviest things she could find, and pushed it against her bedroom door – so that when the man who was living with her family came into her bedroom at night to lift her nightgown, she would wake up and fight him off. “I’ll fight for you in Congress as hard as I did to protect myself,” she vows.

Sol Flores for Congress - "That Door"

WATCH: “I’ll fight as hard for you in Congress as I did to protect myself” I am a survivor and I stand with other women who have bravely come forward to tell their stories. I chose to tell my story because it has shaped who I am today. I’ve been fighting for young people and families for the last 15 years and will continue to do so in Washington. Join me so that more women can have a seat at the table. #metoo #timesup #standwithsol https://goo.gl/sKbP1F Go to standwithsol.org to see the full video.

Posted by Sol Flores for Congress on Monday, February 12, 2018

In a phone interview, Ms. Jahnke told me why those clips are important (even though neither Ms. McGrath nor Ms. Flores won her race). The Warren story – along with others she’s told, like the discrimination she faced while pregnant – demonstrate the power of a woman’s point of view. “Before now, that wasn’t valued,” Ms. Jahnke says, “because it was ‘female experience.’”

Ms. McGrath’s clip offers a new model of female leadership, and Ms. Flores’s proves that women candidates are willing to be more vulnerable than ever before. “When I saw that ad, it was a wakeup call,” Ms. Jahnke says. “I’d never seen anything like it before. It proves that women are taking control, they want to have power over how they tell their stories, and they’re willing to be vulnerable. That is a huge change.”

Image consulting is a thing of the past. Ms. Jahnke’s work is about message consulting. The company she runs, Positive Communications, has coached Michelle Obama, advised Hillary Clinton’s presidential campaigns, and prepped thousands of women candidates over the past 20 years. She’s not consulting for any of the current presidential candidates, but she is working with women running for U.S. Congress and for state offices. (While her company also works with men, there seems to be an emphasis on female candidates.)

She’s busier than ever. Her group candidate training sessions used to attract 80 to 100 women. But after the 2016 election brought Donald Trump to the White House, 400 have been showing up. “It’s standing room only,” she says.

Ms. Jahnke’s job is to help a candidate define what she values most, and then hone her message until she’s comfortable articulating it. “It’s about how personal stories are utilized,” she says. “Having a purpose for your story, and then relating it to the lives of voters. It’s a way for a candidate to say, ‘I understand your life.’ Warren does that best right now.”

Let’s not get carried away, though. According to the Barbara Lee Family Foundation in Cambridge, Mass., which has studied every woman’s U.S. gubernatorial race since 1998, 90 per cent of voters still need a woman candidate to be “likeable.” And a superficial double-standard still determines what that is. The foundation’s online pamphlet, Keys to Likeability and Electability for Women 2019, offers instruction in walking some insanely fine lines:

While “personal narratives that highlight resilience and overcoming tough odds resonate with voters and reinforce likeability,” they’re “not as effective when it comes to establishing qualifications.” A woman candidate “should take solo credit for her accomplishments, to establish her qualifications.” But she also needs to “acknowledge her team’s contributions.” “Underscoring underdog status” works. So do “informal photos of women candidates engaging with children and in their communities,” “smiling and relating to people,” and “using humor to present herself in a way that doesn’t come across as taking herself too seriously.” Going negative doesn’t work for women; if a candidate wants to diss a rival, better to get someone else in her ad to do it.

And of course, “women’s style and appearance are highly scrutinized,” much, much more than men’s. Voters don’t like women who sound “shrill,” “loud,” and “boring.” They want female candidates’ wardrobe, makeup, and appearance to be “impeccable.” They rate images of more attractive office-holders as more likeable, and found younger officeholders more attractive.

Ms. Jahnke uses that information; she’s not above advising her clients that blues and purples are the best colours for television. But she keeps her eyes on the prize. “At the last U.S. Democratic debate, we witnessed something we’ve never been able to see before: multiple women presidential candidates, challenging each other on policy,” she says. “Each offers her own model of leadership – they’re projecting a variety of role models, which is important. And more women reporters are covering campaigns, so the discourse is changing.”

Yes, a woman on camera should hold her hands more in the centre of her chest. “But people are no longer talking about Warren waving her arms around,” Ms. Jahnke says. “They’re listening to her message, and challenging her policies. Which is what we want the conversation to be about.” 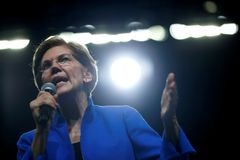 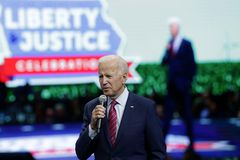 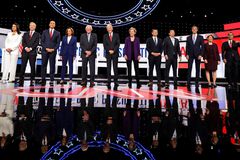