Billionaire media mogul Michael Bloomberg, the former mayor of America’s largest city, jumped into the race for the Democratic U.S. presidential nomination on Sunday as a moderate with deep pockets unabashedly aiming to beat fellow New Yorker Donald Trump in the November 2020 election.

Mr. Bloomberg’s belated entry into the race - just three months before the first of the state-by-state party nominating contests - reflects his skepticism that any of the other 17 Democratic candidates can unseat the Republican president.

The move represents an about-face for Mr. Bloomberg, who had said in March he would not run for president. He will compete with former Vice President Joe Biden and Mayor Pete Buttigieg of South Bend, Indiana, to become the moderate alternative to liberal U.S. Senators Elizabeth Warren and Bernie Sanders.

Mr. Bloomberg, founder and CEO of prominent media company Bloomberg LP and a leading philanthropist, has a financial advantage over his Democratic rivals. It already is on display as he has spent at least US$31 million in television ads that will run in states across the country over the next two weeks, a campaign spokesman said.

He has won allies in the party with his advocacy and philanthropy on climate change and in fighting gun violence, pouring millions of dollars into groups pushing for more restrictive gun laws.

Mr. Bloomberg will face significant disadvantages because of his late start, which means he will be playing catch-up with rivals who have been putting together campaign staffs for months.

Ranked by Forbes as the eighth-richest American with an estimated worth of US$53.4 billion, Mr. Bloomberg joins activist and former hedge fund investor Tom Steyer as the second billionaire to enter the Democratic race and will have the advantage of being able to self-finance his campaign and pour millions of dollars into advertising and hiring staff.

“We do not believe that billionaires have the right to buy elections,” Mr. Sanders said in a Twitter post on Sunday. “That is why multi-billionaires like Michael Bloomberg are not going to get very far in this election.”

’I KNOW WHAT IT TAKES’

While some Democratic candidates had warned against making the election all about Mr. Trump, Mr. Bloomberg kept the focus squarely on the president, with whom he has been well acquainted for decades. Mr. Trump was a notable New York real estate developer during Mr. Bloomberg’s three terms as mayor from 2002 to 2013.

“I know what it takes to beat Trump, because I already have. And I will do it again,” Mr. Bloomberg said, stressing his success as a self-made businessman who came from humble roots.

Mr. Bloomberg called himself a “doer and a problem solver - not a talker.”

Mr. Bloomberg, who filed paperwork on Thursday with the U.S. Federal Election Commission to run for president, previously had filed paperwork to be eligible for the Democratic primaries in Alabama and four other states with early deadlines for ballot qualification.

To counter his late campaign start, he plans to pursue the unorthodox strategy of skipping the four states with early nominating contests in February, beginning on Feb. 3 in Iowa, and focus primarily on states that hold primaries and caucuses starting on so-called Super Tuesday on March 3.

Mr. Bloomberg already has come under fire from liberal critics who say he would be the wrong choice for a Democratic Party turning against corporate money in politics and dedicated to ending income inequality in America.

He apologized this month for New York’s “stop and frisk” policy that allowed police to stop and search people on the street, which was decried by critics as racist for overwhelmingly targeting black men. Black voters are a critical Democratic voting bloc.

Mr. Bloomberg also has been mocked by some critics for attempting to ban sodas sold in cups larger than 16 ounces (473 milliliters) in an effort to reduce sugar consumption at a time of high rates of obesity in the United States. The proposal was struck down by New York courts.

Mr. Bloomberg will face questions about his decision to run for New York mayor in 2001 as a Republican. He switched to independent before a run for a third term in 2009. In 2018, while weighing whether to run for president, he switched his party registration again and became a Democrat.

He will be the second-oldest candidate among the Democrats in the race, as the party debates whether it is time for a new generation of leadership. Mr. Sanders, who took time off from the campaign trail after a heart attack in October, is the oldest at 78, followed by Mr. Biden (76) and Ms. Warren (70). Trump is 73.

Bloomberg News said on Sunday it will not investigate its founder, continuing a policy of limiting coverage of him.

Michael Bloomberg files paperwork to run for U.S. president, but has yet to make final decision
Subscriber content
November 21, 2019 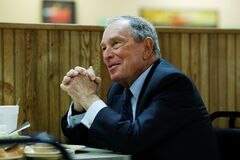 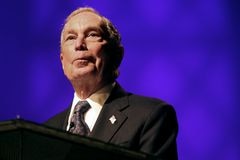 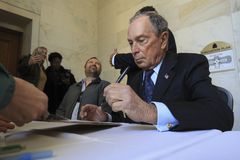