U.S. President Donald Trump came under attack from both sides of the American political spectrum on Thursday as liberal Democratic leader Nancy Pelosi and former White House aide and conservative hawk John Bolton both declared him unfit to lead the country.

“President Trump is clearly ethically unfit and intellectually unprepared to be the President of the United States,” Ms. Pelosi, the Speaker of the U.S. House of Representatives, told a news briefing.

“I don’t think he’s fit for office,” Mr. Bolton told ABC News in part of an interview aired on Thursday.

“There really isn’t any guiding principle that I was able to discern other than what’s good for Donald Trump’s re-election.”

Ms. Pelosi told a weekly news conference she is consulting with her fellow Democrats on whether to subpoena Mr. Bolton about the allegations in the book, which has not yet been distributed.

If Mr. Bolton testifies before Congress, it could revive the issue of Mr. Trump’s competence at a time when he faces a stiff challenge on Nov. 3 from Joe Biden, the Democrats’ presumptive presidential nominee, and as he fends off criticism over his handling of the coronavirus pandemic and protests over racial injustice and police brutality.

Republican senators on Thursday rejected criticism that they should have called Mr. Bolton to testify, and declined to talk about Mr. Bolton’s allegations.

“Money drives a lot of people to say a lot of things,” he said.

Mr. Trump himself has rejected the memoirs as a “compilation of lies” and called Mr. Bolton, who left the White House in September, a “sick puppy” who was trying to avenge his firing.

The U.S. Justice Department on Tuesday sued to block Mr. Bolton from releasing the book on the grounds that the latest draft still contained classified information.

The department’s submissions include an affidavit from General Paul Nakasone, director of the National Security Agency, which conducts electronic eavesdropping, that it contained secrets that could compromise a valuable NSA eavesdropping source.

The new allegations are “further proof” that Mr Trump’s actions in Ukraine are part of a pattern of abusing his power and the U.S. government for personal political gain, Mr. Schiff said in a statement.

The allegations include far more extensive accusations of impropriety than those that drove Mr. Trump’s impeachment, however.

In his book, The Room Where It Happened, Mr. Bolton said Mr. Trump expressed a willingness to halt criminal investigations to favour dictators he liked.

He also wrote that Mr. Trump said invading Venezuela would be “cool” even as the U.S. government has said it does not favour using force to topple socialist President Nicolas Maduro.

Senate Democratic leader Chuck Schumer said the revelations explain the President’s position on China, including his initial praise for Beijing’s response to the coronavirus outbreak and silence on alleged human rights abuses.

“President Trump cannot be trusted to deal with China policy any longer,” Mr. Schumer said on the Senate floor.

According to Mr. Bolton, Mr. Trump told China’s Mr. Xi in June, 2019, to go ahead and build camps for its mostly Muslim Uyghur minority and other Muslim groups despite his administration’s criticism of China’s mass detention.

“I didn’t hear that at all,” Mr. Navarro told reporters at the White House on Thursday. “Bolton’s depiction of that event is not how I would describe it. That’s an alternate universe.” 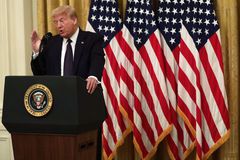 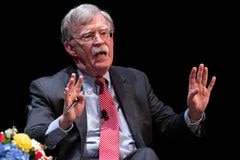 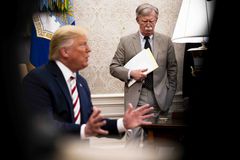