The funeral of George H.W. Bush Wednesday was the last breath of a long-ago time even as it was a signature American moment.

The old Washington establishment sat uneasily with the new Washington power brokers, the conservative mingled warily with the liberal, the nostrums of the populist and the patrician abandoning their collision for a brief moment, the struggles of the age muted for an instant.

And as the newly empowered and the once powerful found their seats amid the 215 stained glass windows of the capital’s most sacred gathering place to mark the life of an establishment president who represented the last ties to the Second World War and to a faded brand of conservatism, former U.S. secretary of state Condoleezza Rice and former Canadian prime minister Brian Mulroney greeted each other in an aisle with a robust hug. “He’s brought this country together again,” Ms. Rice said of Mr. Bush. “Yes, he did,” Mr. Mulroney replied.

Indeed, while the September funeral of GOP Senator John McCain of Arizona was a scratch to the American conscience, the funeral of Mr. Bush was a moment of American unity – short-lived and selective, perhaps, but profound nonetheless.

At the front of Washington’s National Cathedral were five presidents, with Donald Trump only two seats from Barack Obama, whom he has continually ridiculed, and five from Hillary Rodham Clinton, his 2016 campaign rival. (Mr. Trump shook hands with the Obamas, but not the Clintons.)

One of the four eulogists was Mr. Mulroney, who saluted his onetime fishing companion as “a true gentlemen, a genuine leader – one who was distinguished, resolute and brave.”

Former president George W. Bush spoke of his father’s dedication to service. “He recognized serving others enriched the giver’s soul,” he said, adding in an allusion to Mr. Bush’s Thousand Points of Light volunteerism foundation, “To us he was the brightest of the thousand points of light.” In the dark of early-morning Wednesday, a thousand points of light aboard the aircraft carrier USS George H.W. Bush spelled out “GHWB41.”

The 43rd president described the 41st as “a great president of the United States, a diplomat of unmatched skill, a commander in chief of formidable accomplishment and a gentleman who executed the duties of his office with dignity and honour.”

But the most poignant moment of the proceedings came when the son spoke of his White House predecessor as “the best father a son or daughter can have.” The remarks reduced the younger Mr. Bush to tears, and as he departed the pulpit he patted, ever so gently, the flag atop his father’s coffin.

Through it all was the sense that Mr. Bush had occupied a time far different from the present, a political culture and diplomatic world of well-known conventions and traditions, established political folkways, genteel traditions. Indeed, the president’s funeral came only a day after the current Secretary of State, Mike Pompeo, questioned the value of the United Nations and the Organization of American States, institutions that Mr. Bush respected and with whom he worked.

Despite the yawning distance between the Bush and Trump years – and the dramatic changes in American conservatism, which once abhorred budget deficits and embraced free trade – the rites reflected the growing consensus that Mr. Bush was perhaps the most consequential American one-term president since James K. Polk, who in his single term from 1845 to 1849 achieved his avowed presidential goals of cutting tariffs, acquiring New Mexico and California from Mexico and settling a longstanding dispute with the British over the Oregon Territory that, until 1846, included what is now British Columbia.

As a result, the denizens of official Washington – indeed officials from around the globe – were well represented. In one row of pews, for example, were five vice-presidents. Across the aisle were King Abdullah II of Jordan, Polish Solidarity leader Lech Walesa, former president Carlos Salinas of Mexico, and President Hashim Thaci of Kosovo. And, along with lawmakers and Supreme Court jurists, there was Charles, Prince of Wales.

The Bush funeral was the first time that a sitting president didn’t eulogize one of his predecessors since Richard Nixon didn’t speak at the funeral of Lyndon Johnson. Indeed, the Bush team sought to minimize Mr. Trump’s role at the rites but acceded to his attendance because the rites were controlled not by the Bushes but by the Defence Department, which has responsibility for funerals for presidents and for their spouses and which conducts these proceedings with military precision – and with disciplined adherence to custom and precedent.

But there was no hesitation in inviting Mr. Mulroney to play a visible role, as he had performed for Ronald Reagan and then for his widow, Nancy Reagan. “My dad and Mulroney,” former Florida governor Jeb Bush said, “were the closest friends of all the world leaders.”

In his remarks, Mr. Mulroney compared the summer of his 21st year – working as a labourer to earn school fees and being sustained by the home cooking of his mother, “safe and secure,” as he put it, in their Northern Quebec home – with the summer of Mr. Bush’s 21st year, when the future president was “preparing to attack Japanese war installations in the Pacific.”

Mr. Mulroney saluted his friend as “a highly accomplished man who also had a delightful sense of humour and was a lot of fun,” but he also sought to put the 41st president – whose White House years were freighted with the drama of the end of the Cold War and the forming of the 29-nation coalition to repel Iraq from Kuwait – in historical context:

“Fifty or a hundred years from now, as historians review the accomplishments and context of all who have served as president, I believe it will be said that, in the life of this country – which is in my judgment, the greatest democratic republic that God has ever placed on the face of this earth – no occupant of the Oval Office was more courageous, more principled and more honourable than George Herbert Walker Bush.”

The former prime minister won laughs when he allowed as to how he was buoyed by the very fact that Mr. Bush took notes as he spoke at a NATO summit in 1989. And no one, in the cathedral or beyond, missed Mr. Mulroney’s praise of NAFTA (it “created the largest and richest free-trade area in the history of the world”), a jarring contrast with Mr. Trump’s verdict that the pact, now likely superseded with a new agreement, was “a disaster.”

As long as three years ago, Mr. Bush began to think about his funeral and at that time he asked Mr. Mulroney to be a eulogist. “I didn’t want to talk about it with him,” Mr. Mulroney recalled in an interview four days before the funeral, “but the president said I had to get this done.”

Nine days before the terrorist attacks of Sept. 11, 2001, Mr. Mulroney visited with the Bushes, and the former prime minister told his friend that after a lifetime of challenge and tumult he seemed serene and content. Mr. Bush walked Mr. Mulroney to the side of the house and showed him a small engraved plaque that had been unobtrusively installed some days earlier. It read: “CAVU.” The letters stood for “ceiling and visibility unlimited,” the words young Navy pilots such as Mr. Bush yearned to hear beginning their missions.

“It meant perfect flying,” Mr. Mulroney quoted Mr. Bush in his eulogy. “That’s the way I feel about our life today – CAVU – everything is perfect. Bar and I could not have asked for better lives. We are truly happy and truly at peace.” And now, with both Mr. Bush and his wife, whom he always called “Bar,” dying nearly eight months apart, they have the world’s hope that they are resting in peace.

Opinion
Mulroney, Bush and the last lyrical act of a unique friendship
December 5, 2018 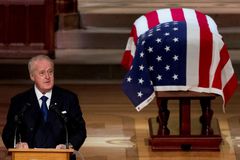 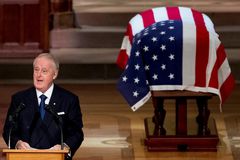