Adrian MorrowU.S. Correspondent
Washington
Published May 27, 2020 Updated May 28, 2020
Comments
Please log in to listen to this story. Also available in French and Mandarin. Log In Create Free Account

The Trump administration has declared that Hong Kong is no longer significantly independent of Beijing’s control, threatening to revoke the territory’s special trade and diplomatic status.

The move further ramps up tension between the two countries amid President Donald Trump’s long-running trade war and increasingly pointed criticism of China’s handling of the coronavirus epidemic.

Secretary of State Mike Pompeo on Wednesday took aim at Beijing’s plan to impose a new security law on Hong Kong that could be used to crush pro-democracy protests. As a result of the law, he said, he would inform Congress that China had broken its promise to allow Hong Kong’s citizens to continue exercising democratic rights when Britain handed the former colony over to China in 1997.

“Beijing’s disastrous decision is only the latest in a series of actions that fundamentally undermine Hong Kong’s autonomy and freedoms,” he said in a statement. “While the United States once hoped that free and prosperous Hong Kong would provide a model for authoritarian China, it is now clear that China is modelling Hong Kong after itself.”

China is moving to impose a law on Hong Kong that would make it illegal to undermine Beijing’s authority. The territory’s democracy movement fears the new rules would be used to crack down on protests and campaigning ahead of legislative council elections next month.

Under the “one country, two systems” approach Beijing agreed to as part of the British handover, Hong Kong has some civil rights, including freedom of speech and an elected council, that mainland China does not.

The U.S., for its part, has continued to give Hong Kong the favourable treatment it enjoyed as a colony of the United Kingdom. The territory is not subject to many tariffs, export controls and investment limits that apply to Beijing. It also has an extradition treaty with the U.S.

Mr. Pompeo’s report to Congress is the first step necessary in rolling back that special status and treating Hong Kong the same as mainland China.

Bonnie Glaser, an expert on Chinese foreign and security policy, said the Trump administration was firing a warning shot in an effort to make Beijing back down. Ending Hong Kong’s special status would take more action from the White House, and potentially Congress, to alter specific commercial and diplomatic arrangements.

If the U.S. followed through on the threat, and repealed every special consideration it gives Hong Kong, the result might be drastic.

“It would change Hong Kong as we know it today. We’d probably see capital flight and American citizens leaving. It could be the end of Hong Kong as a financial hub in the region and the world," said Ms. Glaser, of the Center for Strategic and International Studies, a think tank in Washington. “But there’s nothing inevitable about all of that. There are choices to be made here.”

In a statement, Foreign Affairs Minister François-Philippe Champagne said he was “deeply concerned” by China’s security law but he did not threaten any consequences for it. “Making such a law on Hong Kong without the direct participation of its people, legislature or judiciary would clearly undermine the ‘one country, two systems’ framework,” he said in a statement.

The U.S. and China have been locked in a trade war since 2018, when Mr. Trump imposed punitive tariffs on most Chinese exports. In recent weeks, the President had repeatedly excoriated Chinese officials for trying to cover up COVID-19 when it first emerged late last year.

Mr. Pompeo has defied China by cultivating closer ties with Taiwan, which Beijing views as a renegade province. Earlier this month, he castigated the World Health Organization for not inviting Taiwan to the World Health Assembly.

Derek Scissors, who studies China for the American Enterprise Institute think tank, said Beijing has looked increasingly emboldened in recent months and may be ready to accept U.S. punishment as the price of enforcing its control over Hong Kong. If Mr. Pompeo follows through on his threat, it could even provoke further retaliation from Beijing, he said.

Mr. Scissors pointed, for instance, to China’s increasingly strong language on Taiwan. In a speech Friday, Prime Minister Li Keqiang omitted the usual qualifier “peaceful” when describing his government’s desire to take control of the island.

“The fact that they’ve gone out of their way to show Taiwan that this is partly aimed at them tells me that this is at a level of seriousness that’s going to provoke the U.S.,” Mr. Scissors said. “Things can definitely get worse from here. This opens the door to a serious escalation.” 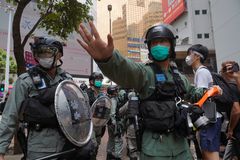 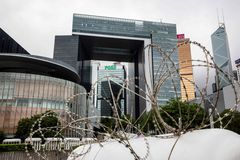 Conservatives call on Canada to organize international coalition to protect Hong Kong
May 26, 2020 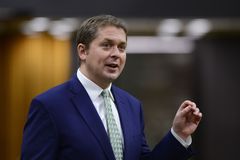