Stumping at a suburban Charleston church three days before the South Carolina primary, Joe Biden was subdued and meandering.

He mused about his belief in God (“I don’t know how people make it without faith”), reminisced about Barack Obama (“he’s my friend”), and even anticipated the failure of his own presidential campaign (“whether I’m around or not,” he told a member of Congress in the audience, “you have a lot of work to do”).

Later that day at a local arena, an energized Bernie Sanders looked past the primaries to train his fire on U.S. President Donald Trump.

“We cannot continue having a president who is a racist and a sexist and a homophobe and a xenophobe and a religious bigot,” the Vermont Senator declared, as the crowd interrupted him with thunderous applause and cries of, “We love you, Bernie.”

This contrast – between a rambling Mr. Biden and a fired-up Mr. Sanders – had been a hallmark of the campaign to choose the Democratic nominee for president. In Iowa, New Hampshire and Nevada, it presaged dismal finishes for the moderate Mr. Biden. The leftist Mr. Sanders surged into first place with ambitious promises of single-payer health care, free university tuition and universal child care.

But when the votes were counted last Saturday, Mr. Biden won South Carolina by a landslide. Then, on Super Tuesday, the former vice-president finished first in 10 out of the 14 states voting, overtook Mr. Sanders in the delegate count, and forced every other serious contender out of the race. In scarcely four days, Mr. Biden went from listless campaigner to undisputed front-runner.

In the end, a quiet majority had come through for him.

Ravi Perry, chair of the political science department at Howard University in Washington, contended Mr. Biden’s support was always there. It just wasn’t apparent in small, overwhelmingly white states such as Iowa and New Hampshire.

And, he pointed out, Mr. Biden’s voting coalition gives him a natural edge. His time as Mr. Obama’s vice-president appeals to African-Americans, the most reliably Democratic demographic. He also does well with older voters, who are far more likely to turn out to the polls. And his moderation can win over independents and soft conservatives fed up with Mr. Trump.

“People are more interested in going back to normalcy than they are in taking a gamble on complete change. At least with Biden, they know what they’re going to get,” Prof. Perry said. “Most peoples’ primary concern is defeating Donald Trump, not ideological congruence with the candidate.”

In retrospect, there was evidence of this strength even when Mr. Biden stumbled.

Patrick Burke, who came out to see Mr. Biden at an Iowa dive bar shortly before the February caucuses, said he had supported Mr. Sanders in 2016 because he thought Hillary Clinton had too much political baggage. But this time around, he was with Mr. Biden because he preferred the former vice-president’s proposal to create a voluntary government health insurance plan over Mr. Sanders’s promise of a mandatory one.

Adam Kaul, for his part, largely agreed with Mr. Sanders on policy. But he was considering Mr. Biden because he felt he might have a better chance in the general election.

“I’m thinking of myself as a single-issue voter, which is: someone who can win,” said Mr. Kaul, 47, a university professor who drove in from nearby Illinois.

Mr. Sanders’s popular vote victory in Iowa also masked a troubling sign for the Senator: He finished 24 points down from his 2016 total. It was a similar story in New Hampshire, where Mr. Sanders attracted 76,000 fewer votes than he had four years earlier.

Meanwhile, Mr. Biden’s argument that he could expand the Democratic voter pool appeared to have traction.

“We know we have to bring Republicans into the fold if we’re going to win. My Republican friends would take Biden over Trump, but not any other Democrat,” said Jeanine Connor, 60, after a speech by Mr. Biden at a theatre in Manchester, N.H.

Ms. Connor, who travelled from California with her children for a chance to see the presidential candidates up close, was part of that demographic. She had voted for candidates of both parties, and supported Republican John Kasich in the 2016 primaries.

Mr. Biden’s Super Tuesday results suggest she wasn’t an outlier. Voter turnout was up across the board, and it generally favoured Mr. Biden. In Virginia, for instance, nearly twice as many people went to the polls as in 2016 and Mr. Biden took the state with 53 per cent of the vote.

To some of these supporters, Mr. Biden’s blandness compared to Mr. Sanders was a feature rather than a bug.

“Biden didn’t promise things he can’t deliver on,” said Annette Epinger, a 60-year-old postal worker, outside a candidates’ debate in Charleston. “Bernie is promising a lot of things, but he doesn’t know how they’re going to happen.” 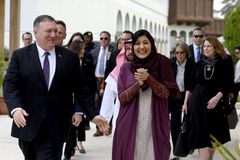 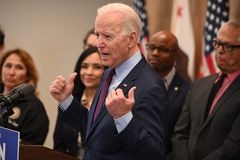 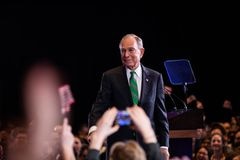