They disagreed, as they have for months. They criticized each other, sometimes harshly. They pushed each other, mostly but not always, gently. But in Sunday night’s Democratic debate, former vice-president Joe Biden and Sen. Bernie Sanders, the two major surviving candidates, differed primarily in degree.

They both proposed that all medical tests and treatments growing out of the coronavirus pandemic be covered. They both asserted that all Americans should be made whole for the economic dislocation created by the spread of the virus. But most of all they agreed that President Donald Trump and his administration were mishandling the crisis posed by this global threat.

Mr. Sanders said the first step to address the threat was, as he put it, to “shut this President up right now.” Mr. Biden said that the country has not moved fast or far enough to address the mounting health crisis. Together – as if there were a tacit pre-arranged understanding – they presented a united front in opposition to the President and a stark contrast to the administration’s approach to the threat.

The emergence of the virus presented the Democratic contenders with a new club to employ as a bludgeon against the President.

Mr. Biden said “the existential threat to the United States of America is Donald Trump.” Mr. Sanders said “this country cannot deal with a president who is a pathological liar” and a man who was “a racist, sexist and homophobe.” They both said they would campaign for whomever is the Democratic nominee. At one point, Mr. Sanders said of his rival, “I know your heart is in the right place.”

And the two made news: Mr. Biden, who has hinted he would select a woman as his vice-presidential running mate, used this national television audience to make a firm commitment to do so. Mr. Sanders would not go that far, but said that “in all likelihood” he would do the same.

There were, to be sure, disputes – the preservation of the Social Security retirement supplement, gun control and health care. Mr. Sanders argued that his “Medicare-for-All” plan would provide comprehensive medical coverage during the coronavirus crisis. Mr. Biden countered with his pledge that “nobody – nobody – will pay” during this national crisis. Their Republican counterparts have not made such sweeping proposals.

In style, content and tone, this debate was a throwback to the first American televised confrontations, the presidential debates between Vice-President Richard M. Nixon and Sen. John F. Kennedy conducted in a television studio rather than before a live audience.

Like Mr. Biden and Mr. Sanders, the two 1960 combatants were once-friendly rivals as lawmakers who served together; the earlier debaters both were elected to the House in 1946. Like Mr. Biden and Mr. Sanders, who were in their 11th debate, the earlier combatants were familiar with each other; they actually conducted a debate in 1947, on labour issues, in McKeesport, Pa.

This time, however, the two debaters did not shake hands at the conclusion of the proceedings. The reason was good medical practice, not the lack of good manners.

From the start, the goals of the two candidates were clear. Mr. Biden sought to consolidate his position as the Democratic front-runner. From the start, Mr. Sanders tried to nudge Mr. Biden to the left, on medical care and the environment. Mr. Biden spoke for a restoration – not only of Democratic possession of the White House but also of the policies of the Barack Obama years. Mr. Sanders spoke for more dramatic change – not, for example, to restore Obamacare but to create what he called “a simple system, which exists in Canada.”

It was clear that this was a debate, and now a one-on-one struggle for the Democratic presidential nomination, between a market capitalist and a democratic socialist.

In the conflict that such a confrontation entails – the first in the country’s history – Mr. Biden was the incrementalist while Mr. Sanders was the insurgent. The Vermonter said that in some elements – free college tuition at state universities, for example – “Joe since the campaign [began] has come around.”

The approach of Mr. Biden, who said “people are looking for results, not a revolution,’’ was to handle the coronavirus crisis first and “then move on,” presumably to more dramatic change. A half-hour later, in an exchange over global warning, Mr. Sanders said the Biden plan was “nowhere near enough.”

But the hopes of the Democratic establishment – that the two would exchange thrusts and parries and then agree that Mr. Biden should proceed without opposition through the remainder of the primary season – were not requited. The campaign goes on, with primaries in Arizona, Florida, Illinois and Ohio on Tuesday. The Democrats have targeted all four of them for November. They lost all but Illinois four years ago to Mr. Trump. 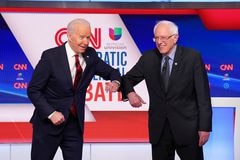 Bernie Sanders says he isn’t dropping out of the Democratic race. But where he’ll go from here is unclear
March 11, 2020 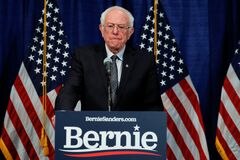 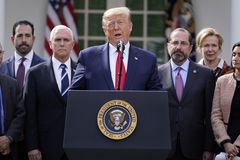