When he insulted a national military hero who had been in solitary confinement in a Hanoi prison. When he described white supremacists as “some very fine people.” When he urged American citizens who were members of Congress to “go home.” When he employed a vulgar term to denigrate third-world countries. When he cozied up to Vladimir Putin in Helsinki. When he separated children from their parents at the Mexican border.

Each of these, in its time, was regarded as a potential turning point in the presidency of Donald Trump.

So now, with the unfolding Washington imbroglio over Mr. Trump’s discussion about former vice-president Joe Biden with newly installed Ukrainian President Volodymyr Zelensky, has the United States reached another one of those “when” moments that might signal a crisis in the White House, or might be a fulcrum when the President’s fervent supporters break with him?

Opinion: The impeachment inquiry is on – but Trump can still cast Biden as ‘Crooked Joe’

On Tuesday, it became clear the House Democrats were done debating, and agreed the time has come to move against the President. That change in sentiment was most evident when House Speaker Nancy Pelosi called for impeachment proceedings.

Mr. Trump has recovered, and sometimes flourished, after each of those “when” moments, rendering him the human political equivalent of the tardigrade, or water bear – a tiny, round, eight-legged micro-animal that Harvard and Oxford scientists have designated the most resilient creature on earth.

And while scientists believe the water bears can survive killer asteroids, supernovae and gamma-ray bursts, Mr. Trump thus far has survived the political equivalent of that heavenly trifecta – even in defiance of his controversial personal comportment, his insults to foreign leaders and his alleged episodes of multiple sexual aggressions.

This latest episode – allegedly involving an implied threat by Mr. Trump in a phone call with his Ukrainian counterpart last summer to withhold US$391-million in congressional approved military funding if the foreign leader did not favour a corruption investigation into the work of Hunter Biden (Joe Biden’s son) for a Ukrainian gas company – is of a different magnitude altogether, though in truth that very “different magnitude” notion has been proffered in many of the previous incidents when they first surfaced.

The Ukraine intervention is a bridge too far for Democrats, and perhaps for a handful of Republicans as well. Ms. Pelosi, who until now has steadfastly opposed impeaching Mr. Trump, earlier this week said White House refusal to release a whistle-blower accusation against the President constituted a “grave new chapter of lawlessness, which will take us into a whole new stage of investigation.” On Tuesday, Mr. Trump said he authorized the release of “the complete, fully declassified and unredacted transcript of the call” by Wednesday.

Ms. Pelosi and some of the other House leaders had resisted impeachment, a vivid example of the distinction between the congressional Democratic party, which often urges caution, and the presidential Democratic party, which appeals in the primaries and caucuses to a mobilized liberal base that in this case is hungry to punish Mr. Trump in the harshest and most decisive ways. Ms. Pelosi held back because of fears the procedure would embolden the President and ignite his supporters, some of whom those very presidential Democrats may need if they are to deny Mr. Trump a second term in the 2020 election.

Only two U.S. presidents – Andrew Johnson in 1868 and Bill Clinton in 1998 – have been impeached, the political equivalent of being indicted. However, neither president was convicted in the Senate, where a two-thirds majority is required for removal from office. The only president to resign was Richard Nixon, who left the White House in August, 1974, when it was certain he would be impeached and it was likely he would be convicted.

For Mr. Nixon, the turning point was the so-called Saturday Night Massacre, when in October, 1973, he ordered attorney-general Elliot Richardson to fire special prosecutor Archibald Cox, an act two Justice Department officials refused to do.

“Before that, no Democratic leader – not one – advocated impeachment,” said Timothy Naftali, former director of the Richard Nixon Presidential Library and Museum. “What made it important was that it led to a bipartisan agreement that Nixon should be investigated for impeachment. There was pressure on the Republicans to stick with the President, but the Republicans didn’t stonewall and call the whole thing a ‘witch-hunt.’”

Opponents of the President say the Ukraine episode takes the Trump story to a new level – serious enough to be the trigger for impeachment.

The report of Robert Mueller, on Trump campaign and administration ties to Russia, demonstrated no provable underlying crime. At issue now is whether the use of the national-security powers of the presidency to pursue a personal cause against a political rival is in the spirit of the second article of impeachment against Mr. Nixon that charged him with abuse of power. That article passed the House judiciary committee by a 28-10 vote, with seven Republicans voting in favour.

Democrats are unlikely to find a middle ground with Mr. Trump. Some of them believe the question of impeaching the President is not one of “if” but now likely one of “when.” In the Trump era, the “whens” have accumulated with astonishing speed. 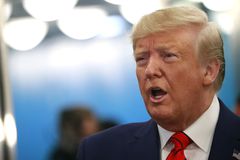 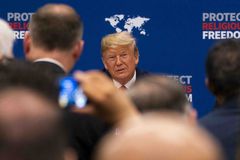 The story behind Biden’s son, Ukraine and Trump’s claims
September 22, 2019