In a time of plague and raw division, U.S. president-elect Joe Biden appealed for unity Wednesday in a Thanksgiving eve address to the country asking Americans to “steel our spines” for a fight against the coronavirus that he predicted would continue for months.

But even as he implored Americans to join in healing and common purpose, U.S. President Donald Trump asserted that the election should be overturned, a futile call but one that stokes the divisions Mr. Biden is trying to overcome.

“Each of us has a responsibility in our own lives to do what we can to slow the virus,” he said in remarks in Wilmington, Del.

Mr. Biden said until there’s a vaccine, wearing masks, physical distancing and limiting the size of gatherings “are our most effective tools to combat the virus.” But he pledged that from the start of his presidency, “we will take steps that will change the course of the disease,” including increasing testing, providing more protective gear and clearer guidance for businesses and schools to reopen.

And he said he himself was taking precautions around Thanksgiving and eschewing his traditional large family gathering, instead spending the holiday with just his wife, daughter and son-in-law.

“This is the moment when we need to steel our spines, redouble our efforts and recommit ourselves to this fight,” Mr. Biden said. “We’re all in this together.”

But Mr. Trump stoked the embers of his flailing effort to upend the election results as his lawyer, Rudy Giuliani, and other members of his legal team met Pennsylvania Republican state senators in Gettysburg. There, they again aired grievances about the election and repeated allegations of Democratic malfeasance that have already disintegrated under examination by courts.

Mr. Trump joined the meeting from the Oval Office, asserting: “This was an election that we won easily. We won it by a lot.” In fact, the election gave Mr. Biden a clear mandate and no systemic fraud has been uncovered.

In his remarks in Wilmington, Mr. Biden made passing reference to Mr. Trump’s refusal to concede, declaring “our democracy was tested this year,” but “the people of this nation are up to the task.”

“In America, we have full and fair and free elections, and then we honour the results,” he said. “The people of this nation and the laws of the land won’t stand for anything else.”

He also offered an optimistic vision, calling on Americans to “dream again” and predicting “the 21st century is going to be an American century.”

Mr. Biden’s remarks came as COVID-19 cases are surging nationwide. Hospitalizations, deaths and the testing positivity rate were also up sharply as the United States approached Thanksgiving, and public-health experts have warned the large family gatherings expected for the holiday are likely to extend and exacerbate the surge.

Mr. Biden has said turning the tide of the pandemic will be the top priority of his administration once he takes office in January, and he’s made multiple public remarks urging Americans to embrace mask-wearing and physical-distancing guidelines to combat the spread. The Democratic president-elect formed a coronavirus advisory board of scientists, doctors and public-health experts, and he plans to establish a COVID-19 co-ordinator in the White House to lead his administration’s response.

This week, however, Mr. Biden focused beyond the crisis stateside and unveiled his national security team on Tuesday, including his nominees for secretary of state, director of national intelligence and U.S. ambassador to the United Nations. Drawing implicit contrasts with Mr. Trump throughout the event, Mr. Biden said the team “reflects the fact that America is back, ready to lead the world, not retreat from it.” He’s also expected to name Janet Yellen as Treasury secretary in the coming weeks.

The president-elect’s team has also begun the next phase of its transition preparations after the Trump-appointed head of the General Services Administration declared Mr. Biden the “apparent winner” of the election, removing a major roadblock to co-operation between Mr. Biden’s staff and their counterparts in the Trump administration.

Mr. Trump has refused to concede the election, and his campaign continues to pursue legal challenges to the vote in some states. But the GSA’s ascertainment of Mr. Biden’s win means the transition can proceed regardless of the Republican President’s resistance.

For the next few days, Mr. Biden plans to spend some time focused on his family. He’s travelling with his wife, Jill, to Rehoboth Beach, the small Delaware beach town where the two have a vacation home. That’s where they’ll play host to their daughter and son-in-law for Thanksgiving dinner. Mr. Biden is expected to stay through the weekend in Rehoboth, before returning to Wilmington for further work on the transition. 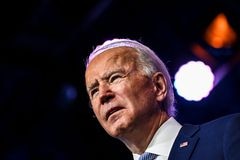 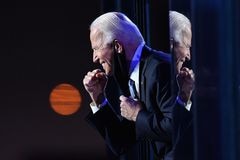 How Biden is aiming to turn his cabinet into a mirror of America
Subscriber content
December 10, 2020 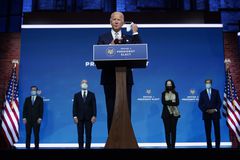