The bright rise and swift end – on Tuesday afternoon – of Kamala Harris’s campaign to become the Democratic candidate for U.S. president is bound to become a primer for women seeking high office. Was she done in by dated, sexist perceptions? Did she bring it on herself? The answer, of course, is both. (Full disclosure: I’m a U.S. citizen and I contributed to her campaign.)

From the beginning of Ms. Harris’s career in San Francisco, she was plagued by duelling narratives: The public was too hard on her/She was her own worst enemy. Was she ambitious – just days after Barack Obama’s election in 2008, she announced her candidacy for California attorney-general – or was she getting ahead of herself (the race was two years off)?

Was she admired – she frequently appeared in the society pages, and Oprah Winfrey put her on O magazine’s “Power List" – or was she an egomaniac? Haters sneered that she laughed too hard at her own jokes, and when she did something as simple as wave at a crowd, the clip became a meme for insincerity.

Because her supporters included police unions and the political and cultural elite, she was accused of being too much of an insider. Because she once dated Willie Brown, then the Speaker of the California State Assembly and a future mayor of San Francisco – well, you can imagine the kinds of accusations that inspired.

As California’s attorney-general, her law-and-order stand disappointed both those who thought she was too tough, especially on young black men, and those who thought she hadn’t done enough. When she unleashed the force of her logic and intellect – holding Jeff Sessions, William Barr and Brett Kavanaugh to account in televised Senate hearings – many cheered her on, yet many found her too hard, too scary. Polls even showed that people don’t like that she doesn’t have children.

In the July debate, when Representative Tulsi Gabbard of Hawaii attacked Ms. Harris’s prosecutorial record, donors accused her of not responding assertively enough. When she challenged Ms. Gabbard in the October debate, the Twitterverse found her “aggressive” and called the dialogue a “cat fight.”

Ms. Harris spoke passionately about race – in the first debate, she challenged Joe Biden for his stand on busing; in her last, she spoke for black female voters: “Don’t thank me for showing up – show up for me.” But black voters never warmed to her. She supported gender equality and women’s reproductive health, as well as education and paid family leave – all traditionally “women’s issues” – but female voters didn’t warm to her, either. In one final, absurd straw, Taylor Swift fans dissed her for holding a fundraiser at the home of Scooter Braun, one of Ms. Swift’s “enemies.”

All of that is disheartening, and some of it is infuriating. If we don’t allow a candidate to be flawed, to be nuanced, we’re going to end up with caricatures, not human beings. And it’s grim to note how quickly people began to laud Ms. Harris after she stopped vying for power.

But – and here’s the brought-it-on-herself part – candidates such as Amy Klobuchar, Elizabeth Warren and Pete Buttigieg, who could also be plagued by dated, negative perceptions, came up behind Ms. Harris and surpassed her. Why have they succeeded when she did not?

I suspect campaign strategists will point out that there’s a difference between being nuanced and being confusing. Future politicians would be wise to study how Ms. Klobuchar, Ms. Warren and Mr. Buttigieg have crafted clear, understandable personas and messages – which Ms. Harris never managed to do. She wanted to be both the little girl from the school bus fight and the tough cookie who could “prosecute Donald Trump” on the debate stage. She wanted to address voters’ “3 a.m. worries” but never articulated a clear vision for health care. She seemed more concerned with scoring T-shirt-ready catchphrases – “Little Dude,” “Trump Got Punked” – than making sure donors understood her policies.

As much as I will miss her in this fight, her departure may have a sliver of a silver lining. Because it may mean that voters are more discerning than they’re given credit for. If this election is showing us anything (so far), it’s that it’s a mistake for anyone – including a mixed-race female candidate – to assume she will automatically earn the black or female vote. There is no more automatic loyalty (if there ever was). Voters are justifiably skeptical. They want to be convinced.

Maybe the Democratic race will swing toward a centrist candidate who can entice Republican and independent voters disillusioned by Trumpism. Maybe liberals will finally feel emboldened enough to vote for a candidate who is unapologetically left-leaning. But as the race narrows, it’s becoming clearer: People want to know who they’re getting and what that person stands for. It’s our loss as well as hers that Ms. Harris wasn’t able to define and communicate that, but it’s a loss she can learn and come back from. The good news is that voters are paying attention. Maybe they won’t be fooled again. 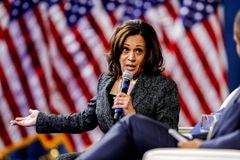 Opinion
Since when is being an intelligent woman a negative in the presidential nomination?
September 18, 2019 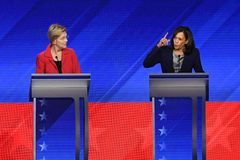 Opinion
Democrats could learn a lot from Kamala Harris. Will they listen?
Subscriber content
August 9, 2019 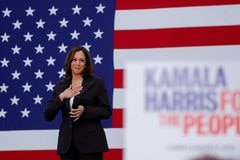