A judge on Friday sent long-time Republican political operator and businessman Paul Manafort to jail pending trial after a charge of witness tampering, the latest episode in a slow fall from grace of a man who was U.S. President Donald Trump’s campaign chairman in 2016.

Manafort, a target of Special Counsel Robert Mueller’s investigation into Russia’s role in the 2016 U.S. election, has been indicted in both Washington and Virginia on mostly financial-related charges, including conspiring to launder money and defraud the United States. He has pleaded not guilty.

Manafort had been on home confinement in Alexandria, Virginia, and required to wear an electronic monitoring device. Last week, Mueller charged him in a new indictment with witness tampering, which Manafort pleaded not guilty to on Friday.

But U.S. District Judge Amy Berman Jackson in Washington revoked his bail, sending him to jail.

“I have no appetite for this,” she said. “But in the end, I cannot turn a blind eye.”

“You’ve abused the trust placed in you,” she said.

Manafort turned around briefly to wave to his wife in the front row before heading out a door at the back of the crowded courtroom, court witnesses said.

Manafort’s spokesman did not respond for comment on the judge’s decision.

Manafort’s legal defense fund asked in a Twitter post, “Why is he the target of a partisan investigation?” echoing a theme of Trump and his supporters that the Mueller inquiry is a political witch hunt.

Trump said it was unfair to send Manafort to jail.

“Wow, what a tough sentence for Paul Manafort,” Trump wrote on Twitter even though Manafort has not been sentenced – he has not been convicted on any of the charges. “Didn’t know Manafort was the head of the Mob,” Trump wrote. “Very unfair!”

Mueller, whose investigation has overshadowed Trump’s 18-month-old presidency, is looking into whether any Trump campaign associates co-ordinated with Russia and whether Trump has unlawfully sought to obstruct the probe. Moscow denies U.S. intelligence agency allegations that it interfered in the election and Trump denies collusion.

Manafort’s trial in Washington is scheduled for September and the trial on the related charges in Virginia is set for July 25.

None of Manafort’s charges refer to the allegations of Russian meddling and largely pre-date the two months he worked as Trump campaign head.

Manafort has long-standing ties to a pro-Russian political party in Ukraine and a Russian oligarch close to the Kremlin. The charges against Manafort in Washington include failing to register as a foreign agent for the pro-Russia Ukrainian government under former President Viktor Yanukovych.

A June 8 indictment accused Manafort and Konstantin Kilimnik, a Manafort aide and political operative, of having ties to Russian intelligence, with tampering with witnesses about their past lobbying for Ukraine’s former pro-Russian government.

The indictment accused Manafort and Kilimnik of attempting to call, text and send encrypted messages starting in February to two people from a political discussion group – the so-called Hapsburg Group – that worked with Manafort to promote Ukraine’s interests in a bid to sway their testimony.

Manafort’s lawyers have argued that the evidence suggesting he tampered with witnesses is thin. One of the February 2018 conversations cited by prosecutors between Manafort and a person identified as “Person D1” lasted a minute and 24 seconds.

Greg Andres, one of the prosecutors, shed new light on the contents of that conversation in court on Friday. The witness, Andres said, was driving in a car in Italy on a rural road when his phone rang under an unidentified number.

Person D1, Andres said, quickly hung up the phone on Manafort while he was still talking and later contacted the Special Counsel’s office. 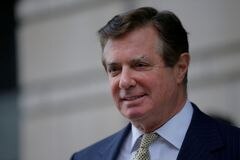 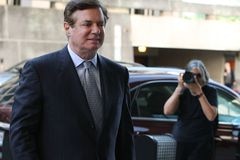 Judge declines to dismiss charges against Manafort related to false statements
May 25, 2018