In an era of contradictions, it was fitting that the last word in one of the signature antagonisms of the age came from a man whose voice had been stilled. In a time of cynicism it was refreshing that at least one moment was marked by expressions of idealism.

John Sidney McCain III – who fought in the Vietnam War, in the Senate and in the Republican culture war spawned by the campaign and election of Donald Trump – was laid to rest this weekend in the soft summer soil of a restless nation. He was eulogized by men out of power, political figures who had defeated him for the presidency but whose words of remembrance and reconciliation possessed special power.

But in an age defined by a furious velocity of news, it was also fitting that the memorial week for Mr. McCain will be followed, as swiftly as this coming Tuesday, by the confirmation hearings for Mr. Trump’s Supreme Court nominee – an occasion that will substitute partisanship for poignancy and will mark the resumption of the ferocious political warfare that is the talisman of the time.

Those hearings come amid the formal beginning of the vital midterm congressional elections and the continuation of the contention over connections between Russia and both the Trump campaign and administration.

The question of the day is whether, or how soon, the political battles of the time overtake the continental-wide memorials for a man who was welcomed back to freedom from captivity in the Vietnam era by Richard Nixon.

Indeed, Mr. McCain had the most affecting American farewell and funeral since that of Mr. Nixon, a president who stirred conflicting passions not matched until Mr. Trump’s ascendancy. Mr. Nixon was eulogized at those rites a quarter-century ago by Senator Robert Dole, who said the 37th president was a politician who – in words that could have been applied to Mr. McCain – ‘’valued accomplishment more than ideology.’’

The after-effect of the McCain memorials lingered.

“Come together. Have guts. Stand up,” Republican Governor John Kasich, a Trump opponent in the 2016 GOP presidential primaries, said in a paraphrase of the McCain credo issued on a CBS Face the Nation broadcast. “Leaders walk a lonely road. And John did not like people that did this – put their finger in the air and get the wind. He was so comfortable with himself. And it really didn’t matter to him who he was going to have to take on or what cause he was going to go for.”

Long before the last tattoo of Taps faded from the U.S. Naval Academy at Annapolis, Md., where Mr. McCain – son and grandson of admirals, father of a Navy helicopter pilot and a Marine – was buried, it was clear that the senator had choreographed his funeral as a potent symbol of determination and dissent.

For while the funeral orations at the McCain rites were reminders of his rivalries with George W. Bush, who defeated him for the Republican presidential nomination in 2000, and Barack Obama, who defeated him for the presidency eight years later, they were also unmistakable reminders of Mr. McCain’s final role, as the chief – and sometimes the only, lonely – GOP antagonist of Mr. Trump.

Mr. McCain had few regrets – one was his sadness over his involvement in a savings-and-loan scandal in the 1980s, the other was his devilish regret that he didn’t finish last in his Naval Academy class rather than fifth from the bottom.

But, in a way, the memorial period just completed was a week of regret from a political establishment that has been eclipsed by Mr. Trump, and a symbol of regret for the passing of a set of political byways extinguished by Mr. Trump, who is unlikely to repeat the McCain gesture by inviting former governor Jeb Bush or former secretary of state Hillary Clinton, his campaign rivals, to salute him at his valedictory events.

In their eulogies, Mr. Obama praised Mr. McCain for having “a largeness of spirit, an ability to see past differences in search of common ground” and Mr. Bush said that in Mr. McCain’s “one epic life was written the courage and greatness of our country.” Nobody – presumably including Ivanka Trump, the President’s daughter, and Jared Kushner, his son-in law, both in attendance – missed the point, a presidential tag-team jab at the man who succeeded them both.

Of all the lore involving Mr. McCain – his three broken limbs after he ejected from his plane over Vietnam, the torture at the hands of the North Vietnamese, the battle for campaign-finance reform – the most enduring memory for reporters who covered him was his 2000 presidential campaign, where he rambled through New Hampshire (in triumph over Mr. Bush) and South Carolina (in defeat at the hands of the Texas governor) in a bus named, tellingly, the Straight Talk Express. 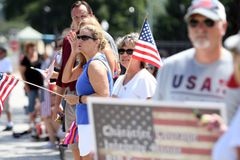 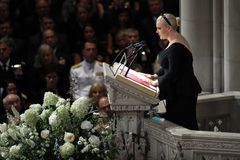 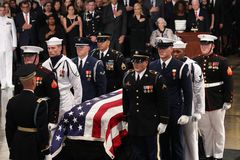