Hours before taking the stage, Mike Bloomberg came under attack from his Democratic rivals in a likely preview of his Wednesday night debate debut when the billionaire businessman meets his rivals onstage for the first time.

The attacks underscore how seriously Democrats are taking the former New York mayor’s campaign, now that he’s rocketed to double-digit support in national polls and qualified to appear in debates. Bloomberg was a lifelong Democrat before winning the New York mayor’s race as a Republican in 2002. He later switched to independent and formally registered as a Democrat last year.

He has faced relatively little national scrutiny in his surprisingly swift rise from nonpartisan megadonor to top-tier presidential contender.

But Wednesday night’s debate in Las Vegas, where Bloomberg faces five hungry opponents in the first major unscripted moment of his 2020 campaign, poses the greatest test yet of his unorthodox campaign.

“He is going to have a giant target on his back from all sides,” said Democratic strategist Brian Brokaw. “It’ll either all come together brilliantly or could fall apart very quickly.”

The attacks began before the debate’s 9 p.m. EST start.

On CNN Wednesday morning, Sanders’ national press secretary Briahna Joy Gray tried to rebut questions surrounding the Vermont senator’s health by pointing to Bloomberg, who she said had also “suffered heart attacks in the past.” Sanders suffered a heart attack last fall and released letters from doctors attesting to his health. But Bloomberg has never suffered a heart attack; he released a doctors’ letter last year that said he did undergo coronary stent surgery in 2000.

Gray later walked back her statement, saying on Twitter that she “misspoke” about Bloomberg’s health.

Separately, the Biden campaign took on Bloomberg over ads the former mayor is running that feature shots of him working closely with former President Barack Obama. The Biden campaign posted a video to Twitter highlighting past comments Bloomberg made criticizing Obama on health care and climate change and accusing him of failing to address racism during his term. The video also includes a clip of Bloomberg declaring “I’m a friend of Donald Trump’s, he’s a New York icon.”

Bloomberg had until recently largely escaped scrutiny from the media and attacks from his opponents by avoiding the early primary states and focusing instead on campaigning in the 14 states that vote in the March 3 Super Tuesday primaries. And his massive campaign – with over 2,000 staffers nationwide and over $400 million spent on ads already – has given him enough of a boost to win high-profile endorsements and double-digit support in the polls.

With much of the attention on Bloomberg, there is increasing fear from establishment-minded Democrats about Sanders’ strength in the race. After he finished at the top in Iowa and New Hampshire, polls suggest the self-described democratic socialist is poised for another strong showing in Nevada’s caucuses on Saturday.

After more than a year of campaigning, there is little clarity in the Democrats’ urgent search for a nominee to run against President Trump in November.

Longtime establishment favourite Biden, the former Obama vice-president, is fighting to breathe new life into his flailing campaign, which enters the night at the bottom of a moderate muddle behind former South Bend, Indiana, Mayor Pete Buttigieg and Minnesota Sen. Amy Klobuchar. Sanders, a Vermont senator, has emerged as the progressive wing’s preference after two contests as Massachusetts Sen. Elizabeth Warren struggles to regain energy for her campaign.

Some Democrats fear that conditions are ripe for a bare-knuckles brawl on national television that could carve new scars into a divided party that must ultimately come together this fall if it hopes to deny the Republican president a second term.

Bloomberg’s rivals have already indicated they will lean into his explosive comments on race and gender in addition to their charge that he’s using a fortune earned from a career on Wall Street in an effort to buy the presidency. Bloomberg’s rise in national polls has been fueled almost exclusively by an unprecedented national advertising campaign, carefully controlled campaign events and a sprawling national organization that has likely already cost him more than half a billion dollars.

“It’s going to be a chance to finally bring scrutiny to Bloomberg’s record as a Republican plutocrat,” she said.

Bloomberg’s team was working to lower expectations ahead of his performance, suggesting his debate skills are rusty after more than a decade since his last election.

Bloomberg hasn’t been on a debate stage since 2009. His team notes he never faced more than one rival at a time over three elections for New York City mayor.

Despite the challenges, senior adviser Tim O’Brien signalled that Bloomberg welcomed a fight against Sanders, whom the campaign perceives to be the race’s clear front-runner.

“I think you’re going to see us go toe-to-toe with Bernie Sanders on important issues,” O’Brien said in an interview, raising questions about Sanders’ personal wealth, record on criminal justice and gun control.

Bloomberg’s campaign released a list of more than a dozen debate guests, featuring survivors of gun violence from several states. They include one man present at the 2017 shooting in Las Vegas that left 58 dead and hundreds more injured.

The Vermont senator railed against Bloomberg and “a system that allows billionaires to buy elections,” while campaigning in Nevada on the eve of the debate.

“Here is the message: Anyone here worth $60 billion, you can run for president, and you can buy the airwaves. My friends, that is called oligarchy, not democracy.”

Senior Biden campaign aides on Wednesday offered a forecast of an aggressive candidate who would try to draw sharp contrasts with Bloomberg and Sanders.

In a conference call with reporters, the aides took particular aim at Bloomberg, calling him a “Republican billionaire” who is running “patently dishonest ads” suggesting that he has the backing of Obama. Biden aides said the former vice-president would note Bloomberg’s criticism of Obama’s policies, including the 2010 health insurance overhaul, while noting that Bloomberg did not support Obama’s election in 2008 and only offered a tepid endorsement very late in the 2012 campaign.

Bloomberg is not actually competing in Nevada’s Saturday caucuses or any of the four primary contests scheduled for this month, preferring to invest his time and resources in the delegate-rich states that begin voting in March. In the modern era, such a strategy has never worked. Yet it’s never been attempted by someone as wealthy as Bloomberg, who has already invested more than $400 million into a national advertising campaign and hired more than 2,000 campaign staffers.

The focus on Bloomberg on the debate stage means there will be less oxygen for others at a critical moment.

Buttigieg allies in particular see Sanders as the real threat and are frustrated by the fixation on Bloomberg. Buttigieg has begun drawing sharp contrasts with Sanders and is expected to continue doing so on the debate stage, letting the rest of the field pile on Bloomberg. 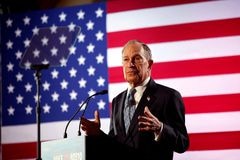 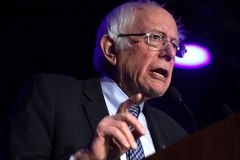 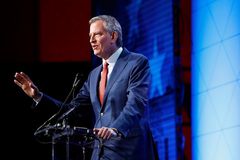