Several protesters and a person who illegally entered a secure area were arrested in the hours before North Carolina’s scaled-back share of the Republican National Convention on Monday, local police said, noting that the event itself was conducted without disruption.

The streets outside of the Charlotte Convention Center were marked Monday by heavy security and little foot traffic as about 300 delegates met inside for several hours to formally renominate President Donald Trump. The event had once been expected to attract thousands to the city before the COVID-19 pandemic altered plans. Now, most of the convention’s prime-time speakers are expected to deliver their remarks from Washington and elsewhere to a largely virtual audience.

While dozens protested each of the three nights preceding the gathering in Charlotte, only a few were out demonstrating Monday during the event that featured a surprise appearance by Trump himself.

By Monday afternoon, work crews were dismantling the barriers and other security equipment to return the area to normal foot and vehicle traffic. With the city’s portion of the convention ended, the Charlotte-Mecklenburg Police department said in a news release that Monday’s delegate meeting had been “free of disruption.”

Among the smattering of protesters was Mosie Boyd, who stood in Charlotte’s main business district with a sign that said, “Team Joe’s Got True Grit,” in a nod to Trump’s Democratic opponent, Joe Biden.

“I’m here to support democracy and our liberties and our freedom. I believe the United States of America and the democracy we’ve known are under attack,” said Boyd, who described herself as an enthusiastic Biden supporter.

When Kris Newton heard Trump and Vice-President Mike Pence would be in Charlotte, he decided to show up and protest.

“The things that have been put in place over the last four years have taken this country in an awful place,” he said.

A small number of Trump supporters also gathered outside the security perimeter.

“I thought he would do the things that he’s said he’s done, and it seems like I was right so I’m here because this is an important election,” Ken Lane said.

Dana Knox proudly waved her “Trump 2020” flag as a steady stream of traffic passed by in Uptown Charlotte.

She’s ready for Election Day but doesn’t want to get overconfident.

Before the renomination roll-call vote began, RNC security officials said a man was arrested Monday morning after entering the security perimeter outside the convention centre but that he didn’t disrupt any events or encounter any delegates. Police later said the suspect had jumped a short fence along the city’s light rail line but that they don’t believe his motive was to interfere with the RNC. He was charged with trespassing and resisting or obstructing an officer.

The previous night, five protesters were arrested during demonstrations that drew at least 75 protesters to the business district and the area outside the hotel where delegates were staying, police said. Just before midnight, police said demonstrators began to move barricades, construction cones and trash cans to block roads. While protesters were marching away from the area, they surrounded a pickup truck that was trying to pass through the crowd, authorities said. Police had also made several arrests each on Friday and Saturday night. No serious injuries were reported. 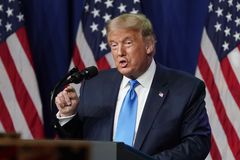 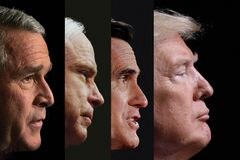