As Craig Brooksby stood maskless, surrounded by several thousand fellow Trump supporters awaiting the President’s arrival at the Pitt-Greenville Airport in North Carolina, he pronounced himself unconcerned about contracting COVID-19.

If Donald Trump could survive the virus, reasoned Mr. Brooksby, a 56-year-old real estate developer, so could he. “He got it, beat it and he’s back out on the campaign trail. So how bad is this disease, really?”

On the other side of town Thursday, in a majority-Black and heavily Democratic neighbourhood of narrow clapboard houses, residents queued for up to two hours at a community centre for the first day of early voting. Every person in line wore a mask. Many said the President’s insouciance about the novel coronavirus had gotten them to the polls. “People are struggling. People are dying,” said Mavis Clark, 59, a retired former Navy chef, as she waited to cast a ballot. “And he doesn’t care.”

The political battle lines of the pandemic run straight through this swing state of 10.5 million people. It’s a must-win place for Mr. Trump, who prevailed by three percentage points in 2016 but is now polling neck and neck with rival Joe Biden. The Democrats won the state in 2008, largely on the strength of high turnout among Black voters, and hope to replicate that result to expand their electoral prospects in the South.

The President’s bid hinges on persuading voters that he has COVID-19 under control, despite an outbreak at the White House that sent him to hospital for three days and infected more than 30 people in his circle. Since Mr. Trump returned to the campaign trail on Monday, he has held rallies in four states and plans to keep up this torrid pace until the Nov. 3 election. In Greenville, he insisted that COVID-19 would go away on its own, even without a vaccine.

“My plan is already crushing the virus,” he declared. “It’s ending anyway. They go crazy when I say it. It’s going to peter out.”

COVID-19 has killed more than 220,000 people in the U.S., the most of any country and a death rate 2½ times that of Canada. The number of cases is currently rising, both nationally and in North Carolina.

At Mr. Trump’s airport rally, supporters packed closely together in the muggy, 26 C sunshine. Swaths of people did not wear masks. “It’s a really small little germ. It’s probably all over the place right now,” said Stuart Wilson, a 61-year-old software engineer, as he explained why he chose not to wear a face covering.

In contrast, Mr. Biden has been holding only small events with a handful of people spaced more than six feet apart. On Thursday, his vice-presidential running mate, Kamala Harris, even cancelled her travel for several days after one staffer and a member of the flight crew tested positive. The Democrats' caution has also played into Mr. Biden’s front-runner-style campaign, limiting his exposure and keeping the focus squarely on Mr. Trump.

Mr. Biden’s strategy appears to be working. He has maintained a consistent poll lead since the spring. In the two weeks since Mr. Trump’s diagnosis, the gap has widened, with some surveys giving him an edge of more than 10 percentage points. Much of this movement has been because of senior citizens, who are at a higher risk of serious complications from COVID-19. One NBC News poll earlier this month showed Mr. Biden with 62 per cent of the demographic’s vote.

Mac McCorkle, director of the Polis Center for Politics at Duke University, said that, in doubling down on his efforts to minimize the pandemic after his own diagnosis, Mr. Trump is banking on motivating core supporters rather than winning over new ones.

“It’s a very high-risk, high-wire strategy. It’s saying ‘I don’t have to do what other politicians do, which is expand the base, but rather I have to intensify the base,’” Prof. McCorkle said. “The man has an impressive base. The question is, is that enough?”

The candidates' respective approaches have filtered down to their parties' front-line activists. Republicans are continuing to use traditional, in-person, get-out-the-vote tactics, such as canvassing door to door. Democrats, meanwhile, are doing most of their campaigning online or over the phone.

DeLancey Lane, a Democratic organizer in Greenville, said she and other volunteers often hold Zoom phone banks, in which they meet virtually while making calls to their neighbours to persuade them to vote.

“Our priority is peoples' safety, so we’re doing it online. I think it’s still going to work,” she said. “Folks have seen how Trump has mishandled the pandemic. They don’t want people at their door.”

A once reliably-red state, North Carolina’s demographics – including a 22-per-cent Black population and a growing technology sector – have made it increasingly competitive. This is particularly evident in Greenville, a town of 93,000, where East Carolina University and health care companies have supplanted tobacco as the economic engine.

Working in the Democrats' favour are also a pair of court decisions that overturned Republican laws that made it harder to vote in the state. The rules, one judge found, had been specifically designed to discourage Black voters from going to the polls. Black Americans tend to vote Democratic by a ratio of roughly nine to one.

Reginald Jones, 42, cited Mr. Trump’s attitude toward police killings of unarmed Black people and the unequal burden of the pandemic, which has disproportionately hit Black and Latino Americans, as motivators to vote. In his speeches, the President regularly portrays anti-racism protesters as a violent mob.

“It feels very important his year,” said Mr. Jones, who owns a trucking company, as he waited at the polling station. “When a person shows you and tells you he cares nothing for minorities, you have got to be out here taking action.”

Mr. Brooksby, meanwhile, said he simply did not believe things were as dire as the experts say. The U.S.'s coronavirus numbers, he argued, must have been inflated by left-leaning doctors. There is no evidence that this is the case, and epidemiologists believe the U.S. has sometimes underreported COVID-19 deaths.

“Let everyone get the disease and become immune to it,” Mr. Brooksby said. “This is a dead issue.” 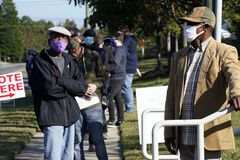