Liberal challenger Jill Karofsky won a hotly contested race for the Wisconsin Supreme Court on Monday, beating a conservative incumbent in state elections marred by court challenges and worries about health risks from the coronavirus pandemic.

The Supreme Court race highlighted a slate of thousands of elections held last week for state and local offices, as well as a presidential primary. The release of the results was delayed by court order until Monday, the deadline for receiving absentee ballots.

“Despite the result, the fact that this in-person election took place was a searing loss for Wisconsin,” said Ben Wikler, chairman of the Wisconsin Democratic Party. “Wisconsin voters will not forget this travesty.”

The tumultuous process in Wisconsin, which featured an explosion in absentee balloting and long lines of voters braving health risks and stay-at-home orders, was seen as a potential preview of the national election in November if the pandemic lingers.

“The circumstances under which this election was conducted were simply unacceptable, and raise serious concerns for the future of our democracy,” Karofsky said after her win.

State Republicans had warned of possible fraud and administrative issues if the elections were delayed. But Democrats said Republicans primarily wanted to keep down turnout in the race, particularly in Democratic-dominated urban areas such as Milwaukee, where a lack of workers meant the closure of all but five of the city’s usual 180 polling places.

Karofsky more than doubled Kelly’s vote totals in Milwaukee, and outpaced recent Democratic performances in many swing and conservative counties in an encouraging sign for Democrats looking toward the Nov. 3 general election. Trump’s upset win in Wisconsin in 2016 helped propel him to the White House.

In Winnebago County in east-central Wisconsin, for example, Trump beat Democrat Hillary Clinton by 7 percentage points in the 2016 presidential election, but Karofsky won by more than 8 percentage points.

The result narrows the conservative majority on the non-partisan Wisconsin Supreme Court to 4-3, with the next seat up for election in 2023. The court is expected soon to decide a case that seeks to purge more than 200,000 people from Wisconsin’s voter rolls.

Spurred by worries about health risks from voting in person, a record-high nearly 1.3 million absentee ballots were requested for the elections, state officials said. Some residents who requested absentee ballots said they never received them.

The state elections commission reported that as of Monday, more than 11,600 voters requested an absentee ballot and were never sent one, and more than 185,000 ballots were sent to voters but not returned.

Democratic National Committee Chairman Tom Perez said in a Monday call with reporters the decision to hold in-person voting last week was “voter suppression on steroids,” forcing thousands to choose between casting a ballot or staying at home to avoid infection.

The DNC called for Wisconsin’s next election, a special congressional race scheduled for May 12, to be entirely conducted by mail.

Biden, who became the likely Democratic nominee to face Trump in November’s election when Sanders dropped out last week, easily defeated Sanders, who dropped out the day after the Wisconsin voting was finished and endorsed Biden on Monday. 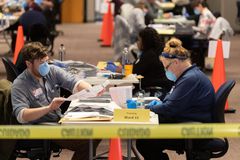 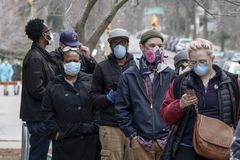 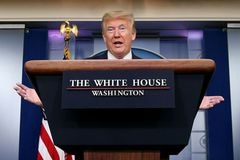