Donald Trump’s hold on the Republican Party was on full display at an annual gathering of prominent U.S. conservatives on Friday as ally Senator Ted Cruz said the former president “ain’t going anywhere” despite violent scenes in Washington last month.

Prominent congressional conservatives – including Senators Tom Cotton and Josh Hawley, and Representatives Steve Scalise and Matt Gaetz – were among the Trump loyalists expected to speak at the Conservative Political Action Conference in Orlando, Fla., which Mr. Trump will address on Sunday.

He also joked about the controversy he generated by flying to a seaside resort in Mexico last week as millions in his home state of Texas were struggling without water or power during a severe winter storm that killed at least two dozen people.

“Orlando is awesome. It’s not as nice as Cancun – but it is nice!” said Mr. Cruz.

Mr. Trump is expected to talk about the future of the party and lay out policy differences within a group riven by discord in the wake of his chaotic four years in office.

“The divide right now is between the ‘Beltway elites’ and the conservative grassroots around the country,” said a Trump adviser who helped prepare the speech.

Mr. Trump’s tumultuous final weeks in office saw his supporters launch a deadly attack on the U.S. Capitol on Jan. 6 in an attempt to block Congress from certifying Mr. Biden’s election victory, a win that Mr. Trump falsely claimed was tainted by widespread fraud.

Trump supporters at the conference on Friday repeated some of his false claims, arguing that they justified new restrictions on voting.

A total of 17 Republicans in Congress voted to impeach or convict Trump for inciting insurrection, although the Senate vote fell short of the two-thirds majority needed to convict. Some prominent Republicans, including Senate Minority Leader Mitch McConnell, blasted Mr. Trump for his role in sparking the conflagration, but more members still voice support for him.

Even Mr. McConnell was unwilling to keep pressure on Trump, saying in a Fox News interview on Thursday that he would vote for the former president if he were the party’s 2024 nominee – though he described the contest as wide-open.

Some advisers say they want Mr. Trump not to use his speech to relitigate the election at length but instead offer a road map to Republicans’ regaining control of the House of Representatives and the Senate in the 2022 congressional elections.

Senator Lindsey Graham, one of Mr. Trump’s closest allies in Congress, told reporters in the Capitol that he expected Mr. Trump to talk about his policy achievements, the drawbacks of Mr. Biden’s approach to immigration and energy and to lay out a hopeful future for his “America First” agenda.

Senator Graham said he told Mr. Trump it “would be a big mistake” to focus on the past election. Asked whether he thought Mr. Trump would follow that advice, Mr. Graham responded: “We’ll see.”

Mr. Trump, 74, is expected to dangle the possibility of running for president again in 2024, a prospect that complicates life for other Republican presidential hopefuls, including former secretary of state Mike Pompeo and former vice-president Mike Pence.

Mr. Pence, who was in the Capitol with his family when rioters stormed in chanting: “Hang Mike Pence!” is not expected to attend this year’s CPAC.

Mr. Trump had repeatedly said Mr. Pence had the power to stop the certification of the election results, even though he did not.

CPAC is an event organized by the American Conservative Union, whose chairman, Matt Schlapp, is close to Mr. Trump. It is a prime venue for speakers who want to gauge interest in whether they should run for president based on the enthusiasm they generate.

Many Republicans think Mr. Trump will flirt with another run to freeze the 2024 field but believe he will ultimately opt out of running. Mr. Trump himself has mused privately to advisers that he would like to run. 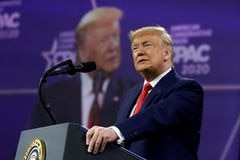 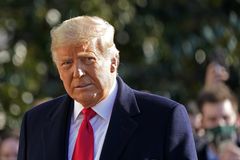 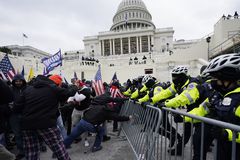