U.S. President Donald Trump is struggling to control COVID-19 and the damage it has wreaked on the U.S. economy, and facing the country’s largest racial reckoning since the 1960s. Less than a year ago, he underwent an impeachment trial. And he has not achieved some of his central policy goals – the wall along the Mexican border is only slightly longer than when he took office, and China has not changed its trade practices.

But Mr. Trump could still win a second term. Even as Democratic challenger Joe Biden has maintained a clear lead in national polling since March, the contest is tightening in key swing states: Florida and Arizona are all but tied, while Mr. Biden holds a narrow lead in Pennsylvania. The President’s supporters have come out by the thousands, both for rallies staged by the campaign and for their own self-organized events.

Complicating it all is the once-in-a-century pandemic, which has upended how people cast their ballots and traditional methods of predicting turnout. It could mean the results of the race aren’t known for weeks, as mail-in ballots are tallied and the two parties fight in the courts and on the streets over which votes will count.

A look at seven close races in the U.S. election

If Canada could vote, Joe Biden would win in a landslide

The U.S. election results could influence immigration to Canada

On the ground in the swing states that will decide the election, Mr. Trump’s willingness to continue holding mass gatherings has given him a visible momentum that Mr. Biden, who has opted for smaller-scale, physically distanced events, has lacked. The pandemic has so far sickened more than nine million Americans and killed nearly 240,000. Researchers at Stanford University, who examined 18 of the President’s nearly 70 pandemic-era rallies, found that the events likely led to 30,000 COVID-19 cases and 700 deaths.

Mr. Trump’s supporters shrug off the danger. Pam Fura, a 59-year-old Trump supporter in Michigan, said she believed Mr. Biden’s son, Hunter, had somehow conspired with Beijing to cause the pandemic because of his business interests in China. “There’s so much underground stuff,” she told The Globe and Mail outside a rally in Lansing.

Her assertion has no basis in fact. But such conspiracy theories are a common topic at Trump campaign events. The President has claimed that hospitals are lying about the severity of the pandemic to get more money. And his demand that Ukraine investigate Hunter Biden led to his impeachment trial earlier this year, in which he was acquitted by the Senate.

Mr. Trump has also stirred up his overwhelmingly white supporters by labelling protesters against racism and police brutality as “terrorists.” And he has branded all of his opponents, from Mr. Biden to the protesters, as “radical” socialists.

Ellen Gifford, a 63-year-old hair salon owner from Baltimore, said she had only casually supported Mr. Trump before this year. The rise of anti-racism protests in the spring pushed her to actively campaign for the President. “I’m sick of being called a racist. Black Lives Matter, they’re a Marxist organization. Same with antifa. This has got to stop. They’re definitely communists,” said Ms. Gifford, who is white.

While one of the founders of Black Lives Matter has previously described herself as a Marxist, the group is not Marxist or communist. Antifa, short for anti-fascist, is not an organization but a movement against racism.

The border wall with Mexico also remains a powerful motivator for Mr. Trump’s supporters. But out of nearly 650 kilometres built under Mr. Trump, only about 15 km cover new ground. The rest replaces previous fences and other barriers. As well, Mexico has not paid for the wall, as Mr. Trump promised.

His supporters do not blame him. The problem, contended one of Mr. Trump’s backers from North Carolina, is that even the President’s own Republican Party is trying to thwart him, which is why he could not get the funds to build the wall during the two years when he had a majority in both houses of Congress.

“He hasn’t gotten the support. Even if he had control, he’s had battles,” said Jeff Wainwright, 66, a retired federal aircraft inspector.

The election result could ultimately hinge on court battles over whether to make voting easier, with options such as drive-through voting, and whether to extend the time in which mail-in ballots are counted. Mr. Trump has vowed to challenge any Pennsylvania ballots that arrive at election offices after 8 p.m. on Tuesday.

Some groups are planning to take to the streets if Mr. Trump moves to declare victory before all votes are counted. The President’s supporters, meanwhile, have confronted voters at polling stations in heavily Democratic areas. Businesses in downtown Washington boarded up Monday in anticipation of postelection protests.

Mr. Biden’s hopes hinge on reassembling former president Barack Obama’s diverse, youthful voting coalition. The former vice-president must particularly motivate Black voters whose turnout fell in 2016. Despite a surge in early voting that saw nearly 100 million people cast ballots this year, turnout among Black voters has only held steady from 2016 and not increased.

Many of Mr. Biden’s supporters indicate they are less enthusiastic about him than they are about the prospect of getting rid of Mr. Trump.

Reginald Jones, a 42-year-old trucking company owner in North Carolina, said he was supporting the Democrats because Mr. Trump was exacerbating systemic racism. “I don’t know what they can do, but it can’t be worse than what we’ve got going on there right now,” said Mr. Jones, who is Black.

In many ways, from his visibility at rallies to his strong connection with supporters, Mr. Trump has defined the race while the Democrats have often remained in the background. But this may not be a bad thing after all.

Jenna Bednar, a political science professor at the University of Michigan, pointed to one unusual metric in her state: In 2016, nearly 88,000 Michiganders marked ballots for congressional races but left their choice for president blank. Most likely, she contended, those voters would break for Mr. Biden now that the unpopular Hillary Clinton is not on the ballot.

“Having Biden as the Democratic candidate, he’s so innocuous, he’s an easy candidate to like,” she said. “This is a referendum on Trump, and when I think about those people who didn’t vote for president, I can’t imagine that more than half are going to now vote in support of him.” 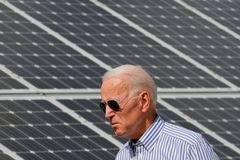 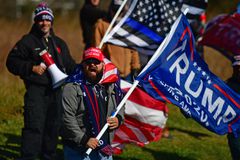 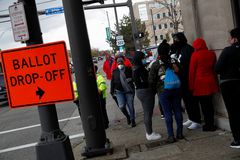