The 2020 presidential election is shaping up as a classic confrontation. It pits Shania Twain against Dean Martin.

In this campaign, President Donald Trump plays the role of the singer-songwriter from Timmins. One of her most famous lyrics from her 1993 album asserts “You got to dance with the one that brought you.” His opponent, former vice-president Joe Biden, is the crooner from the battleground state of Ohio. His song from his 1960 album proclaims: “Just in time, I found you just in time … now I know just where I’m going.”

In this campaign, Mr. Trump is focusing almost exclusively on the ones that brought him to the White House – his largely white, male, blue-collar and rural base. His campaign events aren’t courtships of the undecided; they are reunions of the faithful. His rhetoric, his White House tweets, his proclamations about historical statues (“The radical left, they hate our history,” he said in Arizona this week), and his undercurrent messages about race – they are not designed for persuasion but instead for affirmation.

And in this campaign, Mr. Biden is focusing almost exclusively on creating new supporters who, in the tumultuous atmosphere of 2020 America, might coalesce just in time to end the Trump era – Blacks, suburban women, moderates who found Hillary Clinton offputting four years ago but who might find the Delawarean’s style – effortless and charming, like a Dean Martin ballad from a smoky nightclub – congenial to their tastes and to the times. His rhetoric, his home-basement broadcasts, his efforts to win over both left-leaning Democrats who sided with Senators Bernie Sanders and Elizabeth Warren as well as Republicans who voted for Mitt Romney and John McCain reflect the hopes embedded in the title of the 1964 Dean Martin hit The Door Is Still Open to My Heart.

Mr. Trump created a new coalition in 2016 and, with bombast and law-and-order language, aims to keep it, motivate it and ride it to a second term in the White House. Mr. Biden is seeking a new political coalition with speeches that combine comfort (to soothe a troubled nation, beset with unemployment and disease) and determination (to build a new sense of national purpose and political priorities).

The danger for Mr. Biden is that the coalition he is seeking to build is fragile; there is little affinity between the young and left-leaning who see the recession and the coronavirus as levers to win fundamental changes in American society, especially in tax policy and health care, and the moderates who are part of Mr. Biden’s quarry because they are repelled, or simply exhausted, by Mr. Trump, his comportment and his policies.

The danger for Mr. Trump is that there may be a ceiling on his efforts; he has never won the approval of a majority of Americans and nothing he has done in the three-and-a-half years he has been in office has substantially increased his political support.

“This strategy presumes that his base will do what they did in 2016,” said the Stanford political scientist David Brady. “The problem is that Trump 2020 is not Trump 2016. He has been president for four years and his actions have cost him the votes of suburban women and Independents and has energized the Democrats who did not turn out in 2016.‘'

The contrasts between the two campaigns are manifest.

This year one of them employs the rhetoric and techniques of division. The other employs the rhetoric and techniques of national unity. One taps into American Revolution-era 18th-century passion for personal liberty – and translates it into the freedom to eschew physical distancing, to associate in crowds with others and to defy recommendations to wear protective masks. The other is rooted in New Deal-era notions of a strong central government providing elements of personal security – and translates them into heeding the cautions of medical personnel, avoiding large crowds and wearing protective masks in public.

Mr. Trump and his team are determined to retain many of the colourful elements of the quadrennial conclaves – huge crowds pressed together on an arena floor and rollicking drinks parties after the sessions come to an end at 11 p.m. The Democrats announced this week they will hold a virtual nominating convention instead – without raucous parades of delegates and the kind of preposterous pageantry that prompted the American social commentator H.L. Mencken, speaking of the 1924 Democratic convention that took 193 ballots to select a nominee with no chance of winning the election, to say these events were “as fascinating as a revival or a hanging.”

Right now the Biden strategy of outreach is reaping greater benefits than the Trump strategy of cultivating his own political garden. This week’s New York Times/Siena College poll found Mr. Biden – who leads Mr. Trump among women and non-white voters and who is eroding the President’s backing among white voters – with a 14-percentage-point lead.

But political professionals know that such leads weeks from the election sometimes mean little.

Governor Michael S. Dukakis of Massachusetts held a 17-point lead over Vice President George H.W. Bush in the summer of 1988, only to lose decisively in the autumn election. “We all thought we were going to have jobs in the Dukakis administration,” Mark D. Gearan, a top Dukakis campaign aide who now is director of the Institute of Politics at Harvard’s Kennedy School of Government, said in an interview. “We went on to lose 40 states. ‘President’ Dukakis can tell you these polls can be false comfort.” 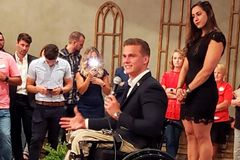 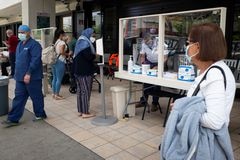 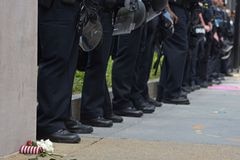