In the bitter cold of a snowy New Hampshire February, there are clear signs of a change of seasons in American politics.

Hours before New Hampshire’s voters go to the polls Tuesday, the candidates of the hour are a 38-year-old mayor of a city smaller than Thunder Bay and a 78-year-old democratic socialist from the second smallest state in the Union.

There’s still time for the political weather to change here; this is, after all, a Democratic struggle to press change on a country where President Donald Trump has a firmer grip on power than at any time in his presidency. Pete Buttigieg of South Bend, Ind., and Sen. Bernie Sanders of Vermont are on top right now. But New Hampshire has a habit, dating back decades, of toppling front-runners.

Even so, the emergence of these two – plus Sen. Elizabeth Warren of Massachusetts, right behind them – is an indicator of a dramatic political solstice, a change of season that portends massive gender, generational and ideological shifts for the party and for American politics.

Iowa whispered that the talk about “passing the torch” to a new generation or gender of leadership – the image comes from the First World War-era poem In Flanders Field by the Canadian physician John McCrae and was the leitmotif of the candidacies of Mr. Buttigieg, Ms. Warren and Sen. Amy Klobuchar of Minnesota – might have resonance 60 years after John F. Kennedy employed the same phrase in his 1961 inaugural address.

But for all the signs of political climate change in a mild Granite State winter where, suddenly in the past week, the snow piled high and the temperatures dipped low, there was the persistent presence of Mr. Sanders, the old leftist warhorse who once was photographed in the Soviet Union under a portrait of Vladimir Lenin, who entered a multi-candidate forum Saturday night to the strains of John Lennon’s Power to the People and twice brandished the word “revolution.”

Mr. Sanders, who Sunday addressed a raucous rally in the old textile-mill town of Claremont (population 12,967), was shaped in a different world. He was born the week two creaky figures from the faraway past, William Lyon Mackenzie King and Franklin Delano Roosevelt, exchanged wires, two personalities and one technology far beyond the ken of voters today. But he promises a brave new world of universal health care, punitive taxes on the wealthy and a transformation of the American economy.

And yet the most dramatic transformation visible this season in the rugged landscape of the Granite State involves former vice-president Joe Biden.

Once the “electability” front-runner with an amiable, avuncular mien, in the last days before New Hampshire votes he has emerged as the cranky old man of politics, ridiculing Mr. Buttigieg as an upstart ingenue and Mr. Sanders as a hopeless ideologue.

Mr. Biden’s early political potential cleared figures such as Senators Kirsten Gillibrand of New York and Cory Booker of New Jersey from the field. But his fade – a fourth-place finish in Iowa, stumbling performances here – has cleared a fresh opening for Mr. Sanders, who won this contest in 2016 and whose profile is a classic example of what political scientists call a “factional” candidate.

“Factional candidates can win,” the Dartmouth College political scientist Brendan Nyhan explained in a weekend conversation in Hanover, N.H. “Donald Trump was a factional candidate, with a highly committed group of supporters. Bernie Sanders could be that candidate this time around. The question here is whether the party coalesces around someone else.”

That, in a phrase, is the theme of the New Hampshire campaign, with Mr. Buttigieg struggling with Ms. Warren and Ms. Klobuchar to be the “someone else” as the race moves forward to more clement climates.

Add to that a vital caveat: Candidates who start strong do not always finish strong. One example from Mr. Sanders’s state of Vermont will suffice – former Governor Howard Dean, a one-time front-runner in the 2004 campaign who faded swiftly.

The sign in the door of the Revelstoke Coffee Shop across the street from the state Capitol in Concord – the great morning hangout for local Democratic strategists and activists – explains how Americans will learn whether Mr. Sanders escapes the fate of Mr. Dean: “We’ll be closing at noon on 2/11, so we can all vote. You should too.” 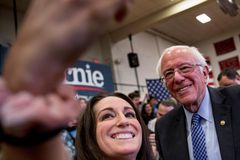 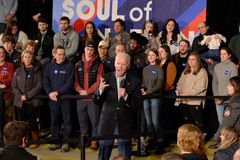 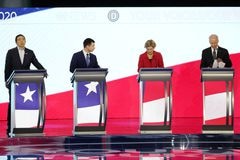