U.S. President Donald Trump ousted his top diplomat after months of friction, reshaping the country’s approach to foreign affairs to better reflect his view of the world.

Mr. Trump fired Secretary of State Rex Tillerson and named Mike Pompeo, the director of the U.S. Central Intelligence Agency and a staunch ally of the President’s with hawkish views on foreign policy, to replace him.

Mr. Pompeo’s nomination to lead the State Department, which is subject to confirmation by the Senate, comes at a moment of high tension in U.S. diplomacy. Last week, Mr. Trump agreed in principle to a face-to-face meeting with North Korean leader Kim Jong-un and instigated a potential trade war over steel tariffs with some of the United States’ closest allies.

For Canada, Mr. Tillerson’s exit means the departure of a mainstream Republican whose views on trade did not conform to the President’s “America First” approach. Mr. Tillerson appeared to have a cordial relationship with Ottawa during an often-tense period in Canada-U.S. relations, even as Mr. Trump frequently accused his neighbours to the north of cheating on trade and threatened to tear up the North American free-trade agreement.

Just hours after firing Mr. Tillerson, Mr. Trump arrived in California on a one-day visit that marked his first trip to the state since the 2016 presidential primaries; he is the first president in more than 60 years to skip the country’s most populous state during his initial year in office.

Mr. Trump singled out the 2015 Iran nuclear deal, which Mr. Tillerson supported, in a speech at a marine air station in San Diego. He said he wanted to continue working with international allies to block Iran’s access to nuclear weapons. “Everywhere we go in the Middle East it’s Iran, Iran, Iran behind every problem,” Mr. Trump said.

Mr. Trump also reiterated his promise to construct a wall with Mexico and to crack down on lawmakers who seek to protect undocumented immigrants.

Now Mr. Pompeo, a Harvard-educated lawyer and army veteran, will become an important force in navigating America’s foreign-policy challenges, including the U.S. relationship with Russia. To be effective, he will need to maintain the confidence of an unpredictable President and the respect of America’s career diplomats, both of which Mr. Tillerson conspicuously failed to do.

Mr. Trump made no secret of his dislike for Mr. Tillerson, particularly after reports emerged last fall that the Secretary of State had called the President a “moron.” Mr. Trump repeatedly undermined Mr. Tillerson’s diplomatic efforts, using Twitter to belittle or contradict him. Experts had expected Mr. Tillerson to leave for months, but the ultimate timing came as a surprise.

The former chief executive of ExxonMobil, Mr. Tillerson did not know Mr. Trump prior to the 2016 election. Speaking outside the White House on Tuesday morning, Mr. Trump framed his problem with Mr. Tillerson as a disagreement over policy matters such as the fate of the Iran nuclear agreement. Mr. Tillerson had a “different mindset, a different thinking,” Mr. Trump said. “I think Rex will be much happier now.”

Over the past year, Mr. Trump said he had gotten to know Mr. Pompeo, who frequently briefs the President on intelligence matters. He and Mr. Pompeo have a “very similar thought process” and “very good chemistry,” the President said.

“President Trump likes Mike Pompeo and is likely to listen to and empower him, and this could empower the State Department, which has been sidelined under Secretary Tillerson,” said John Bellinger, who served as a top legal adviser at the State Department and National Security Council under President George W. Bush. “But Pompeo has relatively little experience in foreign policy and may encourage some of the President’s most dangerous instincts.”

In a farewell speech at the State Department, Mr. Tillerson mentioned the President only to note that the two men had spoken on Tuesday afternoon, hours after Mr. Trump had first tweeted about his ouster.

Mr. Tillerson also used his remarks as an opportunity to sound a warning about Russia, stating that “much work remains to respond to the troubling behaviour and actions on the part of the Russian government.” A day earlier, Mr. Tillerson condemned the poisoning of a former Russian spy in the United Kingdom, saying it was an “egregious act” which “clearly” originated in Russia.

Mr. Tillerson “obviously attempted to be reassuring to friends and allies, but that’s a difficult task when he doesn’t speak for the President,” said James Steinberg, who served as deputy secretary of state during the Obama administration. “If you don’t have the confidence of the President, there’s no point in getting up in the morning and doing the job.”

Mr. Steinberg added that Mr. Tillerson surrounded himself with a small cadre of outside aides and froze out senior diplomats. His tenure was characterized by low morale, high-profile resignations and unprecedented vacancies at the top of America’s diplomatic apparatus. For instance, three crucial positions focusing on the Korean peninsula – the assistant secretary for East Asian and Pacific affairs, the U.S. ambassador to South Korea, and the special representative for North Korea policy – are currently unfilled.

Mr. Tillerson “managed to alienate almost every major power centre that a Secretary of State would want to foster,” said Daniel Drezner, a professor of international politics at the Fletcher School of Law and Diplomacy at Tufts University. Mr. Pompeo could make an immediate impact by properly staffing the top levels of the State Department, Prof. Drezner said.

Mr. Pompeo is not expected to face a contentious confirmation process, but the same is not true for his successor at the CIA. Mr. Trump is naming Gina Haspal, currently the deputy director, to replace Mr. Pompeo. If confirmed, she would be the first woman to lead the spy agency. But Ms. Haspal’s role in interrogating detainees after the Sept. 11, 2001, attacks will raise opposition.

“The torture of detainees in U.S. custody during the last decade was one of the darkest chapters in American history,” wrote Republican Senator John McCain on Twitter. “The Senate must do its job in scrutinizing the record & involvement of Gina Haspel in this disgraceful program.”

With a report from Greg Keenan 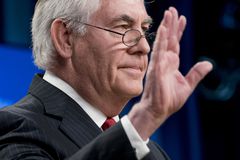 Opinion
With Rex Tillerson out, Canada loses an ally
March 13, 2018 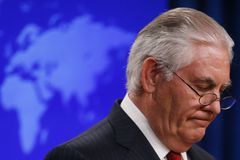 Follow Joanna Slater, Adrian Morrow and Tamsin McMahon on Twitter @jslaternyc @adrianmorrow @tamsinrm
Report an error Editorial code of conduct
Due to technical reasons, we have temporarily removed commenting from our articles. We hope to have this fixed soon. Thank you for your patience. If you are looking to give feedback on our new site, please send it along to feedback@globeandmail.com. If you want to write a letter to the editor, please forward to letters@globeandmail.com.
Comments are closed