Roger Stone, a long-time confidant of U.S. President Donald Trump, was sentenced to more than three years in prison Thursday for obstructing a congressional investigation in a case that has sparked fears about presidential interference in the justice system.

The case was marked by the Justice Department’s extraordinary about-face on a sentencing recommendation and a very public dispute between Mr. Trump and Attorney-General William Barr, who said the president was undermining the department’s historical independence and making “it impossible for me to do my job.”

The president responded by asserting that he was the “chief law enforcement officer of the federal government.”

Mr. Stone was convicted in November on all seven counts of an indictment that accused him of lying to Congress, tampering with a witness and obstructing the House investigation into whether the Trump campaign co-ordinated with Russia to tip the 2016 election.

He was the sixth Trump aide or adviser to be convicted on charges brought as part of special counsel Robert Mueller’s investigation into possible Russian interference in the 2016 election.

Justice Jackson pointedly told Mr. Crabb that he might know less about the case than anyone in the room.

Justice Jackson said the evidence clearly showed that Mr. Stone testified falsely to Congress and repeatedly pressured a potential witness to either back up his lie or refuse to testify.

Near the end, Justice Jackson’s voice rose in anger as she said that Mr. Stone’s entire defence strategy seemed to amount to “So what?” Mr. Stone did not testify and called no witnesses on his behalf.

“This is not campaign hijinks. This was not Roger being Roger. You lied to Congress,” she told Mr. Stone. “The dismay and disgust at the defendant’s actions in our polarized climate should transcend (political) parties.”

Mr. Stone remained largely expressionless throughout the proceedings. As he left the Washington courthouse and got into a black SUV without speaking to reporters, crowds of protesters engaged in duelling chants of “Pardon Roger Stone!” and “Lock him up!”

His lawyer Bruce Rogow said Mr. Stone and his team would have no comment. The judge delayed execution of his sentence while she considers Mr. Stone’s motion for a new trial.

Even before Mr. Trump said he would hold off a decision on a pardon, Republican and Democratic legislators were staking out positions on one.

Democratic House intelligence chairman Adam Schiff of California tweeted after the sentencing that “to pardon Stone when his crimes were committed to protect Trump would be a breathtaking act of corruption.”

But Senator Lindsey Graham, a staunch Trump ally, signalled early support for such a move, tweeting that Mr. Trump has “all the legal authority in the world” to pardon Mr. Stone if he chooses.

The sentencing came amid Mr. Trump’s unrelenting defence of his long-time confidant. The president has repeatedly maintained that the jury was tainted against him and his allies.

While clearly displeased with the mixed messages from the Justice Department, Justice Jackson said she agreed that the initial sentencing recommendation was too harsh.

The evidence presented at Mr. Stone’s trial didn’t directly address Mr. Mueller’s conclusion that there was insufficient evidence to prove a criminal conspiracy between the Trump campaign and Russia to tip the outcome of the 2016 presidential election. But it provided new insight into the scramble inside the Trump campaign when it was revealed in July, 2016 that the anti-secrecy site WikiLeaks was in possession of more than 19,000 emails hacked from the servers of the Democratic National Committee.

Witnesses testified that Mr. Trump’s campaign viewed Mr. Stone as an “access point” to WikiLeaks and tried to use him to get advance word about hacked emails damaging to Hillary Clinton.

Prosecutors argued that Mr. Stone had lied to Congress about his conversations about WikiLeaks with New York radio host and comedian Randy Credico.

During the 2016 campaign, Mr. Stone mentioned in interviews and public appearances that he was in contact with founder Julian Assange through a trusted intermediary and hinted at inside knowledge of WikiLeaks’ plans.

Testimony revealed that Mr. Stone, while appearing before the House intelligence committee, named Mr. Credico as his intermediary to Mr. Assange and pressured Mr. Credico not to contradict him.

After Mr. Credico was contacted by Congress, he reached out to Mr. Stone, who told him he should “stonewall it” and “plead the Fifth,” he testified. Mr. Credico also testified during Mr. Stone’s trial that Mr. Stone repeatedly told him to “do a ‘Frank Pentangeli,’" a reference to a character in The Godfather: Part II who lies before Congress.

Prosecutors also charged that Mr. Stone had threatened Mr. Credico’s therapy dog, Bianca, saying he was “going to take that dog away from you.” 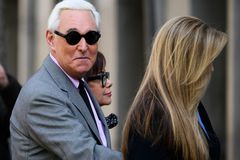 Trump calls for all cases stemming from Mueller probe to be ‘thrown out’
Subscriber content
February 18, 2020 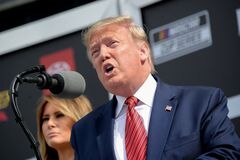 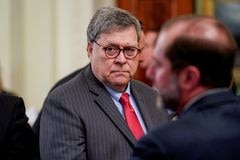