U.S. President Donald Trump defended his decision to kill Iran’s top general as a necessary measure to “stop a war” by preventing imminent attacks on Americans – even as the move stoked threats of revenge by Tehran and fears of escalation into a full-scale war between the two countries.

General Qassem Soleimani was killed in an air strike at Baghdad’s airport as a Senate trial looms for Mr. Trump over his alleged abuse of power, and an election year begins.

Speaking in Florida on Friday afternoon, Mr. Trump said he’d had Gen. Soleimani killed to stop unspecified “imminent and sinister attacks” on U.S. soldiers and diplomats that the general had been planning. But Mr. Trump said he did not want to take the fighting any further.

“We take comfort in knowing his reign of terror is over,” the President told reporters. “We took action last night to stop a war; we did not take action to start a war … we do not seek regime change.”

Gen. Soleimani was the 62-year-old head of the Quds Force, an Iranian military and intelligence unit responsible for foreign operations. The U.S. lists Quds as a terrorist organization, responsible for attacks on Americans in the Middle East.

Mr. Trump has taken a hawkish view of Iran, backing out of former president Barack Obama’s deal to stop Tehran’s nuclear program because Mr. Trump said it was not tough enough on Iran.

In contrast to the strike against Gen. Soleimani, the President has generally favoured a non-interventionist policy: Mr. Trump promised during his 2016 election campaign to pull the U.S. back from foreign wars, and previously declined to use military force on Iran when the country shot down a U.S. drone and attacked oil installations of American ally Saudi Arabia.

Who was Qassem Soleimani, and why was he an icon in Iran?

Iranian President Hassan Rouhani threatened that his country would “take revenge for this heinous crime.” The Associated Press reported that Iran’s Supreme National Security Council had made unspecified “appropriate decisions” on responding to the killing.

Carla Robbins, a national security expert at the Council on Foreign Relations think tank in Washington, said Mr. Soleimani’s high profile in Iran all but guarantees Tehran will hit back.

“This is not an act of deterrence, this is an act of extreme escalation,” she said of killing Gen. Soleimani. “It’s hugely reckless and dangerous. The likelihood of Iran backing down from this is unimaginable.”

Police in both New York and Los Angeles called on citizens to be vigilant. In New York, the city said officers would be deployed in larger numbers at key locations. Both cities said there was no specific threat.

The killing took place amid a standoff over Mr. Trump’s impending trial before the Senate for putting pressure on Ukraine to interfere in the 2020 election. The Democratic-controlled House of Representatives impeached Mr. Trump last month but has refused to send the articles of impeachment to the Republican-controlled Senate until GOP leaders agree to allow for witnesses at the trial.

Mr. Trump’s re-election race, meanwhile, is heating up with Democratic contenders facing their first nominating contest next month in Iowa.

Joe Biden, the top-polling candidate for the Democratic crown, said Mr. Trump “just tossed a stick of dynamite into a tinderbox” by killing Gen. Soleimani, and that the administration had no “discipline or long-term vision necessary” to handle the explosion.

House Speaker Nancy Pelosi said in a statement that Congress had not been consulted before the attack. “We cannot put the lives of American service members, diplomats and others further at risk by engaging in provocative and disproportionate actions,” she said.

But Republican Senator Lindsey Graham, an ally of Mr. Trump, said he was briefed on the attack ahead of time, when he visited the President’s resort at Mar-a-Lago, Fla., earlier this week. Mr. Graham argued the killing had dealt “a major blow to the Iranian regime.”

“You don’t have to support [Mr. Trump] withdrawing from the Iran Deal or his ‘maximum pressure’ campaign to support the proposition that planning, conducting, directing or funding attacks aimed at killing Americans merits a swift and decisive response,” he said, adding that “any other view is either a misinformed one or a lie.”

Barbara Perry, a presidential scholar at the University of Virginia, said Mr. Trump could benefit politically by getting Americans to “rally around the flag.” But it could all backfire if Iran retaliates and the situation spirals out of control.

“That could be the sort of cataclysm that siphons off votes from Trump,” said Prof. Perry, director of presidential studies at the Miller Center on the presidency. “There is not a majority of Americans at the moment who want him removed. If this turns really sour, that could happen." 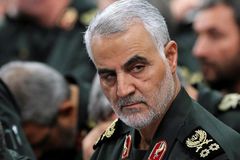 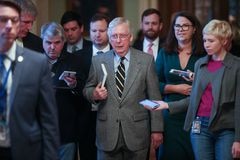 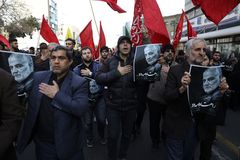