President Donald Trump used a White House conference Thursday to applaud far-right social media provocateurs even as he conceded that some of them are extreme in their views.

Trump, who has weaponized social media to eviscerate opponents and promote himself, led a “social media summit” of like-minded critics of Big Tech, excluding representatives from the very platforms he exploits.

The president used the event to air grievances over his treatment by Big Tech, but also to praise some of the most caustic voices on the right, who help energize Trump’s political base.

Trump singled out for praise James O’Keefe, the right-wing activist whose Project Veritas organization once tried to plant a false story in The Washington Post. In May 2010, O’Keefe and three others pleaded guilty in federal court to a misdemeanour in a scheme in which they posed as telephone repairmen in Sen. Mary Landrieu’s New Orleans district office.

Playing to the friendly crowd in the East Room, Trump was at ease, joking about everything from his spelling in tweets (blaming his thumbs, not his brain, for any mistakes) to his hair (saying the rainy weather at his July 4 outdoor speech at least proved his hair was real.)

“With amazing creativity and determination, you are bypassing the corrupt establishment, and it is corrupt,” Trump said. “And you’re bypassing the very, very corrupt media.”

In lengthy remarks, he said: “You’re challenging the media gatekeepers and corporate censors to bring the truth to the American people. ... You communicate directly with our citizens without going through the fake news filter.”

Earlier Thursday, Trump sent a stream of Twitter messages lashing out at social media companies and the press, familiar targets that resonate with his conservative base.

The meeting represented an escalation of Trump’s battle with companies like Facebook, Google and even his preferred communications outlet, Twitter, where he has an estimated 61 million followers. The president has claimed, without evidence, that the companies are “against me” and even suggested U.S. regulators should sue them on grounds of anti-conservative bias.

He announced Thursday that he is directing his administration to explore “all regulatory and legislative solutions to protect free speech and the free-speech rights of all Americans.”

And Trump said he is inviting executives from major social media platforms to join him at the White House over the next month or so.

The firms already are under closer scrutiny than ever by regulators and in Congress following a stream of scandals, including Facebook’s lapses opening the personal data of millions of users to Trump’s 2016 campaign. A bipartisan push for new data privacy legislation has emerged in Congress. Regulators at the Justice Department and the Federal Trade Commission are pursuing antitrust investigations of Facebook, Google, Apple and Amazon.

Trump unleased a volley of Twitter messages Thursday leading up to the conference. The targets were familiar — “certain companies,” the press and his Democratic rivals. The president predicted, without foundation, the demise of the press and the social media platforms if he loses to a Democrat in 2020.

After the conference, Trump published a series of tweets slamming Bitcoin and other types of digital currency — including Facebook’s recently announced Libra.

Among the other conservative organizations participating in the White House meeting were Turning Point USA, a non-profit; PragerU, short for Prager University, which puts out short videos with a conservative perspective on politics and economics; the Media Research Center; and the Heritage Foundation, a Washington think-tank .

Accusations commonly levelled by conservatives against the social media platforms include anti-religious bias, a tilt against abortion foes and censorship of conservative political views.

Trump has made it a priority to reach out to voters who oppose abortion. The anti-abortion groups Live Action and Susan B. Anthony List say Twitter has blocked their advertising. Twitter policy prohibits paid ads with content “that is inflammatory or provocative and is likely to evoke a strong negative reaction.”

Lila Rose, president of Live Action, said at the event that her group has been banned from advertising on Twitter while Planned Parenthood is allowed to do so. Pinterest also suspended the group from its platform, she said.

“This double standard and bias is a growing problem in big tech,” Rose said.

While some Silicon Valley company executives may lean liberal, they have asserted that their products are without political bias.

Representatives for Facebook, Google and Twitter have declined to comment specifically on the White House meeting. The Internet Association, the industry’s major trade group representing Facebook, Google and dozens of other companies, said online platforms “are the best tool for promoting voices from all political perspectives in history.”

“Internet companies are not biased against any political ideology, and conservative voices in particular have used social media to great effect,” the group’s president Michael Beckerman said in a statement Thursday.

Facebook has banned extremist figures such as Alex Jones of Infowars and Louis Farrakhan of the Nation of Islam. Twitter has banned hate speech on the basis of someone’s race, gender and other categories. Twitter broadened its policy this week to include banning language that dehumanizes others based on religion, and the company said it may also ban similar language aimed at other groups, such as those defined by gender, race and sexual orientation.

“I’ve never seen evidence of tech firm bias against conservatives,” said Rep. David Cicilline, D-R.I., who has been sharply critical of the big companies because of their market dominance and effect on competition. He leads a House Judiciary subcommittee that has opened a bipartisan probe into the tech giants’ market conduct.

“If someone wants to show me some empirical data, instead of some alt-right member’s paranoid claims, I’d appreciate it,” Cicilline said in a statement Wednesday. 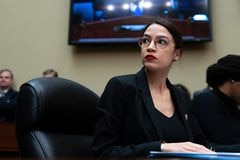 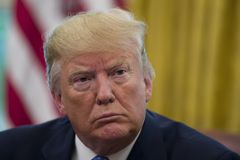 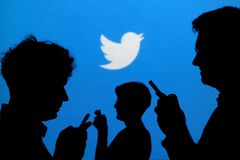