Donald Trump is on a collision course with Congress over his administration’s refusal to co-operate with an impeachment inquiry into the U.S. President’s efforts to solicit foreign interference in next year’s election.

The legislator leading the probe, Adam Schiff, warned Wednesday that the investigation would expand to include allegations of obstruction of justice if Mr. Trump failed to turn over key documents and allow government witnesses to testify.

At a pair of raucous public appearances, the President lashed out in all directions. He called for Mr. Schiff to be investigated for “treason,” labelled the whistle-blower whose complaint sparked the impeachment probe a “spy” and called one of his potential rivals for the presidency “stone-cold crooked.”

Mr. Schiff, the Democratic chairman of the House intelligence committee, said Wednesday that he would subpoena White House documents related to the July 25 telephone call between Mr. Trump and Ukrainian President Volodymyr Zelensky. Failure to turn over the information, Mr. Schiff said, would constitute obstruction – one possible ground for impeachment. Congress is already investigating Mr. Trump for possible abuse of power over his discussion with Mr. Zelensky.

Secretary of State Mike Pompeo, who confirmed Wednesday that he was also on the call, refused earlier this week to allow five State Department officials to testify as part of the investigation.

“We want to make it abundantly clear that any effort by the Secretary, by the President or anyone else to interfere with the Congress’s ability to call before it relevant witnesses will be considered as evidence of obstruction of the lawful functions of Congress,” Mr. Schiff said at a Capitol Hill press conference with House Speaker Nancy Pelosi.

According to a rough transcript of Mr. Trump’s call with Mr. Zelensky, Mr. Trump asked his Ukrainian counterpart to investigate Joe Biden, one of the leading contenders for the 2020 Democratic presidential nomination, over his son Hunter Biden’s business dealings in Ukraine.

At an Oval Office meeting with Finnish President Sauli Niinisto, Mr. Trump accused the whistle-blower – who first tried to alert Congress to the contents of the telephone call – of espionage. And he took aim at Mr. Schiff for delivering a paraphrase of the call at a committee meeting the previous week, claiming that such an action constituted “treason.”

At a wild joint press conference with Mr. Niinisto later in the day, Mr. Trump grew increasingly testy as he faced questions about the burgeoning scandal.

When pressed on what exactly he had wanted the Ukrainian government to do with Mr. Biden, Mr. Trump refused to answer and berated the reporter who asked.

The hashtag #TrumpMeltdown was the top trending item on U.S. Twitter after the presidential outburst.

Mr. Trump subsequently used a Nickelback meme to attack the former vice-president. The President tweeted the opening of the video for Photograph, a 2005 hit by the Canadian rockers, with a photoshopped-in picture of Mr. Biden, Hunter Biden and Devon Archer, one of the younger Mr. Biden’s business associates who was also involved in Ukraine. “LOOK AT THIS PHOTOGRAPH!” Mr. Trump wrote.

Twitter subsequently disabled the video and replaced it with a message saying that the copyright owner had complained. It was not immediately clear whether the complaint had come from the band, its record label or the owner of the photo of the Bidens.

At a campaign stop in Las Vegas, Mr. Biden pointed to the lack of evidence that he did anything wrong, and accused Mr. Trump of trying to change the channel from his soliciting foreign election interference.

“There is zero, zero, zero, zero evidence of any assertion being made,” Mr. Biden said. “Look, the issue is this President of the United States engaged in activity which, at minimum, gives a lot of running room for the Russians in Ukraine.”

Mr. Trump’s clash with Congress could set up a legal battle if the Democrats seek a court order to force the President to hand over evidence for their inquiry. Exactly how such a case would turn out is unclear: Presidents have previously claimed executive privilege to keep some White House discussions private, but it is unusual for an administration to refuse to co-operate with an investigation on such a large scale.

“We are in uncharted waters on how the courts will look at this sort of wholesale stonewalling,” said Paul Schiff Berman, a law professor at George Washington University. 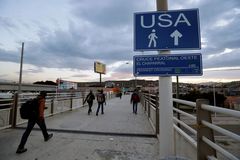 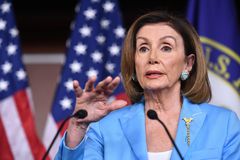 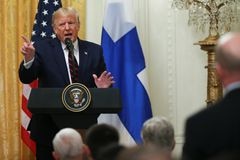 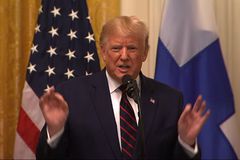