U.S. President Donald Trump insulted NBA star LeBron James from afar but passed up an opportunity to criticize him on his own turf, sticking to Democrats, the news media and other familiar targets during a campaign rally on Saturday night in Mr. James’ home state of Ohio.

When Mr. Trump took the stage in a sweltering high school gymnasium north of Columbus, his late-night tweet deriding Mr. James’ intellect had already generated hours of online buzz in defence of the all-star from Akron who had just opened a school for at-risk children in his hometown.

Even first lady Melania Trump provided an assist to Mr. James, her spokeswoman saying it appeared to the president’s wife that Mr. James was “working to do good things on behalf of our next generation” and that Ms. Trump would be open to visiting his “I Promise” school. The statement didn’t criticize Mr. Trump.

CNN’s Don Lemon spoke to Mr. James at the school and the interview included a negative assessment of the president, whom Mr. James said has “kind of used sports to kind of divide us.”

Just before midnight on Friday, Mr. Trump tweeted: “Lebron James was just interviewed by the dumbest man on television, Don Lemon. He made Lebron look smart, which isn’t easy to do. I like Mike!”

Among the current and former professional athletes jumping to Mr. James’ support in support of Mr. James on Saturday was “Mike,” also known as NBA legend Michael Jordan, who said in a statement: “I support LeBron James. He’s doing an amazing job for his community.”

Mr. James’ publicist declined to respond to Mr. Trump’s tweet, but early on Saturday afternoon, James retweeted a post from the “I Promise” school and said: “Let’s get it kids!! Love you guys.”

Mr. Trump rarely allows a slight to pass unanswered, but Mr. James appeared off-limits by the time the president crossed the Ohio border to campaign for state Senator Troy Balderson, the Republican in a special U.S. House election on Tuesday. His opponent, Democrat Danny O’Connor, tweeted, “I don’t have to tell (asterisk) anyone (asterisk) what LeBron James means to Ohio.”

In remarks lasting more than an hour, Mr. Trump assailed many other critics while arguing that Republicans needed to control Congress and casting the midterms as a referendum on himself.

He defiantly questioned the idea that, historically, the party that controls the White House suffers in the midterms, declaring “but I say why?”

“Why would there be a blue wave? I think it could be a red wave,” Mr. Trump said of his party’s prospects in November. “They want to take away what we’ve given. And we’re doing a lot of things people don’t even know about.”

He blasted the media as “fake news,” saying journalists “were terrible people,” and went on a screed against illegal immigration. The crowd cheered and chanted the campaign staple rallying cry, “Build the wall, build the wall.”

Mr. Trump touted Mr. Balderson’s record on crime and immigration and claimed that Mr. O’Connor, if he won, would be a “puppet” of Nancy Pelosi, who stands to reclaim the title of speaker of the House if Democrats seize control of the body this fall.

He also gave an onstage hug to representative Jim Jordan, who is under siege after allegations that, as an assistant wrestling coach at Ohio State University, he knew of alleged sexual abuse by a team doctor but did not report it. Mr. Jordan, who has denied the charge, has announced his plan to run for speaker of the House.

“Jim Jordan, how great is he?” Mr. Trump said. “What a great defender he’s been, what courage. He’s a brave, tough cookie.”

Mr. Trump brought up another regular target of scorn, calling U.S. representative Maxine Waters, a California Democrat who has lashed out at the president, “an extremely low IQ person.” In calling three prominent African-Americans all but stupid, Mr. Trump once again left himself open to accusations of racism.

Mr. Trump also blamed the news media for incorrectly reporting that he was backing representative Steve Stivers in the special election – even though Mr. Trump himself in recent days had inadvertently tweeted his support for Mr. Stivers, who is in a different race, before correcting himself.

He defended his trade policies and, at one point, seemed to suggest that the markets would be up another 40 per cent without his tariffs – but said the measures were needed or the nation would eventually have to “pay the piper.”

The Ohio rally was Mr. Trump’s third of the week and he has pledged to accelerate his pace further as the midterms approach. He travelled to the Columbus area from his golf course in Bedminster, N.J., where he is in the early stages of an 11-day vacation. 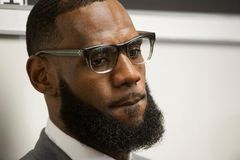 ‘Those kids are our future’: LeBron James opens public school in his hometown Subscriber content
July 31, 2018 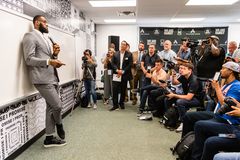