In a telephone call on May 25, Prime Minister Justin Trudeau asked U.S. President Donald Trump how he could possibly consider Canada a threat to America’s national security – the ostensible reason for looming tariffs on Canadian steel and aluminum.

“Didn’t you guys burn down the White House?” Mr. Trump replied, in reference to the capture of Washington during the War of 1812.

The President’s glib response, first reported by CNN and confirmed by The Globe and Mail, was emblematic of Mr. Trump’s new attitude toward his northern neighbour, whom he is treating as his No. 1 enemy amid an escalating trade war and growing rhetorical battle with Mr. Trudeau.

Since hitting 30 countries with metals tariffs last week, Mr. Trump has bashed Canada far more than his usual adversaries in Mexico, China or the European Union.

Opinion: As trade war escalates, era of the Trump whisperer comes to an end

When Mr. Trudeau announced retaliatory levies on a slew of U.S. goods – from orange juice to pickles – and accused the Trump administration of ignoring “logic and common sense” on trade, Mr. Trump called out the Prime Minister by name in a statement that threatened to tear up the North American free-trade agreement. In a tweet the next morning, he mused about shutting Canadian wood products out of America.

And after the Prime Minister took to U.S. television to describe Mr. Trump as “unpredictable” and his tariffs “insulting and unacceptable,” the President lashed out again online, tweeting that “Canada has all sorts of trade barriers on our Agricultural products. Not acceptable!”

Mr. Trump was notably more muted in his treatment of Mexico and the EU, even as they announced similar retaliations.

Things stand to get worse: While Mr. Trudeau is hoping a meeting with Mr. Trump at the G7 summit in Quebec later this week will calm the waters, the President is mulling further tariffs, including a 25-per-cent levy on Canadian-made cars and trucks.

The fight has pushed relations between Canada and its closest commercial and diplomatic partner to their tensest time in recent memory, with $900-billion of annual trade in the balance.

At least part of Mr. Trump’s ire toward Canada appears to come from dashed expectations, observers said. For more than a year, Mr. Trudeau publicly avoided any public criticism of the President, making his tough tariff response a surprise.

“Trump thought Canada was going to be the easiest country to play, and he’s disappointed that didn’t happen,” said Dunniella Kaufman, a Canadian trade lawyer based in Washington.

Sources with knowledge of the Trump administration’s thinking say the President’s annoyance with Ottawa has actually been building for nearly a year: When the Trump administration started NAFTA renegotiations last summer, it expected Canada to gang up on Mexico and help force it to give up auto jobs that had been lured south. When Canada instead formed a common front with Mexico against Mr. Trump’s protectionist demands, the United States was upset, the sources said.

At a White House meeting in February, Mr. Trump complained that Canada was “very smooth” at taking the U.S.’s money in unfair trade deals. On other occasions, he has accused the country of being “very rough” as it has “taken advantage” of the United States and “outsmarted our politicians for many years.”

Christopher Sands, director of the Center for Canadian Studies at Johns Hopkins University, said Mr. Trump was particularly rankled by Ottawa’s NAFTA outreach campaign, during which Canadian politicians and businesspeople fanned out across the country to encourage their American counterparts to lobby the White House to preserve NAFTA.

“I think it started bugging him,” he said.

Matthew Rooney, a former U.S. state department official in charge of the Canada file during the Obama administration, said there have been difficult times in the past. When then-prime minister Stephen Harper in 2011 said U.S. approval of the Keystone XL pipeline – which then-president Barack Obama was refusing to do – was a “no-brainer,” the White House considered the remark beyond the pale.

But tensions with the current President are on a different level.

“There have always been little tiffs that are part of doing business. But this is a little unusual and unusually personal,” he said. “If President Trump actually referenced the War of 1812, that is frankly absurd.”

The reference itself is not entirely historically accurate. While the war was largely fought over control of Canada, which was then a British colony, the August, 1814, attack on Washington itself was carried out by British regulars and marines rather than colonial militia. The raid, made in revenge for the American burning of York – present-day Toronto – the previous year, saw the British briefly capture and set fire to the U.S. capital.

“The United States and Canada will remain firm friends and allies, whatever short-term disagreements may occur,” Mr. Kudlow said. “So I would say relations are very good.”

And Laura Dawson, director of the Canada Institute at the Wilson Center think tank in Washington, said that – despite the current drama – ties between the two countries on everything from commerce to the Stanley Cup final are strong enough to weather the storm.

“It’s important to differentiate between relations between leaders, and relations between communities, government organizations, businesses and citizens,” she wrote in an e-mail. “Six Canadians on the Caps roster and eight on Vegas. We’re still good.” 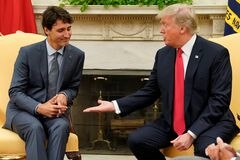 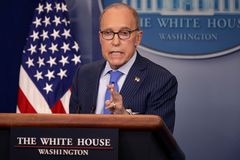 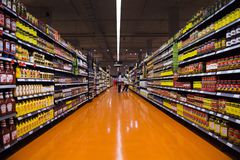