U.S. President Donald Trump claimed Monday he has an “absolute right” to pardon himself, part of an extraordinarily expansive vision of executive authority that is mostly untested in court and could portend a drawn-out fight with the prosecutors now investigating him.

No need of a pardon anyway, Trump tweeted, because “I have done nothing wrong.” In fact, his lawyers assert in a memo to special counsel Robert Mueller, it’s impossible for him to have done anything wrong in the area of obstructing justice, an issue Mueller has been investigating. That’s because, as the country’s chief law enforcement officer, Trump himself has ultimate control of the Justice Department and executive branch.

Beyond that, his lawyers have repeatedly insisted that it’s beyond dispute that a sitting president cannot be criminally prosecuted.

Trump also tweeted Monday that the Justice Department’s “appointment of the Special Counsel is totally UNCONSTITUTIONAL.”

Mueller’s investigation moves forward nonetheless, and as it does courts may have to confront questions with minimal if any historical precedent. Those include whether a president can be forced to answer questions from prosecutors, whether it’s possible for a commander in chief to criminally interfere in investigations and whether a president’s broad pardon power can be deployed for corrupt purposes.

“There’s a reason they’re untested. It’s because they were unthinkable,” said Savannah Law School professor Andrew Wright, who served in the White House counsel’s office under President Barack Obama. “The president’s game here in part is to take issues that are so beyond the pale that they have never been tested and say, ‘Look, there’s no authority here on point.“’

Mueller is investigating whether Trump associates co-ordinated with Russia during the 2016 presidential election and whether Trump took steps to shut down that investigation through actions including the firing of FBI Director James Comey.

Though Trump insists he did nothing wrong, the statements from him and his lawyers, including the just-disclosed January memo to Mueller, make clear that much of their defence revolves around establishing that he was constitutionally empowered to take the actions he took.

The defence argument suggests that protocols meant to protect against abuses of power are merely norms the American public has come to expect, rather than laws binding on a president.

In Trump’s view, for instance, he is entitled to fire an FBI director – Comey or any other – for any reason. He can similarly terminate an FBI investigation given the constitutional powers he enjoys, the president’s lawyers say. That argument may help ward off allegations from Comey that the president asked him to consider shutting down an FBI investigation into former White House national security adviser Michael Flynn.

There is logic to the argument that Trump couldn’t have obstructed justice by firing Comey, even if the questions haven’t been fully resolved, said Josh Blackman, a professor at South Texas College of Law.

“If you’re trying to apply the obstruction statutes to something the president has the power to do, then I don’t think the statute applies,” he added.

White House spokeswoman Sarah Huckabee Sanders, who was questioned repeatedly Monday about whether the president is above the law, said no, he is not.

But Blackman said that was overly simplistic, that the better question is how the law applies to the president.

“It’s a great slogan, but the law doesn’t treat the president equal in all respects,” Blackman said. “There are certain things the president can do that no one else can do,” such as granting pardons and negotiating international treaties.

There’s some historical precedent for a court clash that could be instigated by the Trump investigation, but in many ways the arguments remain unsettled.

The Supreme Court, for instance, has never definitively ruled on the question of whether a president can be forced to testify, though the justices in 1974 did rule that Richard Nixon had to produce recordings and documents that had been subpoenaed.

Bill Clinton was subpoenaed in 1998 to appear before the Whitewater grand jury, though that subpoena was withdrawn after Clinton struck a deal to give testimony. The agreement headed off a potential challenge to the subpoena on constitutional grounds.

In a 1997 ruling allowing Paula Jones’ sexual harassment lawsuit against Clinton to go forward, Justice John Paul Stevens wrote: “We have made clear that in a criminal case the powerful interest in the ‘fair administration of criminal justice’ requires that the evidence be given under appropriate circumstances lest the ‘very integrity of the judicial system’ be eroded.”

He also said that presidents have given testimony and produced documents often enough that “such interactions … can scarcely be thought a novelty.”

Though Mueller has raised the prospect of subpoenaing Trump if he rejects a voluntary interview, it’s not clear he’ll actually do so. Such a move could theoretically end in a court defeat for Mueller, and would almost certainly prolong the investigation.

The past several days have also spurred arguments about the scope of the president’s pardon power.

Trump has already proved willing to break from protocol through granting pardons outside the Justice Department’s pardon attorney, which historically reviews clemency petitions and makes recommendations on worthy candidates.

On his own, he has recently pardoned conservative Barack Obama critic Dinesh D’Souza, who had pleaded guilty to campaign finance fraud, and former Bush administration White House aide I. Lewis “Scooter” Libby. And Trump said he was contemplating clemency for Martha Stewart and former Illinois Gov. Rod Blagojevich, among “lots” of other people.

A 1974 opinion from the Justice Department’s Office of Legal Opinion maintains that presidents cannot pardon themselves “under the fundamental rule that no one may be a judge in his own case,” though that question has never been tested before the country’s highest court. The opinion does say that if a president were to declare himself temporarily unable to remain in office, the vice-president could take over as acting president and pardon the president.

In the end, the Mueller investigation raises significant questions about how to balance a president’s right to manage the executive branch as he believes with the public interest that he be subject to the law.

“Their argument has antecedents that are legitimate about the president’s management of the executive branch,” said Wright, who also served as a lawyer for former Vice-President Al Gore. “But they’re taking them well past their logical extremes.” 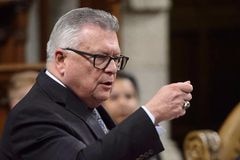 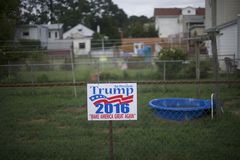 Trump says he didn’t fire Comey over Russia investigation
May 31, 2018 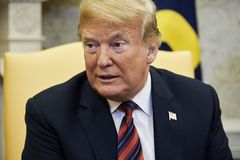