U.S. President Donald Trump on Tuesday pledged to take a hard line on anyone destroying or vandalizing U.S. historical monuments and threatened to use force on some protesters, as political activism against racial injustice sweeps the country and threatens his re-election chances.

“They’re not taking down our monuments,” Trump told reporters at the White House. “I will have an executive order very shortly and all it’s going to really do is reinforce what’s already there, but in a more uniform way.”

Trump also on Tuesday announced via Twitter an authorization “effective immediately” to arrest anyone caught hurting a commemoration to an armed services member on federal land, even though the government already had that power under the 2003 Veterans Memorial Act.

Many statues and monuments targeted by crowds in recent weeks pay homage to the rebel Confederacy from the nation’s Civil War and are seen as tributes to those who perpetuated slavery. The calls for their removal, along with massive Black Lives Matter protests earlier this month and local governments reforming police forces, were sparked by the May 25 death of George Floyd, a Black man killed in police custody.

Trump has been out of step with most of the country, blasting the protests even though a majority of Americans sympathize with them. At his Saturday rally in Oklahoma he said an “unhinged left-wing mob” wants to “desecrate” what he described as “beautiful monuments.”

Mixed with his rocky response to the coronavirus that has killed more than 120,000 Americans, the disconnect has put Trump behind former Vice President Joe Biden, his presumptive challenger in the Nov. 3 election, in opinion polls.

Late on Monday protesters tried to topple a statue of former President Andrew Jackson facing the White House, scrawling “killer scum” on the base and pulling at ropes around the figure of Jackson on a horse. Police in riot gear drove the crowd back and formed a protective ring around the statue.

Trump told reporters “numerous people” were in jail for the attempt and the government is “looking at long-term sentences.”

Jackson, a one-time Army general, enslaved Black people as a plantation owner and is remembered for the Trail of Tears, a forced removal of Native Americans from the South that killed thousands.

Trump also wrote on Twitter he was ready to use force on protesters. Earlier in the month he called in the National Guard and federal law enforcement to crack down on demonstrations near the White House, including using pepper spray and “flash bang” stun grenades to disperse peaceful protesters in front of St. John’s Episcopal Church.

“There will never be an ‘Autonomous Zone’ in Washington, D.C., as long as I’m your President,” Trump tweeted. “If they try they will be met with serious force!”

Twitter placed a warning notice on the tweet, the second time it has used the label since it began challenging Trump’s tweets in May.

Twitter said it hid Trump’s tweet behind its “public interest” notice because it included a threat of harm against an identifiable group. The label restricts distribution of tweets by public officials which violate Twitter’s rules, while leaving them online to allow for scrutiny.

A Twitter spokeswoman said teams within the company’s safety division informed Chief Executive Jack Dorsey of the decision before applying the notice.

Facebook, which has taken a more hands-off approach to speech by political leaders, left the same post untouched.

The warning escalated Twitter’s challenge to Trump, who has used the platform unimpeded for years to rally supporters and deride opponents.

Opinion
Trump’s vitriol against the Democrats comes with a warning
Subscriber content
June 21, 2020 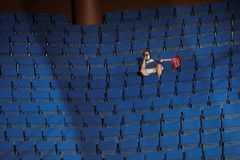 Under the pressure of protest, Washington’s Lafayette Square undergoes a transformation
June 23, 2020 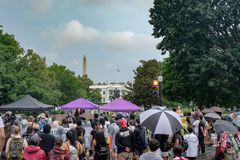