The fate of final debates between U.S. President Donald Trump and Democrat Joe Biden was thrown into uncertainty Thursday as the campaigns offered duelling proposals for moving forward with faceoffs that have been upended by the President’s coronavirus infection.

By late in the day, it was unclear when or how the next debates would proceed, or whether voters would even get to see the two men running for the White House on the same stage again before Election Day.

The whipsaw day began with an announcement from the non-partisan Commission on Presidential Debates, which said the next debate, a town hall-style affair set for Oct. 15 in Miami, would be held virtually. The commission cited health concerns following Mr. Trump’s infection as the reason for the change.

Mr. Trump, who is eager to return to the campaign trail despite uncertainty about his health, said he wouldn’t participate if the debate wasn’t in person. Mr. Biden’s campaign then suggested the event be delayed a week until Oct. 22, which is when the third and final debate is already scheduled.

Next, Mr. Trump countered again, agreeing to a debate on Oct. 22 – but only if face to face – and asking that a third contest be added on Oct. 29, just before the election. But Mr. Biden’s advisers rejected squaring off that late in the campaign.

ABC News, which had been set to host next week’s debate, subsequently announced it would host its own town hall where Mr. Biden will answer questions from voters on national television next Thursday – but in Philadelphia, not Miami.

The debate commission, which has the unenviable task of finding common ground between the competing campaigns, did not weigh in on any of the new proposals. The organization has come under scrutiny already during this election after the first debate between Mr. Trump and Mr. Biden deteriorated, with the President frequently interrupting his opponent and the moderator unable to take control.

For Mr. Trump, who is recovering from COVID-19 at the White House after spending three days in the hospital, all the talk of contagiousness is an unwelcome disruption to his effort to shift focus away from a virus that has killed more than 210,000 Americans this year.

In an interview with Fox Business anchor Maria Bartiromo shortly after the commission’s announcement, Mr. Trump insisted he was in “great shape” and called the idea of a virtual debate a “joke.”

“I’m not going to do a virtual debate,” he declared.

The President’s campaign manager, Bill Stepien, said Mr. Trump would stage a rally rather than debate next Thursday, though it’s not yet clear if he will be well enough to do that.

With less than four weeks until Election Day and with millions of voters casting early ballots, pressure is building on Mr. Trump to turn around a campaign that is trailing Mr. Biden nationally and in most battlegrounds, where the margin is narrower. A debate before an audience of tens of millions of television viewers could provide that reset.

Mr. Trump’s apparent unwillingness to change his style to win back voters he needs – particularly women – was on display again Thursday during his Fox Business interview when he referred to Democratic vice-presidential nominee Kamala Harris as a “monster.” Ms. Harris and Vice-President Mike Pence debated in person in Salt Lake City on Wednesday night, but were separated by Plexiglas barriers to prevent the spread of the virus.

Campaigning with Ms. Harris in Arizona, Mr. Biden called Mr. Trump’s characterization “despicable” and added that it was “so beneath the office of the presidency.”

This would not be the first time Mr. Trump has skipped a debate. During the 2016 Republican primary, he boycotted the last debate before Iowa’s first-in-the nation’s caucuses, holding a fundraiser for veterans instead – a move he later speculated may have contributed to his loss in the state.

It still wasn’t entirely clear he’d not show up this time, though. Mr. Biden acknowledged as much before flying to Arizona, saying, “We don’t know what the President’s going to do. He changes his mind every second.”

Mr. Biden said earlier in the week that he was “looking forward to being able to debate” but added that he and Mr. Trump “shouldn’t have a debate” as long as the President remains COVID-19 positive.

Mr. Trump fell ill with the virus on Oct. 1, just 48 hours after sharing a stage with Mr. Biden in person during the first presidential debate in Cleveland. While the two candidates remained a dozen feet apart, Mr. Trump’s infection sparked health concerns for Mr. Biden and sent him to undergo multiple COVID-19 tests before returning to the campaign trail. His campaign announced Thursday that Mr. Biden had undergone his fifth such test and was found to be negative.

Mr. Trump was still contagious with the virus when he was discharged from Walter Reed National Military Medical Center on Monday, but his doctors have not provided any detailed update on his status. According to the Centers for Disease Control and Prevention, those with mild to moderate symptoms of COVID-19 can be contagious for as many as – and should isolate for at least – 10 days. 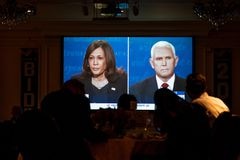 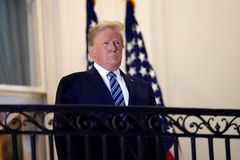 Declaring himself ready for rallies, Trump claims he is no longer contagious
October 14, 2020 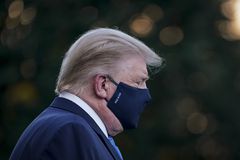