President Donald Trump says he will freeze U.S. funding to the World Health Organization, blaming the international body for “mismanaging” the response to the coronavirus pandemic as he faces mounting criticism of his own slow response to the outbreak.

Mr. Trump announced Tuesday that he would withhold between US$400-million and US$500-million worth of payments, in the middle of a health crisis, as he accused the WHO of being too close to China.

The United States is already US$99-million in arrears on its dues, according to a WHO report from last month, owing US$57.8-million for this year and US$41.2-million from previous years. Eighty other countries, including Canada, have paid in full.

The move is the latest attack by the President on an international institution. It is also Mr. Trump’s most serious effort to shift blame for the U.S.’s handling of the pandemic – he has previously accused state governors, the Obama administration and congressional Democrats of failing to do enough to stop the virus.

But it also casts a spotlight on the WHO’s relationship with China, which it has praised despite initial Chinese attempts to hide the epidemic and evidence Beijing has under-reported death totals.

He did not indicate what would happen after the review was complete.

The President said the WHO “put political correctness above life-saving measures” in opposing his ban on travel from China. He said the organization caused “delays” in “declaring a public health emergency” because it was helping China hide information on the outbreak’s severity.

“It would have been so easy to be truthful, and so much death has been caused by their mistakes,” Mr. Trump said.

The WHO declared the coronavirus a public health emergency of international concern on Jan. 30. Mr. Trump did not declare a national health emergency until March 13, after weeks of dismissing concerns about COVID-19 as a “hoax” and falsely insisting case numbers were falling. The U.S. now has the most deaths and confirmed cases of any country in the world.

The President has faced criticism amid revelations that members of his administration warned him of the severity of the epidemic as far back as January. Mr. Trump also initially praised China’s handling of the pandemic, saying in February that the country was “working very, very hard” and getting the virus “more and more under control.”

Mr. Trump’s announcement Tuesday caused alarm that he would make it harder for other countries to deal with coronavirus by cutting off resources at a pivotal moment.

“During the worst public health crisis in a century, halting funding to the World Health Organization is a dangerous step in the wrong direction that will not make defeating COVID-19 easier,” Patrice Harris, president of the American Medical Association, said in a statement. “Fighting a global pandemic requires international co-operation and reliance on science and data.”

The WHO has taken heat for lauding China’s “transparency” and handling of COVID-19, despite efforts by Chinese authorities to cover it up. For instance, Li Wenliang, a Wuhan doctor who tried to sound the alarm about the outbreak, faced a police interrogation before dying of the disease himself.

U.S. intelligence, in a confidential report to the White House, concluded that China has lied about the number of people who died of the virus, Bloomberg News reported earlier this month.

The WHO’s leader, however, has argued that his organization is above disputes over countries’ handling of the pandemic.

“If you don’t want any more body bags, then you refrain from politicizing it,” director-general Tedros Adhanom Ghebreyesus said in Geneva last week. “If you don’t believe in unity, please prepare for the worst to come.”

The WHO is funded by member states. The U.S., which accounts for roughly 10 per cent of its US$6-billion annual budget, is the largest contributor.

The President has long built his political brand on criticizing international co-operation and organizations. He has, for example, repeatedly accused the World Trade Organization of helping China cheat the U.S. on trade.

Editor’s note: An earlier version of this article said China is the second-largest contributor to the WHO. This was based on the WHO’s mandatory contributions, not the full budget. 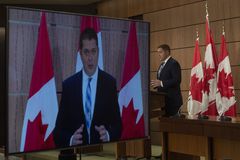 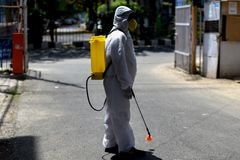 WHO warns about dangers of premature lifting of COVID-19 restrictions
April 10, 2020 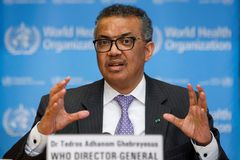