U.S. President Donald Trump is planning to declare a national emergency to build his promised wall on the Mexican border, circumventing Congress and again testing the constitutional limits of his executive power.

The move will allow Mr. Trump to avoid another government shutdown this week without backing down on his foundational campaign pledge, but is likely to set off a contentious court battle.

Mr. Trump has been demanding US$5.7-billion for the wall from Congress since December as part of a larger government spending bill. Legislators this week reached a compromise that would provide only US$1.375-billion. The bill must be signed into law by Friday to keep the government from running out of funds and suspending some operations.

On Thursday afternoon, Senate Majority Leader Mitch McConnell burst onto the floor of the chamber and interrupted debate to announce that Mr. Trump would approve the legislation – and simultaneously issue an emergency declaration to get the rest of the money.

Both the Senate and House passed the bill, sending it to Mr. Trump. The President scheduled an event to address “the crisis on our southern border” for 10 a.m. ET Friday in the White House Rose Garden.

Nancy Pelosi, the Democratic Speaker of the House of Representatives accused Mr. Trump of “making an end-run around Congress” and said launching a court challenge was “an option” she is reviewing.

“It’s not an emergency what’s happening at the border,” she told reporters on Capitol Hill. “It’s a humanitarian challenge.”

Mr. Trump’s declaration will be governed by the National Emergencies Act. Once he proclaims an emergency at the border, he will have the ability to invoke more than 100 specific special powers to deal with it, including provisions that allow him to divert funds from the Defense Department’s budget to fund special military construction.

A court challenge would turn on the premise that Mr. Trump is abusing his authority by using the act for something it was not intended for. Previous emergency declarations have involved specific threats from hostile powers: the 1979 hostage-taking of Americans following the Iranian Revolution, for instance, or the terrorist attacks of Sept. 11, 2001.

But the law is open-ended enough that it could be a difficult case for a court to decide.

“There’s nothing in the act itself that really defines what an emergency is. The constraints on using it are more norms than anything within the law,” said Julie Novkov, a political scientist and constitutional law expert with the State University of New York at Albany.

Prof. Novkov said it’s most likely that a challenge would therefore look at the specific ways in which Mr. Trump uses his authority to get the wall built – classifying the wall as military construction, for instance – and whether these violate the constitutional separation of powers between the President and Congress.

Elizabeth Goitein of the Brennan Center for Justice at New York University contends that the purpose of emergency powers is to allow the President to address situations that require a faster response than Congress can muster. But in the case of the Mexican border, Congress has considered the situation and expressly opted not to take the action Mr. Trump wants.

“When the President invents an emergency in order to fund a project that Congress has very explicitly declined to fund, that’s an effort to undermine the constitutional allocation of powers,” she said in a question-and-answer on the Brennan Center’s website.

Mr. Trump has faced other court challenges to the constitutionality of his actions. Most notably, his attempts to ban people from some Muslim-majority countries from travelling to the U.S. were repeatedly struck down by judges. Ultimately, the Supreme Court ruled that a limited version of the ban was constitutional.

Mr. Trump promised during the campaign to build a wall along 1,600 to 3,200 kilometres of the border and have Mexico pay for it. But Mexico has adamantly refused to hand over any money and Congress has provided enough funding for less than 300 kilometres of wall.

Congress has the ability, under the act, to overrule a presidential declaration. But this would require a two-thirds majority and congressional Republicans have consistently shied away from any action that concretely challenges Mr. Trump.

Still, some GOP senators said they were deeply uneasy with the President’s decision – not least because they feared it would set a precedent for a future Democratic president to unilaterally impose policies Republicans dislike, such as cuts to carbon emissions.

“No crisis justifies violating the Constitution,” said Florida Senator Marco Rubio. “Today’s national emergency is border security. But a future president may use this exact same tactic to impose the Green New Deal.” 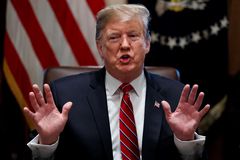 Analysis
Lack of Republican support for Trump’s border wall is what doomed the president’s plans
February 12, 2019 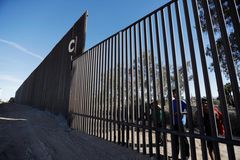 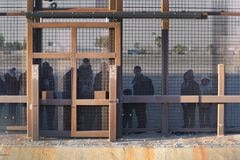