For Canadians, following the legal saga of U.S. President Donald Trump’s travel bans has been a confusing and circuitous journey. In Washington, D.C., Mr. Trump signed one executive order after another; in Washington state, Hawaii and Maryland, judges struck them down; and then attention turned back to Washington in hopes that the Supreme Court would sort it out.

That cycle repeated three times before the Supreme Court delivered its final word on the matter: On June 26, it ruled 5-4 in favour of the ban, upholding the Trump administration’s right to bar visitors from seven countries. The final ban affects travellers in more varied and specific ways than Mr. Trump’s previous two travel bans. But now that the latest ban has been upheld, Mr. Trump could be emboldened to add more countries to the list.

Here’s a recap of how we got to this point, and a primer on the U.S. court system.

The United States has a more decentralized legal system than Canada’s. All 50 states have their own criminal and state laws, with a separate court system running parallel to that for federal laws. While several state governments objected to Mr. Trump’s executive orders – which temporarily suspended immigration and refugee claims from a list of Muslim-majority countries – immigration and foreign policy are federal matters, so the ban was fought in federal courts. 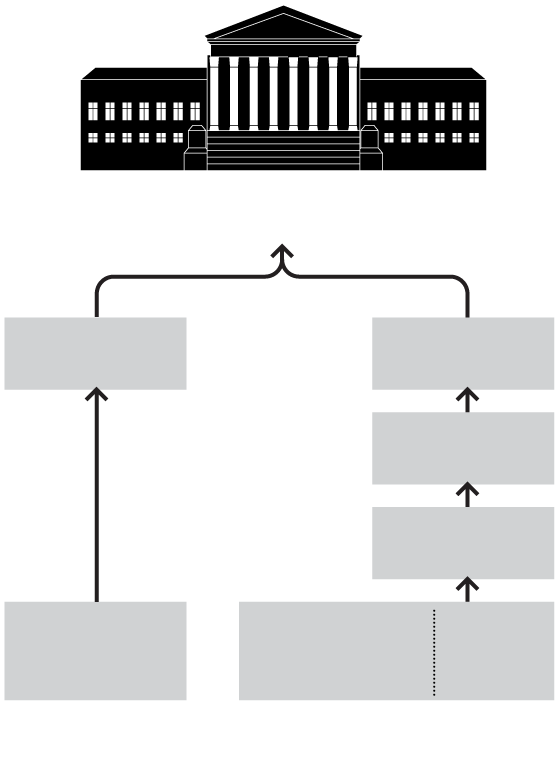 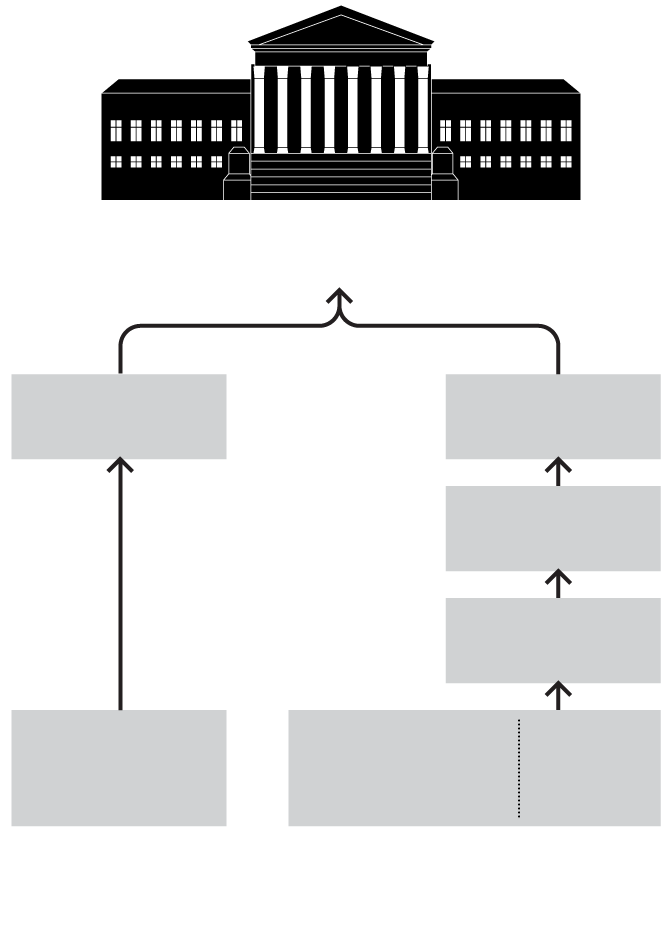 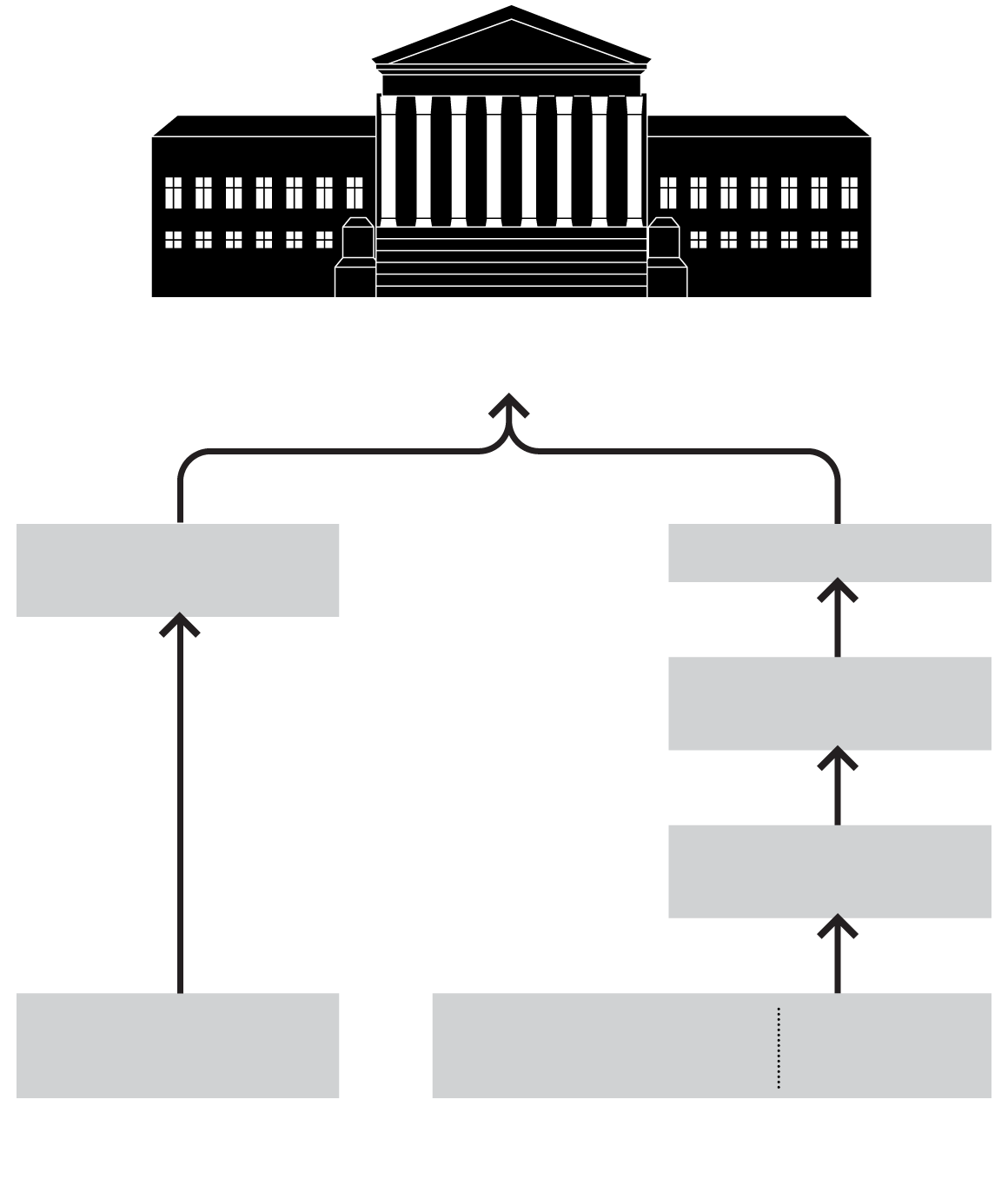 At the base of the federal system are 94 district courts. Each state and U.S. territory has at least one district court, but some states have as many as four. Any of the district judges can weigh whether federal laws and presidential orders are constitutional, as Justice James Robart – the judge for the western district of Washington State – was asked to do with Mr. Trump’s order from Jan. 27, 2017. Hawaii’s Justice Derrick Watson weighed in against two of the orders, from March 6 and Sept. 24, 2017.

In Canada, cases involving federal law have a much simpler path: There’s only one Federal Court (which has jurisdiction over immigration and citizenship law) and one Federal Court of Appeal. Both are based in Ottawa, but have regional offices in other major cities across Canada where judges can go to hear cases. The two courts ultimately answer to the Supreme Court in Ottawa.

Justice Robart was acting on a request from two states, Washington and Minnesota, who sued the federal government over the Jan. 27 order. Their lawsuit wasn’t the only one, and other judges issued restraining orders targeting parts of the ban. But Justice Robart’s was the broadest, and it allowed visitors and immigrants from the seven countries affected by it – Iran, Iraq, Libya, Somalia, Sudan, Syria and Yemen – to travel as usual.

The Hawaiian case against the March 6 order – which removed Iraq from the list of banned countries – came from the state, which argued that it was unconstitutional and hindered the local tourist economy and universities, and local imam Ismail Elshikh, who argued that his mother-in-law would not be able to visit his family in Syria. Justice Watson criticized the “illogic” of the Trump administration’s arguments for the order and said in his March 15 ruling that “ ... a reasonable, objective observer ... would conclude that the executive order was issued with a purpose to disfavor a particular religion.”

Maryland’s Justice Theodore Chuang, meanwhile, was asked to hear a case from the American Civil Liberties Union and other plaintiffs in Maryland objecting to the March 6 ban. A day after hearing the case last March 15, Justice Chuang granted a preliminary, nationwide injunction.

As for the third travel ban issued last September – which changed the types of visas allowed for the six Muslim-majority countries, and added North Korea and certain types of Venezuelan government officials to the list – Justice Watson of Hawaii issued a ruling striking it down a day before it was to take effect, but only for the Muslim countries. (The state of Hawaii, whose legal challenge led to the ruling, did not ask about the bans on North Korean and Venezuelan travel.)

The 94 district courts are organized into 12 regions, or circuits, each of which has an appeals court. Washington State is in the Ninth Circuit, so when the White House objected to Justice Robart’s restraining order, they went to the Ninth Circuit Court of Appeals, based in San Francisco. Hawaii is in the Ninth Circuit too, so when the government appealed Justice Watson’s decision, it went back to San Francisco to do so; but to challenge Justice Huang’s decision, it was the Fourth Circuit, whose appeals court is based in Richmond, Va. 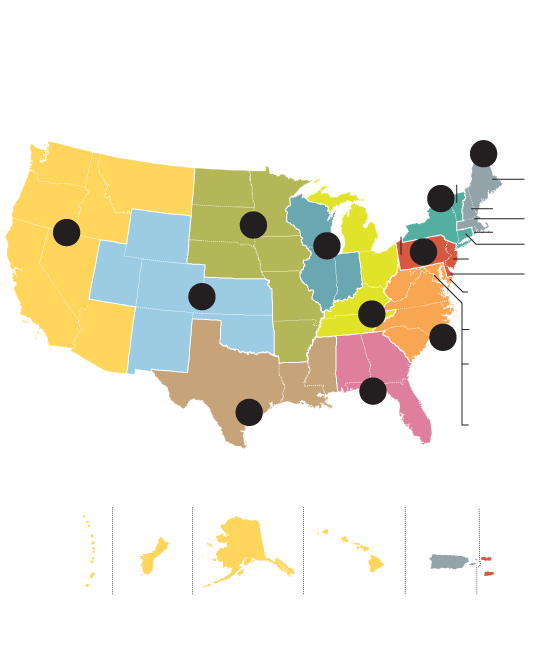 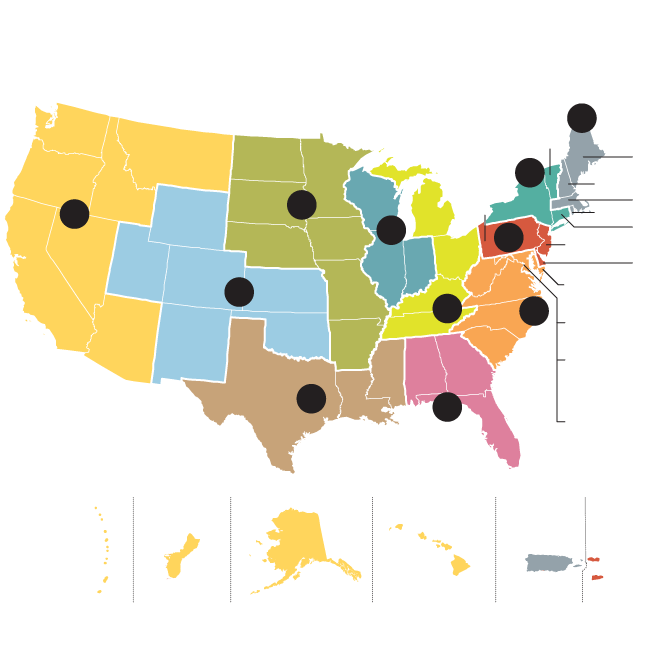 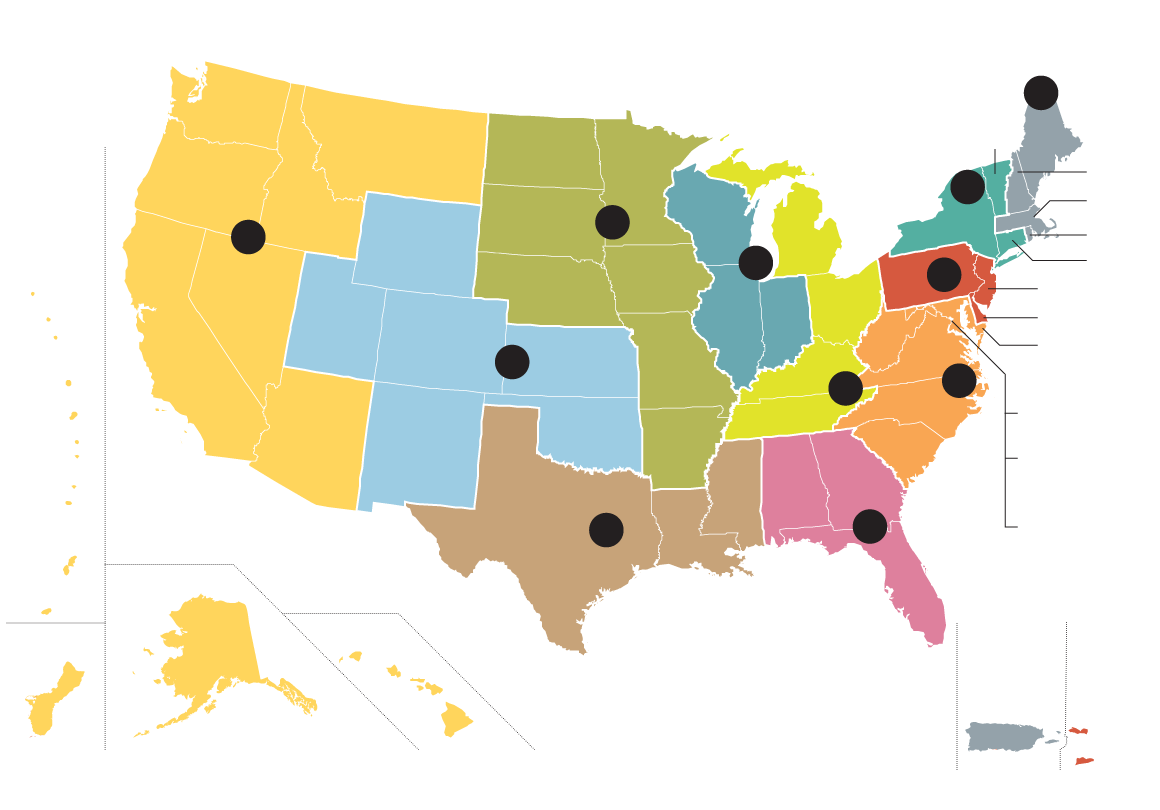 In May and June, Mr. Trump’s March 6 order got shot down as unconstitutional by both appeals courts. Both rulings strongly argued that national security was a flimsy justification for the policy Mr. Trump wanted to introduce:

FOURTH CIRCUIT: ”... [The executive order] in text speaks with vague words of national security, but in context drips with religious intolerance, animus, and discrimination.”

NINTH CIRCUIT: “In conclusion, the Order does not offer a sufficient justification to suspend the entry of more than 180 million people on the basis of nationality. National security is not a ‘talismanic incantation’ that, once invoked, can support any and all exercise of executive power ...”

Months later, the next version of Mr. Trump’s travel ban ended up on the Ninth Circuit’s radar. A Nov. 13 ruling let part of the third ban go into effect, but only for people without connections to the United States.

Last June, the government asked the U.S. Supreme Court, based in Washington, D.C., to weigh in on the March 6 order. If the Trump administration had sought the Supreme Court’s help any earlier than April, 2017 – when Mr. Trump’s nominee, Neil Gorsuch, was confirmed, filling the court’s then-vacant ninth seat – things could have gotten messy: In the event of a Supreme Court tie, a lower court’s ruling stands.

Things did get a bit messy anyway in June, when Mr. Trump tweeted scathing criticism of his own Justice Department, accusing it of having “watered down” the travel ban he wanted. Legal experts suggested this would potentially damage the government’s case before the court.

People, the lawyers and the courts can call it whatever they want, but I am calling it what we need and what it is, a TRAVEL BAN!

The Justice Dept. should have stayed with the original Travel Ban, not the watered down, politically correct version they submitted to S.C.

The Justice Dept. should ask for an expedited hearing of the watered down Travel Ban before the Supreme Court - & seek much tougher version!

In any event we are EXTREME VETTING people coming into the U.S. in order to help keep our country safe. The courts are slow and political!

But then, in a June 26 decision, the Supreme Court agreed to hear the government’s appeal of the travel ban, and granted an emergency request to let most of it take effect, with some protection for foreigners “with a credible claim of a bona fide relationship with a person or entity in the United States.” Examples of such people might include close relatives of American citizens (the decision mentions the Hawaiian imam’s mother-in-law as one such case), workers accepting American job offers, foreign academics visiting for guest lectures or students admitted to U.S. schools. Justice Gorsuch and two other conservative jurists, Clarence Thomas and Samuel Alito, said they would have granted the Trump administration’s request in full. “I fear the Court’s remedy will prove unworkable,” Justice Thomas wrote in a dissenting opinion.

The Supreme Court scuttled its plans to hear an appeal of the second ban when Mr. Trump replaced it with yet another one. This ban was more targeted, imposing full bans on some countries but allowing certain kinds of non-immigrant visas for others. In December, the court let Mr. Trump go ahead with the third ban in full. In April, the Trump administration lifted its ban on Chad, saying the central African nation had improved its security and information-sharing practices.

Fast-forward a few months to June of 2018, when the court issued a 5-4 decision upholding the third ban. Chief Justice John Roberts said the President had broad powers to regulate immigration, though in the written decision, he was careful not to endorse the sentiments behind Mr. Trump’s policy: “We express no view on the soundness of the policy.” In a dissenting opinion, Justice Sonia Sotomayor wrote that “a reasonable observer would conclude that the Proclamation was motivated by anti-Muslim animus,” and accused her co-jurists of “ignoring the facts, misconstruing our legal precedent, and turning a blind eye to the pain and suffering the Proclamation inflicts upon countless families and individuals, many of whom are United States citizens.”

Mr. Trump – then involved in another immigration-policy imbroglio over migrant families being separated at the U.S.-Mexico border – applauded the Supreme Court’s decision.