The race for the presidency in a country that has elected 26 military veterans to that office, half of them generals, is being roiled by reports that the current commander-in-chief – who was exempted from Vietnam-era service by a controversial bone spur diagnosis – has repeatedly disparaged American war dead as “losers” and “suckers.”

The remarks attributed to President Donald Trump have become an instant campaign issue, with Democratic nominee Joe Biden saying the President’s soul was “that of a coward.” Speaking of his late son, Beau, who was awarded the Bronze Star Medal for his service in Iraq, Mr. Biden asserted, “My son wasn’t a sucker.’'

But the issue has also served to underline the special place the armed forces, and especially fallen military personnel, have in the culture of a country that was founded in a late 18th-century battle against British colonial rulers; that conducted a four-year civil war over slavery in the middle of the 19th century; emerged as a world power after the First World War, early in the 20th century; enjoyed unsurpassed atomic supremacy after the Second World War; and engaged in what President John F. Kennedy, himself a Navy war hero, described in his 1961 Cold War-era inaugural address as “a long twilight struggle, year in and year out.”

Mr. Trump swiftly denied the remarks, characterizing them in a tweet Thursday night as “more made up Fake News given by disgusting & jealous failures in a disgraceful attempt to influence the 2020 Election!”

The report in The Atlantic said he declined visiting the Aisne-Marne American Cemetery near Paris in 2018, saying: “Why should I go to that cemetery? It’s filled with losers.” The publication also said Mr. Trump considered the almost 2,000 Marines who perished in the Battle of Belleau Wood in June, 1918, “suckers” for getting killed.

Analysts rushed to assess the damage these reports would have on the President’s re-election campaign but reached no consensus. He has in the past disparaged military heroes – especially Senator John McCain of Arizona, a former GOP presidential nominee who had been held for years in solitary confinement in Hanoi during the Vietnam War – and has survived controversies like this.

“This is different,” said former Democratic presidential candidate Bob Kerrey, who lost part of his leg in Vietnam before being elected governor of Nebraska and then senator. “This is a man who has no bounds to his selfishness.”

And this new contretemps has opened long-festering wounds in the American psyche.

“These comments are utterly outrageous and yet not surprising,’' said Andrew Bacevich, a Boston University expert in military history whose son was killed in Iraq in 2007. “He has contempt for the very idea of sacrifice.”

American history is full of presidential salutes to the nobility of military sacrifice. Speaking at Gettysburg in 1863, Abraham Lincoln said it was beyond his power to dedicate or consecrate the Union cemetery at the Civil War battle site because “the brave men, living and dead, who struggled here have consecrated it, far above our poor power to add or detract.” More than a century later, in the country’s bicentennial year of 1976, Gerald Ford, a Navy veteran of the Second World War, said, “There is no higher honour or more solemn privilege than to represent our nation in paying tribute to its honoured dead.” One of Ronald Reagan’s most famous speeches was his 1984 salute, at Normandy, to “the boys of Pointe du Hoc … the men who took the cliffs.”

Even presidents who did not serve in the military have been moved by the sacrifice Americans have made. At the 50th anniversary of D-Day, Bill Clinton, who faced withering criticism for avoiding the Vietnam-era draft, repeated a line from a speech marking the 50th anniversary of the Battle of Gettysburg by Woodrow Wilson, who also did not serve: “We are debtors to those 50 crowded years.” Then he added an unforgettable tribute of his own, to the veterans of the Second World War assembled before him: “When they were young, these men saved the world.”

The comments that launched the latest Trump furor were swiftly denounced by other political figures, particularly veterans.

“For the first time in my life, I feel sorry for Donald Trump,” said Representative Seth Moulton of Massachusetts, a former Democratic presidential candidate who served with the Marines in the Iraq War. “He’s clearly sick. This is so pathetic. There has never been a more selfish person in high office in American history. There’s truly never been anything like these remarks.’’

More than a score of military veterans in the House of Representatives called on Mr. Trump to apologize for his alleged remarks, only to conclude their letter by saying, “But then again, no apology would suffice.”

The letter, titled “For ourselves and our posterity,” begins, “As veterans of the United States Armed Forces and of the intelligence community, each one of us swore an oath to support and defend the Constitution of the United States,” then adds: “The commander-in-chief doesn’t understand this. The very notion of doing something for someone he’ll never meet, of committing to a cause that outlives him, is beyond his comprehension.”

That was the principal theme of the reaction to the comments attributed to Mr. Trump. “What gives people fulfilment in life is purpose and meaning – and these remarks tell military families that the sacrifice of their fallen heroes are not being honoured by the President,’' said Christine Whelan, the director of an institute on family issues at the University of Wisconsin. “These remarks tell those families that their sacrifices aren’t valued, and that really hurts.’' 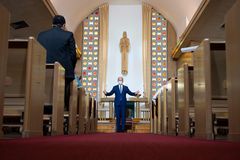 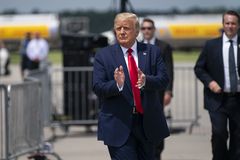