Here’s the view through the looking glass of American politics: Donald Trump, who in a volatile presidential campaign and through two years of Washington tumult reversed many of the assumptions of American public life, suddenly is reversing course himself with astonishing frequency. And this week he will face fresh pressure to reverse course on an important central-bank appointment.

He was going to shut down the border with Mexico. Now he won’t, at least for a while, maybe never. He was going to use his controversial emergency powers to construct a border wall. Perhaps in the next two years, if he’s lucky, and court challenges fail. He was going to undertake an offensive to eliminate the Obamacare health scheme. He put that off until 2021, though that assumes he will prevail in what is shaping up as a difficult re-election bid in which health care is sure to be a divisive issue. He was going to shut down foreign aid to a set of Central American countries he blamed for a caravan of immigrants he said was threatening American national security. Maybe some other time, if ever.

No political figure, of course, is an avatar of consistency. Prime Minister Louis St. Laurent once described a campaign pledge as a “mere cream puff of a thing, with more air than substance in it.” John Diefenbaker pledged to abolish the closure rule in Parliament and didn’t. U.S. President George H.W. Bush vowed in front of a raucous 1988 Republican National Convention that he would veto any tax increase that Congress sent him and then, two years later, blithely signed one into law.

Mr. Trump has never felt confined by his previous remarks and, though not a literary scholar, he would embrace the aphorism of the 19th-century American transcendentalist thinker Ralph Waldo Emerson that consistency was “the hobgoblin of little minds, adored by little statesmen and philosophers and divines.” But even by the measure of Mr. Trump – whose “evolution” from abortion-rights proponent to ardent foe of legal abortion took many years – his recent reverses have come at astonishing speed and with astonishing impact.

The American political philosopher Irving Kristol once said that a liberal who was transformed into a neo-conservative was someone who had been “mugged by reality,” and it is clear that Mr. Trump has been mugged somewhere in the 16 blocks that separate the White House from Capitol Hill.

It was American business executives along with congressional Republicans who pushed the President to keep the southern border open; they made it clear that shutting the Mexican border would have grave financial effects on American commerce. It was members of the GOP Senate leadership who persuaded Mr. Trump to abandon his nascent mobilization against Obamacare; they realized that Republican opposition to Obamacare was a principal element in the party’s electoral debacle during the 2018 midterm congressional contests that delivered control of the House to the Democrats. And it was a bipartisan team of lawmakers in the very region where Mr. Trump was determined to cut foreign aid that protested that the President’s vow was counterproductive.

Indeed, Mr. Trump is falling prey to some of the very obstacles Mr. Diefenbaker confronted when he led Canada from 1957 to 1963. The Canadian student of power Peter C. Newman wrote that the 13th prime minister, a barrister who had never worked for anyone else, had difficulty adjusting to a line of work where co-operation, conciliation and compromise were the currency of the realm. “He never administered anything more complicated than a walk-up law office,” Mr. Newman wrote.

For his part, Mr. Trump ran his real estate and casino business as a solo entrepreneur, free-wheeling and boldly wheeler-dealing, requiring the consent of no one, sometimes paying no mind to conventions or legalisms. As President, he confronted the need to win congressional approval for much of his agenda, though – as in the case of the national emergency he declared when Congress failed to endorse his action – he has been artful in evading restrictions.

This month, however, he has found little manoeuvrability between his inclinations and congressional prerogatives. Though the Democratic control of the House has stymied his initiatives, it was largely Republicans who have been standing in his way.

Republican Senator John Cornyn described the border-closing notion as “bad for everybody,” with his fellow Texas Republican, Senator Ted Cruz calling the idea “devastating to Texas,” adding: “Millions of jobs, in Texas and across the country, depend upon trade with Mexico, and the federal government shouldn’t do anything to jeopardize those jobs.”

For the first time, Senate Majority Leader Mitch McConnell of Kentucky, who controls the flow of legislation onto the floor, has been balking at Trump initiatives. He dismissed the border proposal as “catastrophic” and when confronted with the prospect of shepherding legislation to repeal Obamacare, said simply: “I made it clear to [the President] we would not be doing that in the Senate.”

Four of Mr. Trump’s last six presidential predecessors went to the White House after serving as state governors. Mr. Trump did not – but has discovered, unhappily, that in Washington there are governors on his activities. 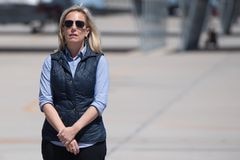 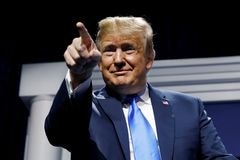