A federal appeals court on Monday tossed out three lawsuits challenging President Donald Trump’s ban on travellers from predominantly Muslim countries, a victory for the Trump administration in its years-long defence of the ban.

A three-judge panel of the Richmond-based 4th U.S. Circuit Court of Appeals found that a federal judge in Maryland made a mistake when he refused to dismiss the lawsuits after the Supreme Court upheld the ban in 2018 in a separate legal challenge filed in Hawaii.

The ban, put in place just a week after Trump took office in January 2017, sparked an international outcry from Muslim advocates and others who said it was rooted in religious bias.

“We conclude that the district court misunderstood the import of the Supreme Court’s decision in Hawaii and the legal principles it applied,” Judge Paul Niemeyer wrote in the unanimous decision.

Justin Cox, an attorney with the International Refugee Assistance Project, the lead plaintiff in the case, said the groups who sued are considering their legal options, which could include asking the panel to reconsider its ruling, appealing to the full 4th Circuit court of 15 judges or asking the Supreme Court to hear the case.

“The panel definitely got the legal issues wrong. It seems unlikely that this will be the final word,” Cox said.

“Basically, it comes down to can the president shield obviously bigoted actions by essentially laundering them through Cabinet officials coming up with neutral-seeming criteria?” he said.

The U.S. Department of Justice declined to comment on the ruling.

During a hearing in January, Mark Mosier, an attorney representing U.S. citizens and permanent residents whose relatives have been unable to enter the U.S. because of the ban, asked the court to allow the legal challenges to proceed.

Mosier argued that the Supreme Court – in the Hawaii case – rejected a preliminary injunction to block the travel ban, but did not decide the merits of the constitutional claims made in the lawsuits. The plaintiffs argued that the travel ban violates the First Amendment’s Establishment Clause, which prohibits the government from favouring one religion over another.

Mosier said the lawsuits should be allowed to proceed so the plaintiffs can gather evidence on their claim that the travel ban is rooted in anti-Muslim bias and that the Trump administration’s claim of national security concerns is a pretext for the policy.

But the three 4th Circuit judges who heard the case – all nominated by Republican presidents – repeatedly questioned Mosier about the Supreme Court’s finding that there is a plausible rationale to support the travel ban.

The ban applies to travellers from Iran, Libya, Somalia, Syria and Yemen. It also affects two non-Muslim countries, keeping out travellers from North Korea and some Venezuelan government officials and their families. In January, the administration imposed new entry restrictions – but not a total travel ban – on travellers from six additional countries, including Myanmar, Eritrea, Kyrgyzstan, Nigeria, Sudan and Tanzania.

Trump has said the ban is aimed at making the U.S. safer from potentially hostile foreigners.

Joshua Waldman, an appellate attorney with the U.S. Department of Justice, argued that the Supreme Court “rejected precisely the same arguments” being made by the challengers in the Maryland cases.

U.S. District Court Judge Theodore Chuang had ruled that the lawsuits should move forward to the discovery phase, when the plaintiffs have said they would seek records from the Trump administration on the origins of the ban and how it has been enforced over the last three years.

Federal appeals courts – including the 4th Circuit – had upheld rulings from federal judges who blocked the travel ban from taking effect. But the Supreme Court came to a different conclusion.

In a 5-4 ruling, Chief Justice John Roberts wrote that the travel ban was well within U.S. presidents’ considerable authority over immigration and responsibility for keeping the nation safe. 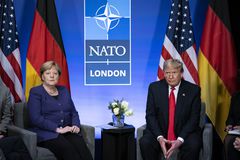 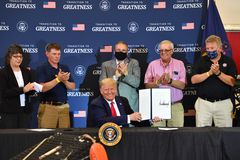 Barr says he didn’t give tactical order to clear protesters before Trump appearance at church
June 5, 2020 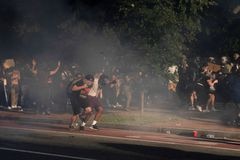