President Donald Trump is suggesting the United States should back off on measures meant to control the spread of the novel coronavirus as soon as next week because social distancing is hurting the economy – a message that runs directly counter to the warnings of public-health officials and virtually every other top politician fighting the outbreak.

At a White House press conference on Monday evening, Mr. Trump said the United States would face “tremendous death” because people who have lost their jobs due to social distancing will kill themselves. He minimized the threat of the coronavirus by comparing it to car crashes (“that doesn’t mean we’re going to tell everybody ‘no more driving of cars’”). And he said measures to contain the pandemic “will end soon.”

The President said he would make a decision by next Tuesday on whether to continue with social-distancing guidelines. He issued the directives last week for a 15-day period.

Congress tried to negotiate a US$1.6-trillion economic stimulus package that would include bailouts for industries affected by closings, and cash payments for Americans. Senate Democrats refused to help the Republican majority pass the bill until provisions were included to ensure bailout funds weren’t used to help executives and shareholders rather than front-line workers.

The President’s message on Monday reiterated a similar message from a tweet late the previous night. Even some of Mr. Trump’s allies were swift to rebuke him.

“President Trump’s best decision was stopping travel from China early on," tweeted Republican Senator Lindsey Graham, a staunch White House loyalist. "I hope we will not undercut that decision by suggesting we back off aggressive containment policies within the United States.”

Ohio Governor Mike DeWine, also a Republican, spent Monday urging his citizens to stay out of public places. “We haven’t faced an enemy like we are facing today in 102 years. We are at war,” he tweeted.

Mr. DeWine, along with the governors of Michigan and Ohio, ordered non-essential businesses to close, joining states such as California, New York and Illinois in imposing sweeping social restrictions in a bid to contain the pandemic.

Prime Minister Justin Trudeau also delivered the exact opposite message to that of Mr. Trump on Monday, chiding Canadians who have refused to do their part to limit the spread of the virus: “Enough is enough. Go home and stay home.”

New York Governor Andrew Cuomo, whose state has borne the brunt of U.S. COVID-19 cases, said on Monday he would at some point have to find ways for some people to return to work while maintaining containment measures. But for now, he said, citizens must “make peace with” the prospect of staying at home for the foreseeable future.

Leana Wen, a public-health expert at George Washington University, said Mr. Trump’s words could prove dangerous at a crucial time. The country is in a “narrow window” to get the pandemic under control, she said.

“Right now is exactly the wrong time to be sending mixed messages. It’s the wrong time to be dialing back the measures that have been put into place which, frankly, are not nearly strict enough to control the spread,” said Dr. Wen, who is also an emergency-room physician and the former top public-health official for the city of Baltimore. “Things are going to get much worse this week. They are going to get much worse the week after.”

Mr. Trump himself likely cannot lift shutdown orders across the country, as most of these have been imposed by state or local governments. But his words still have significant influence over the behaviour of his supporters. After the President last week touted an unproven treatment for COVID-19, prescriptions for the drug spiked.

“There are a lot of people for whom the President is the most credible messenger,” she said. “We know he has an outsized influence over millions and millions of people.”

Mr. Trump’s comments are a return to his initial attempts to minimize the seriousness of the coronavirus. At a press conference in February, he insisted U.S. cases were “going very substantially down,” when in fact they were going up. At a campaign rally, he said concerns over the virus were a “new hoax” by his political opponents.

Nina Yamanis, a public-health expert at American University in Washington, said lifting the restrictions next week would have dire consequences.

“We’d see a spike in cases and then, a week or two after that, a spike in deaths. From what we’ve seen around the globe, that seems to be the trajectory we’d be on,” she said. “It’s ridiculous to think in this country that we have some kind of exceptionalism to the virus.” 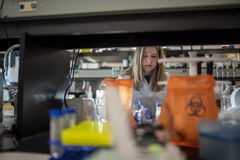 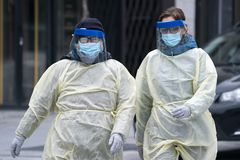 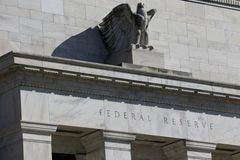