In a revelation Sunday, Mr. Esper said in a television interview that Mr. Trump believed embassies were something Mr. Soleimani might want to target, but had no evidence of a specific plot.

“The President didn’t say there was a tangible – he didn’t cite a specific piece of evidence," Mr. Esper said on CBS. Pressed on whether there was a piece of intelligence that showed Mr. Soleimani wanted to attack U.S. embassies, Mr. Esper said: “I didn’t see one with regard to four embassies.”

The President’s reasons for ordering Mr. Soleimani’s death have loomed large as the world has grappled with its aftermath, including Iran’s shooting down of a Ukrainian passenger plane carrying dozens of Canadians. Mr. Trump’s critics have argued that killing Mr. Soleimani was not worth the consequences if it was not necessary to prevent the imminent killing of Americans.

Mr. Esper more than once tried to walk back Mr. Trump’s claims that he had evidence Mr. Soleimani was planning such an attack.

“The President never said there was specific intelligence to four different embassies,” he told CNN Sunday. “I believe there were threats to more than, to multiple embassies.”

National security adviser Robert O’Brien also suggested that the United States did not know what Mr. Soleimani was planning, but assumed he would go after an embassy.

“It’s always difficult, even with the exquisite intel that we have, to know exactly what the targets are. But it’s certainly consistent with the intel to assume that they would’ve hit embassies in at least four countries,” he said Sunday on Fox News.

Mr. Trump’s decision to take out Mr. Soleimani followed violent protests by Iranian-backed militias at the U.S.’s Baghdad embassy last month. The President on Friday said he feared a repeat of the 2012 attack on a U.S. diplomatic compound in Benghazi, Libya, in which two American diplomats were killed.

Mr. Trump on Sunday again tweeted support for protesters in Tehran, who have taken to the streets over Iran’s shooting down of Ukraine International Airlines Flight 752.

“To the leaders of Iran - DO NOT KILL YOUR PROTESTERS. Thousands have already been killed or imprisoned by you, and the World is watching. More importantly, the USA is watching. Turn your internet back on and let reporters roam free! Stop the killing of your great Iranian people!” he said on Twitter.

Mr. Trump’s tweets did not mention the cause of the protests. The Iranian government for days denied shooting down the plane, before admitting that its military took it down with missiles. Iran has said a military commander mistook the flight for a cruise missile in the hours after Tehran bombed U.S. bases in Iraq to retaliate for Mr. Soleimani’s death.

The President described the downing of the plane on Thursday as “a tragic thing,” but has so far not outlined any consequences for Iran. Secretary of State Mike Pompeo on Friday said “we and the world will take appropriate actions,” but that he would wait for the results of a full investigation to determine what those would be.

The shooting down of the plane killed 176 people, including 138 heading to Canada of whom 57 were Canadian citizens.

Some Democrats have accused Mr. Trump of setting off the chain of events that led to the deaths by taking out Mr. Soleimani.

“Innocent civilians are now dead because they were caught in the middle of an unnecessary and unwanted military tit for tat,” Democratic presidential candidate Pete Buttigieg tweeted last week.

Jackie Speier, a California congresswoman, told CNN that the tragedy was “yet another example of collateral damage from the actions that have been taken in a provocative way by the President of the United States.” 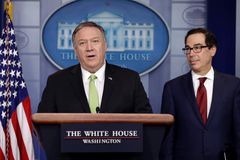