Former Vice President Joe Biden on Friday took a series of unusual rhetorical detours at the end of a town-hall-style campaign event nominally dedicated to health care, speculating about how a political assassination of Barack Obama might have affected the country in 2008 and recalling that he was accused of being gay because of his support of women’s rights in the 1970s.

After speaking about the health care plan he introduced last month and taking a few questions, Biden grew most animated as he recalled the fraught political era of 1968, when he was a college senior, and two of his political heroes, Martin Luther King Jr. and Robert F. Kennedy, were assassinated within weeks of each other.

“I think of where we are at the moment. You know, none of you men are old — women are old enough, but a couple of you guys are old enough to remember. I graduated in 1968. Everybody before me was, drop out, go to Haight-Ashbury, don’t trust anybody over 30, everybody not getting involved. I’m serious, I know no woman will shake their head and acknowledge it, but you guys know what I’m talking about. Right? But then what happened? Dr. Ki— I only have two political heroes. I have one hero who was my dad, but I have two political heroes were Martin Luther King and Bobby Kennedy. My senior semester they were both shot and killed. Imagine what would have happened if, God forbid, Barack Obama had been assassinated after becoming the de facto nominee. What would have happened in America?

“Things changed,” he continued. “You had over 40 kids shot at Kent State on a beautiful lawn by the National Guard.” The shooting in question, in May 1970 during a Vietnam War protest, in fact ended with four students shot dead and nine wounded.

Biden, 76, was making the point that events of the late 1960s and early ’70s raised his political awareness and propelled him into a political career. He ran successfully for the U.S. Senate in 1972 at age 29.

A campaign spokesman said Biden had previously drawn an analogy between an Obama assassination and the political killings of 1968 when speaking to younger audiences not alive at the time.

In 2008, running for the Democratic presidential nomination, Hillary Clinton drew criticism when she referenced the political assassinations of 1968 as she defended staying in the long primary battle against Obama. She noted first that Bill Clinton had not wrapped up the nomination until June 1992 and then added, “We all remember Bobby Kennedy was assassinated in June in California.”

At the event Friday, Biden also recalled his early support for women’s rights, including the Equal Rights Amendment, and how he was he was sneered at for being on the edge of social change. He said critics had said, “Well, you know why Biden is for the ERA, he’s probably gay.”

“But here’s the deal. An entire generation was energized. We finally finished the Voting Rights Act. We finally got the Civil Rights Act back on the road. We finally were in a position where we started to begin the women’s movement and began to treat women — I remember because I was such a big supporter of the ERA in 1972, quote — to show you how things have changed, thank God — ‘Well, you know why Biden is for the ERA, he’s probably gay.’ Not a joke.”

Biden, the front-runner in the race for the Democratic presidential nomination, compared his political awakening in his 20s to the present moment, asking how many members of the audience, on the campus of Dartmouth College, were high school or college students.

About 40 hands went up in the audience of several hundred.

“Unless I’m mistaken, Donald Trump did for your generation what the loss of two of my heroes did for mine,” he told the students, adding, “What they did was make you realize, my God, we’re in trouble.”

Biden’s walk-off line was a mic drop. Wondering if anyone two years ago would have believed a movie about the Trump administration so far, he invoked Trump calling himself “the chosen one” while speaking to reporters outside the White House this week.

“I am the savior,” Biden intoned, paraphrasing the president. 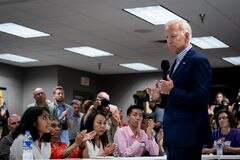 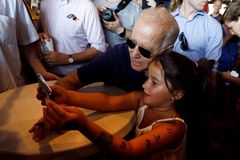 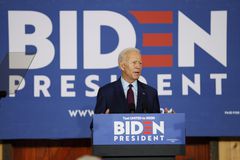