The U.S. ambassador to the European Union says he told a top Ukrainian official the Trump administration would keep withholding US$400-million in promised military aid until Kyiv agreed to investigate a company tied to the son of former U.S. vice-president Joe Biden.

The revelation from Gordon Sondland provides further evidence that U.S. President Donald Trump tried to use the money to force Ukraine to tarnish a top potential challenger in next year’s election. And it runs counter to Mr. Trump’s repeated assertion there was “no quid pro quo” when he demanded the investigation from Ukrainian President Volodymyr Zelensky in a July telephone call.

The Democrat-led House of Representatives’ impeachment inquiry is becoming more public, releasing transcripts of interviews with key witnesses and planning open hearings this month. The inquiry is investigating whether Mr. Trump abused his power by soliciting foreign interference in the 2020 vote.

Mr. Sondland, an Oregon hotelier appointed to the EU post after donating $1-million to Mr. Trump’s inaugural committee, had previously claimed he could not remember key conversations about the bartering of military aid for the investigations. In one text exchange with other diplomats, he repeated Mr. Trump’s assertion that there was no “quid pro quo.”

But Mr. Sondland reversed himself in a letter this week to the congressional committee running the impeachment inquiry, which he submitted as a “supplement” to his deposition last month. The letter was released Tuesday along with hundreds of pages of transcripts of testimony to the inquiry.

In his letter, Mr. Sondland wrote that Mr. Zelensky asked U.S. Vice-President Mike Pence at a meeting in Warsaw on Sept. 1 about the sudden and unexplained freeze the administration had put on military aid. After that sit-down, Mr. Sondland pulled aside Andriy Yermak, one of the Ukrainian President’s top advisers.

“I said that resumption of U.S. aid would likely not occur until Ukraine provided the public anti-corruption statement that we had been discussing for many weeks,” Mr. Sondland wrote.

The “anti-corruption statement” would have announced an investigation into Burisma, the Ukrainian natural gas company on whose board Hunter Biden once sat. Mr. Sondland said in the letter that he believed freezing the military aid was “ill-advised,” and he wasn’t sure who exactly in the administration had frozen it, but assumed it was meant to press Ukraine into the investigation.

Mr. Sondland’s letter comes after two other U.S. officials, diplomat Bill Taylor and national security council adviser Tim Morrison, appeared to contradict his earlier testimony in their own congressional depositions. Mr. Taylor and Mr. Morrison said that Mr. Sondland had told them the military aid was being held back to get Ukraine to start an investigation.

Mr. Sondland wrote this week that reading Mr. Taylor’s and Mr. Morrison’s testimony had “refreshed my recollection” and “I now do recall” that he had in fact said the freezing of the funds was connected to Mr. Trump’s demand for an investigation.

Stephanie Grisham, the White House press secretary, dismissed Mr. Sondland’s submission, saying in a statement that he “cannot identify any solid source” for his assertion that the aid was tied to the investigation demand. “No amount of salacious media-biased headlines, which are clearly designed to influence the narrative, change the fact that the President has done nothing wrong,” she said.

At one point, Mr. Zelensky agreed to give a broad statement promising to investigate corruption. Mr. Yermak showed the proposed statement to Kurt Volker, Mr. Trump’s point-man on Ukraine’s fight against Russian-backed insurgents. Mr. Volker edited it to add an explicit reference to probing Burisma, the text messages showed.

The Ukrainians were uneasy with the change, but Mr. Giuliani insisted on it, Mr. Volker testified. As a result, Mr. Zelensky never made the announcement.

Another text exchange, from May, showed that some officials were already uncomfortable with Mr. Giuliani’s efforts to go after Mr. Biden in Ukraine. “Can anyone hope to succeed with the Giuliani-Biden issue swirling for the next 18 months?” Mr. Taylor wrote to Mr. Volker, confiding his fears in taking up a diplomatic posting in Ukraine.

Tuesday’s disclosures were the second wave of releases from the impeachment inquiry. On Monday, the committee made public the testimony of Marie Yovanovitch, the former U.S. ambassador to Ukraine, and Michael McKinley, an ex-adviser to Secretary of State Mike Pompeo.

Mr. McKinley, for his part, said he resigned because he was “deeply disturbed … that foreign governments were being approached to procure negative information on political opponents.”

Trump’s impeachment would be the ultimate American condemnation
November 5, 2019 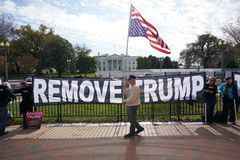 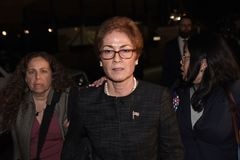 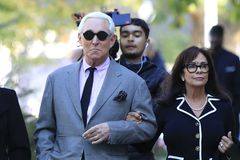