U.S. President Donald Trump has pulled a U-turn under a wave of condemnation over his embrace of Russian President Vladimir Putin, saying he accepts U.S. intelligence assessments that the Kremlin interfered in the U.S.’s 2016 election and vowing to make sure it doesn’t happen again.

But whether the President’s about-face will be enough to calm the storm is an open question: Mr. Trump’s retreat relied on an explanation that the entire episode was a misunderstanding. And the President left unexplained most of his comments siding with Mr. Putin.

Mr. Trump said on Tuesday that he had simply misspoken during his press conference with the Russian autocrat the previous day, and had accidentally said the exact opposite of what he meant. When Mr. Trump had declared he didn’t “see any reason why it would be Russia” that had interfered in the election, the President said, he had actually intended to say he didn’t “see any reason why it wouldn’t be Russia.”

“I said the word ‘would’ instead of ‘wouldn’t,’ ” Mr. Trump said ahead of a White House meeting with Republican members of Congress on Tuesday. “That probably clarified things.”

Mr. Trump’s explanation did not address several other remarks he made with Mr. Putin, including that he had “confidence in both” the Russian President and U.S. intelligence agencies, that Mr. Putin was “extremely strong and powerful in his denial” of the hacking and that the “foolish” United States was as much to blame as Russia for the two countries’ poor relationship. He also did not explain why he had refused the previous day to condemn Russia’s election hacking.

While the President gave U.S. intelligence the affirmation he had denied the previous day, he added a few caveats.

“I accept our intelligence community’s conclusion that Russia’s meddling in the 2016 election took place. Could be other people, also. There’s a lot of people out there,” he said. Mr. Trump also said Russia’s hacking had “no impact” on the election outcome and his meeting with Mr. Putin was the “most successful visit” on Mr. Trump’s European trip.

The President read from a scripted speech, to which he had added in black ink “THERE WAS NO COLLUSION” and crossed out an incomplete sentence that read: “Anyone involved in that meddling to justice.”

The damage control was a bid to contain fallout from Mr. Trump’s allies and adversaries alike.

Republican Senate Majority Leader Mitch McConnell told reporters in the U.S. Capitol that there was “indisputable evidence Russia tried to manipulate the election,” and directly contradicted Mr. Trump’s assertion that the European Union is a “foe” of the United States. “We believe the European Union countries are our friends, the Russians are not,” Mr. McConnell said.

Fox News, the right-wing cable channel from which the President and his base get much of their information, aired criticism of Mr. Trump’s comments, with anchor Neil Cavuto accusing the President of allowing Mr. Putin to “get away with it” and labelling Mr. Trump’s performance “disgusting.” Fox reporter John Roberts said Mr. Trump had thrown his country “under the bus.”

Even Newt Gingrich, the former House of Representative Speaker who serves as a loyal defender of Mr. Trump on cable news, said on Twitter that the President had made “the most serious mistake of his presidency” in Helsinki and called on him to immediately correct it.

Some went even further, with House Minority Leader Nancy Pelosi floating the possibility Mr. Putin had compromising material on Mr. Trump and was blackmailing him. And former CIA chief John Brennan said Mr. Trump’s behaviour was grounds for impeachment.

At first, the President doubled down, using a Fox interview Monday night to tout Mr. Putin’s assurances that there had been no collusion with Mr. Trump’s campaign. Then, on Tuesday morning, Mr. Trump tweeted about how well his meeting with Mr. Putin had gone. By early afternoon, however, the White House has decided to beat a retreat.

Some Republicans were eager to believe Mr. Trump’s explanation in hopes of putting the matter behind them. “I’m just glad he clarified it. I can’t read his intentions or what he meant to say at the time,” Florida Senator Marco Rubio told reporters.

But with congressional elections looming in November – and Democrats already riding a surge of anti-Trump anger from their base – the President’s treatment of Mr. Putin is unlikely to be quickly forgotten. Democratic control of Congress would increase the chances of Mr. Trump being impeached if investigations turn up any sign of collusion. 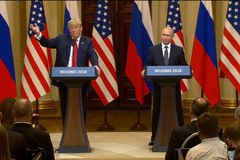 Woman who sought ‘back channel’ meeting for Trump and Putin is charged as Russian agent
July 16, 2018 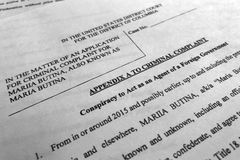 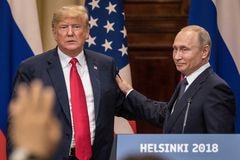