The United States Senate has overwhelmingly approved the U.S.-Mexico-Canada Agreement, rushing through one of President Donald Trump's priority files before starting his impeachment trial.

The USMCA, a rejigged version of NAFTA, passed by an 89 to 10 margin late Thursday morning. It will now go to Mr. Trump for his final signature.

Canada also still must ratify the deal for it to take effect. Deputy Prime Minister Chrystia Freeland, who is expected to introduce legislation in the House of Commons in coming weeks, has said she would press forward with ratification when the U.S. did.

“The implementing legislation will be a top priority when Parliament resumes later this month,” her spokesman, Alex Lawrence, wrote in an email.

In the U.S., the deal forged a rare bipartisan coalition between Republicans loyal to the President and Democrats enticed by the agreement’s stronger protections for organized labour. The Senate vote came a day after Mr. Trump signed a limited trade deal with China, and right before his impeachment trial for alleged abuse of power and obstruction of Congress formally got under way.

In the Oval Office, Mr. Trump lamented that the fulfilment of one of his central campaign promises – tearing up or renegotiating NAFTA – would be overshadowed by impeachment.

“Today, we just had passed the USMCA, it’s going to take the place of NAFTA, which was a terrible deal, and the USMCA will probably be second to this witch-hunt hoax,” he said.

The USMCA preserves most of NAFTA, but adds a handful of protectionist changes such as a requirement that more components of North American cars and trucks be made in the three countries. To win Democratic support, the Trump administration also agreed to write tighter labour standards, mostly targeted at Mexico, into the pact.

Senate Democratic Leader Chuck Schumer also voted against the agreement, saying it failed to include any provisions for fighting climate change. “On the greatest issue facing our planet, addressing the climate crisis, the USMCA falls far too short,” he said in a statement.

Only one Republican, Pennsylvania Senator Pat Toomey, voted against the deal because it is more protectionist than the existing trade pact.

Editor’s note: (Jan. 17, 2020): An earlier version of this article included incorrect information on ratification. This version has been updated.

What is in the new North American trade pact?
Subscriber content
January 16, 2020 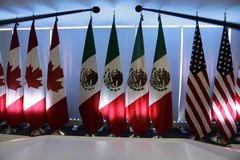 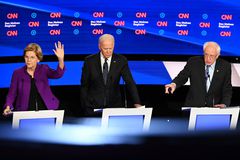