The Supreme Court on Thursday turned away pleas from anti-abortion activists to make it easier for them to protest outside clinics, declining to wade back into the abortion debate just days after striking down a Louisiana law regulating abortion clinics.

The justices said in a written order that they would not hear cases from Chicago and Harrisburg, Pennsylvania, where anti-abortion activists had challenged ordinances that restrict their behaviour outside clinics.

As is usual, the justices did not comment in turning away the cases. The order from the court noted Justice Clarence Thomas would have heard the Chicago case.

The Supreme Court has since the late 1990s heard several cases involving demonstration-free zones, called buffer zones, outside abortion clinics. Most recently, in 2014, the justices unanimously struck down a law that created a 35-foot protest-free zone outside Massachusetts abortion clinics. The court said Massachusetts’ law, which made it a crime to stand in the protest-free zone for most people not entering or exiting the clinic or passing by, was an unconstitutional restraint on the free-speech rights of protesters.

On Thursday, one of the two cases the court declined to take up involved an ordinance passed by the city counsel in Harrisburg, Pennsylvania’s capital, in 2012 that made it illegal to “congregate, patrol, picket or demonstrate” in a zone 20 feet from a health care facility. Anti-abortion activists sued, arguing that the ordinance violates their free speech rights. Lower courts have upheld the ordinance, however, ruling it doesn’t apply to “sidewalk counselling,” where individuals who oppose abortion offer assistance and information about alternatives to abortion to those entering a clinic.

The second case the court turned away on Thursday involved a Chicago ordinance that regulates the space 50 feet from the entrance of any abortion clinic or other medical facility. In that space, a person cannot come within 8 feet of another person without their consent to hand them information or engage in “oral protest, education, or counselling.” The ordinance was modelled on a statute upheld by the Supreme Court in 2000.

Anti-abortion activists told the Supreme Court that Chicago’s ordinance violates their free speech rights and that the high court’s decision from 2000 should be reconsidered. A trial court previously dismissed the lawsuit and an appeals court upheld that decision.

The court’s announcement that it would not hear the cases comes on the heels of its decision Monday that a Louisiana law requiring doctors who perform abortions to have admitting privileges at nearby hospitals violates abortion rights the court first announced in the landmark Roe v. Wade decision in 1973. The decision divided the court’s conservatives and liberals 5-4 with Chief Justice John Roberts joining his four more liberal colleagues to strike down the law.

It was the first big abortion case of the Trump era and a surprising defeat for abortion opponents, who thought that the court’s new conservative majority with two members appointed by President Donald Trump would start chipping away at abortion access.

As a result of the decision, the justices also on Thursday ordered lower courts to revisit cases involving Indiana abortion laws previously blocked by courts. One required a woman to have an ultrasound 18 hours before having an abortion and the other would have made it tougher for girls under age 18 to get an abortion without their parents’ knowledge.

In their decision earlier this week, the justices told lower courts how to determine whether a restriction is permissible or puts an unconstitutional obstacle in the way of women who want an abortion. 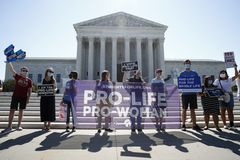