Deep-pocketed interest groups and activists on both sides of the long-running fight over gun laws are gearing up for a major clash in Virginia, now a key election battleground in the issue after Republicans on Tuesday adjourned a special legislative session called by the governor to consider gun-control measures in the wake of a mass shooting.

The state’s off-year election will be closely watched because Virginia is the only state where control of the Legislature is up for grabs in 2019. Republicans currently hold a narrow majority.

GOP lawmakers abruptly ended the session after less than two hours and postponed any movement on gun laws until after the November election. Democrats and gun-control advocates vowed to force them from office.

“If these ‘leaders’ won’t enact solutions that their own constituents are demanding, then we’re going to fight tooth and nail for representatives who will,” Kris Brown, president of the Brady gun-control group, said in a statement.

Scores of gun-control advocates gathered Tuesday outside the Capitol, jeering at Republicans like House Speaker Kirk Cox. Meanwhile, hundreds of gun-rights supporters filed through a legislative office building to meet with lawmakers and in a show of force against stricter gun laws.

“The gun control lobby says this every election cycle, and time and time again the hundreds of thousands of Virginians who support their fundamental right to self-defence go to the polls,” she said. “...This year the gun control lobby is screaming louder than ever in an effort to distract voters” from scandals involving top Democrats.

Virginia is generally considered a gun-friendly state and is home to NRA’s headquarters. The General Assembly has rejected numerous gun-control bills – including several proposed for the special session – year after year.

Former New York City Mayor Michael Bloomberg’s gun-control group made a splash at the tail end of the 2015 legislative elections by announcing it was spending $2.2 million in two open state Senate races to help the Democratic candidates.

Republicans were shocked at the amount the billionaire’s group was putting into Virginia, but the spending did not appear to make much difference. One Bloomberg-backed candidate won in a Northern Virginia district that has voted reliably Democratic by large margins in past elections while the other Democratic nominee lost in pivotal swing-seat in the Richmond area.

Democratic Gov. Ralph Northam summoned the Republican-led Legislature to the Capitol to address gun violence in the wake of the May 31 attack that killed a dozen people in Virginia Beach. He put forward a package of eight gun-control measures and called for “votes and laws, not thoughts and prayers” in response to the massacre.

Republicans said it was Northam, still dealing with the fallout of a blackface scandal that almost drove him from office, who had acted improperly. They assigned the state’s bipartisan crime commission to study policy proposals that might have prevented the shooting.

“Quite frankly, we need to take a little bit deeper look at these issues and actually do something rather than stage manage a vote in which we’re just trying to embarrass each other,” state Sen. Mark Obenshain said.

Richard Keene, a 51-year-old gun owner from Chesterfield, said the session turned out to be “a lot of hype for nothing.”

“I’m a little disappointed in everyone, actually,” he said. “I don’t feel like the common, normal person, the normal American, is represented any more. It’s frustrating.”

The special session got off to a chaotic start, with the Republican Senate majority leader averting a mutiny in the GOP caucus by publicly disavowing a gun-control bill he proposed only a day earlier.

On Monday, the leader, Tommy Norment, shocked fellow Republicans by filing surprise legislation to broadly ban guns in any government building statewide. That prompted an immediate backlash in the GOP caucus, which controls the chamber by a slim 20-19 advantage. His top vote-counter, Sen. Bill Stanley, resigned as majority whip in protest.

But the departure did not last long. Stanley said Norment apologized and asked Stanley to reconsider his resignation. The caucus quickly restored him to his position, and Norment announced that he would throw out his own bill.

After the adjournment, Northam issued a statement saying it was “shameful and disappointing” that Republicans “refuse to do their jobs and take immediate action to save lives.”

The Virginia Beach attack began when a civil engineer opened fire on his co-workers and others. Police said DeWayne Craddock used two semi-automatic handguns, a silencer and extended ammunition magazines to kill 12 people at a municipal building. Craddock was then killed in a gun battle with police. 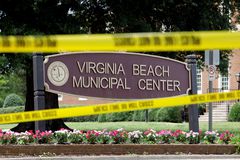