No agreement came out of a meeting between U.S. congressional leaders and President Donald Trump on Wednesday to end a partial government shutdown now in its 12th day as the president stuck to his demand for $5-billion in border wall funding fiercely opposed by Democrats.

Congressional leaders are expected to return to the White House on Friday to resume talks, signalling the shutdown will likely stretch into the weekend.

The White House convened the meeting to try to convince Democrats that funding a wall on the southern border with Mexico was a pressing security need. Instead, Democratic leaders cut off Homeland Security Secretary Kirstjen Neilsen’s presentation and tried to no avail to press Trump to accept their offer.

“It just was not a credible presentation,” Senator Dick Durbin said of the briefing. He added that Senate Minority Leader Chuck Schumer and Nancy Pelosi, who is expected to be elected House speaker on Thursday, insisted the conversation focus instead on the shutdown.

Pelosi said the House would proceed with plans to hold votes on Thursday, when they formally take control of the chamber from Trump’s fellow Republicans, on legislation that would end the shutdown without providing the wall money sought by Trump.

“We’re asking the president to open up government,” Pelosi told reporters outside the White House after the meeting.

But Senate Majority Leader Mitch McConnell said afterward on the Senate floor that the chamber would not vote on the legislation, calling it a “political sideshow” and “total non-starter.”

Democrats say they want to fund most of the government through September, but allow for another month to negotiate wall funding by only partially funding the Department of Homeland Security, which is responsible for the wall.

Schumer said Trump conceded that Republicans would lose leverage if they allowed the rest of the government to be funded.

“We asked him to give us one good reason … why you should continue your shutdown of the eight Cabinet departments while we are debating our differences on homeland security. He could not give a good answer,” Schumer told reporters after the meeting.

In a tweet on Wednesday evening, Trump called the meeting “important” and said he would continue talks with Democrats “to pass a bill that secures our borders, supports the agents and officers on the ground, and keeps America Safe.”

‘AS LONG AS IT TAKES’

Trump’s demand for $5-billion in funding for a wall along the U.S.-Mexico border triggered the shutdown affecting about a quarter of the federal government and 800,000 federal workers.

Before meeting with lawmakers, Trump said the shutdown would last for “as long as it takes” as he pushes for wall money as part of any legislation to reopen agencies shuttered when their funding lapsed on Dec. 22.

“It could be a long time,” Trump told reporters on Wednesday during a Cabinet meeting, “or it could be quickly.”

“We know that we have a challenge along the border,” said Kevin McCarthy, the top House Republican. “We want to solve that issue. We want to make sure we open this government up. And I think at the end of the day, the president, listening to him, he wants to solve this as well.”

Pelosi noted that the legislation being presented in the House had previously won backing in the Senate, which will remain in Republican hands in the new 2019-2020 Congress that convenes on Thursday.

But McConnell said previously that Senate Republicans would not approve a spending measure Trump does not support.

Trump made the border wall a key part of his presidential campaign. Before meeting with the Democrats, Trump called the border a “sieve,” rebutted Pelosi’s complaint that a wall was immoral, provided an estimate of the U.S. illegal immigrant population far higher than the figures most experts cite and made disputed comments about progress toward building a wall.

The visit by Pelosi and Schumer was their first to the White House since their sharp exchange with Trump in the Oval Office on Dec. 11 during which the president told them he would be “proud to shut down the government for border security.”

He has since blamed Democrats for the shutdown.

The $5-billion Trump is seeking would cover only a portion of the money needed for a border wall, a project estimated to cost about $23-billion. Trump had said Mexico would pay for the wall, but Mexico has refused. 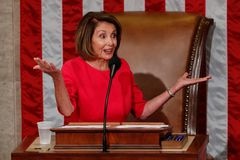 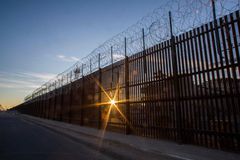 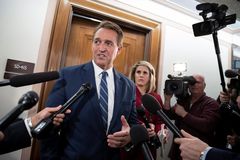