The Trump administration is backing a plan to give direct cash payments to Americans in an up-to US$1-trillion legislative package meant to shore up the U.S. economy as the country’s death toll from the coronavirus pandemic passes 100, with more than 6,000 people testing positive.

Negotiations over the measure Tuesday came as the escalating crisis caused further shutdowns across the country, including a warning that New Yorkers may soon have to “shelter in place” and only leave their homes to buy essentials.

The pandemic even wreaked havoc on the presidential election campaign. In Ohio, the Governor used public health laws to shut down all voting locations, cancelling that state’s primary. Florida, Illinois and Arizona went ahead with voting, but some polling stations opened late or not at all after clerks resigned en masse.

Joe Biden defeated Bernie Sanders in all three states, gaining a near-insurmountable lead in convention delegates. Early returns in Illinois showed turnout was half its total from four years ago.

At the White House, Treasury Secretary Steve Mnuchin said he would press for legislation that would give Americans money by the end of the month. The move has been promoted by congressional Democrats since last week.

“We’re looking at sending cheques to Americans immediately,” Mr. Mnuchin told a briefing by the coronavirus task force. “Americans need cash now and the President wants to get cash now. And I mean now, in the next two weeks.”

Mr. Mnuchin did not say how large the payments would be or who would be eligible, but said wealthy people would not receive them. He said he would also push for bailouts for the hotel and airline industries and money for small business, and allow people to defer paying tax on up to US$1-million for three months.

The move was an about-face for the administration, which previously had championed a payroll tax cut that would not have helped people who are out of work. And it signalled a new sense of urgency from a White House that had previously been criticized for its slow response to the crisis.

“We’re going big,” President Donald Trump said of the new proposed measures. “We want to get it done and have a big infusion as opposed to going through little meetings every couple of days.”

When exactly the package would move forward, and how it would work, are unclear. Mr. Mnuchin outlined his ideas to Republicans on Capitol Hill later Tuesday. One proposal by Senate Democrats would pay US$2,000 to people under an income cutoff; Republican Mitt Romney has pitched US$1,000 cheques to every American.

“I cannot predict how long we will be here, but we’ll be here as long as it takes to pass yet another measure,” he said.

To many people, the promised relief was not coming quickly enough. An online spreadsheet of Washington servers and bartenders seeking contributions to make up for lost wages and tips had more than 1,400 entries Tuesday, with about half of the workers indicating they have no health insurance.

“We’re just trying to figure out what to do in the absence of any real local or federal government leadership. They’ve just completely abdicated their responsibility to provide for us as a country or as a city,” said the list’s creator, Ana Owens, a campaigner for a reproductive rights group, whose girlfriend is a bartender.

Gray Kimbrough, an economist at American University in Washington, said it was hard to think of any precedent for so many people in so many industries all losing work simultaneously. The United States’s lack of universal health care, paid sick days and vacation time are making the crisis worse.

“We don’t have the safety nets that other countries might have, which makes it a lot harder to deal with a pandemic like this,” Prof. Kimbrough said. “It becomes even more important to get cash in those workers’ hands and get it to them quickly.”

While Democrats in three states tried to forge ahead with primaries in the midst of the shutdowns, the pandemic caused numerous logistical hurdles. At least 500 poll clerks in Florida’s Palm Beach County quit, prompting some polling locations to move or open late. Illinois scrambled to move dozens of polling places that had been planned to be set up in nursing homes, while officials in Phoenix cut the number of locations to 151 from 240.

Ohio Governor Mike DeWine fully shut down that state’s primary, with plans to bump the vote to June. Going ahead with the election, he said in a statement, “would force poll workers and voters to place themselves at an unacceptable health risk.”

Mr. Biden won particularly big in Florida, where he notched a nearly 40-point margin. Incomplete returns from Illinois showed him ahead 59 per cent to Mr. Sanders’s 36 per cent, while he led in Arizona 43 to 30.

The moderate former vice-president delivered his victory speech on a grainy livestream from his home in Delaware, where he had set up a podium flanked by two American flags. Mr. Biden tried to strike a presidential tone, highlighting his central campaign argument that he can bring a steady hand to the tiller after Mr. Trump’s chaos and divisiveness.

“Tackling this pandemic is a national emergency akin to fighting a war,” he said. “Our goal as a campaign, and my goal as a candidate for president, is to unify our party and to unity our nation.”

“Senator Sanders and I may disagree on tactics, but we share a common vision for the need to provide affordable healthcare for all Americans to reducing income inequality to taking on climate change,” he said. “I hear you. I know what is at stake. And I know what we have to do.”

Although Mr. Sanders has been rapidly losing ground to Mr. Biden in the race since last month’s South Carolina primary, he has refused to bow out, suggesting he wants to push his rival further to the left before the November election.

In his own speech earlier in the evening, Mr. Sanders did not even address the primaries. Instead, he outlined his own proposal for fighting the coronavirus-induced economic downturn. The senator said the federal government should send US$2,000 monthly to every household in the country until the pandemic is done.

“We can do it, we can address this crisis,” he said. “We can minimize the pain.” 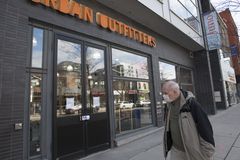