The Vermont senator hasn’t stopped campaigning – or dreaming. The political world may have assumed that former vice-president Joe Biden will be the Democratic presidential nominee but that consensus has not pierced Sandersworld.

The Sanders campaign now is the incarnation of the famous applause line that senator Edward Kennedy delivered in his 1980 presidential campaign: “The work, goes on, the cause endures, the hope still lives and the dream shall never die.”

The difference is that Mr. Kennedy delivered that incantation while conceding that he had lost the fight to incumbent president Jimmy Carter. Mr. Sanders’s work goes on, his cause endures, his hope still lives – and there is every indication that he believes his dream shall never die.

Mr. Sanders hasn’t quit, moreover, because he has no quit in his repertoire.

And he hasn’t quit because, as the songwriters Burt Bacharach and Hal David once put it in an entirely different context, breaking up is so very hard to do.

“It’s hard to quit when you imagine yourself being president, and especially hard when you have been doing something like a campaign with other dedicated people," former Democratic senator Bob Kerrey of Nebraska, who folded his own once-promising presidential campaign in 1992, said in an interview. “There are tens of thousands of people who are going to be disappointed when Bernie says ‘goodbye.’ When you leave something like this, you grieve. You can be bitter or you can move on.”

Mr. Sanders is not moving on – in part because the respiratory threat of coronavirus has breathed new life into his campaign for a Canada-style universal health-care plan.

“Right now, 87 million Americans are uninsured or underinsured,” Mr. Sanders tweeted earlier this month. “Our profit-driven health care system is a danger to our people. During this crisis, Medicare should cover all health care treatment for free, including coronavirus testing, treatment, and the eventual vaccine.”

That notion, which is keeping Mr. Sanders in the public eye, is also keeping the Vermonter in the race. But even more than Richard Nixon, who said in his 1974 White House resignation speech that “I have never been a quitter," Mr. Sanders has lived that way.

He lost his first four statewide races – two for governor and two for U.S. senator as a fringe Liberty Union candidate. The highest vote he received in those contests was 6 per cent, in 1974.

A dozen years later, after winning the Burlington, Vt., mayoral race by a handful of votes, he ran an independent race for governor against the Democratic incumbent, Madeleine Kunin, and Republican lieutenant-governor Peter Smith. He placed third, 33 percentage points behind Ms. Kunin, but because no candidate won a majority, the contest was thrown into the Vermont General Assembly. Mr. Sanders held out hope he would prevail even though he hardly knew anyone in the legislature. When the 180 state lawmakers cast their ballots, Mr. Sanders captured a total of two votes.

“Bernie is one of the least gracious people on Earth,” said Garrison Nelson, an emeritus University of Vermont political scientist who has known Mr. Sanders for a half century. “He doesn’t have that gene. He spent most of his early career being called a wild-haired goofball no one took seriously.

“Now that people are taking him seriously,” Mr. Nelson continued, “he does not want to let go.”

Indeed, Mr. Sanders did not let go four years ago, when former secretary of state Hillary Clinton clearly was going to be the Democratic nominee. Many Democrats believe Mr. Sanders’s persistence injured the party’s prospects against Donald Trump.

“This is a guy who in the first four races he ran got only a few percents of the votes until he finally was elected mayor of Burlington by 10 votes,” said Thomas Devine, a top adviser to the senator’s 2016 campaign. “He’s not accustomed to backing away. He once told me: ‘Being a socialist in the United States Senate is tough.’ So he is not just fighting for the nomination of a political party but he’s trying to lead a movement of people animated by issues. He wants to move the country on health and education and wages. For him it is core political values.”

It was core political values that also kept the Rev. Jesse Jackson in the Democratic race when it was clear that Michael Dukakis would be the 1988 nominee. Mr. Sanders was a top adviser to Mr. Jackson, who held onto the hope that the Massachusetts governor would select him as his running mate. Democratic regulars fear that Mr. Sanders also might stay in the race for several more months.

“The coronavirus has prevented us all getting behind one nominee,” Mr. Kerrey, the 1988 presidential hopeful, said, reflecting the postponement of 14 states’ primaries. “The longer this plays out, the weaker the Democratic chances are, especially since Trump is a master in reality television.”

Analysis
Joe Biden takes his campaign to the digital front porch as coronavirus throws up new obstacles for Democrats
March 25, 2020 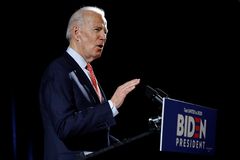 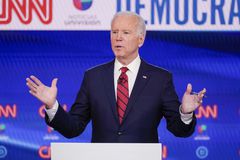 Analysis
In Sunday’s Democratic debate, Biden and Sanders agreed on one thing: Trump’s mishandling of the coronavirus crisis
March 16, 2020 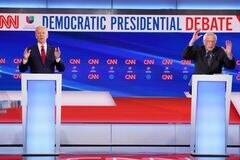