Growing up in rural Ontario in the 1980s, Hawksley Workman had a special relationship to The Neverending Story.

“It was the only VHS my school owned,” recalls the 44-year-old songsmith, referring to the home video system released in the mid-1970s.

“Every indoor recess, [and] even once during a solar eclipse, they would shove us in the gym and we’d watch The Neverending Story. It became a rhythmic school mantra of watching this movie at least twice a year.”

So, when approached by award-winning director Jillian Keiley about whether he wanted to score a theatrical adaptation to be staged as part of this year’s Stratford Festival, Workman could barely contain his excitement. “It was like, ‘Hell yeah, I do!’” he says, laughing. 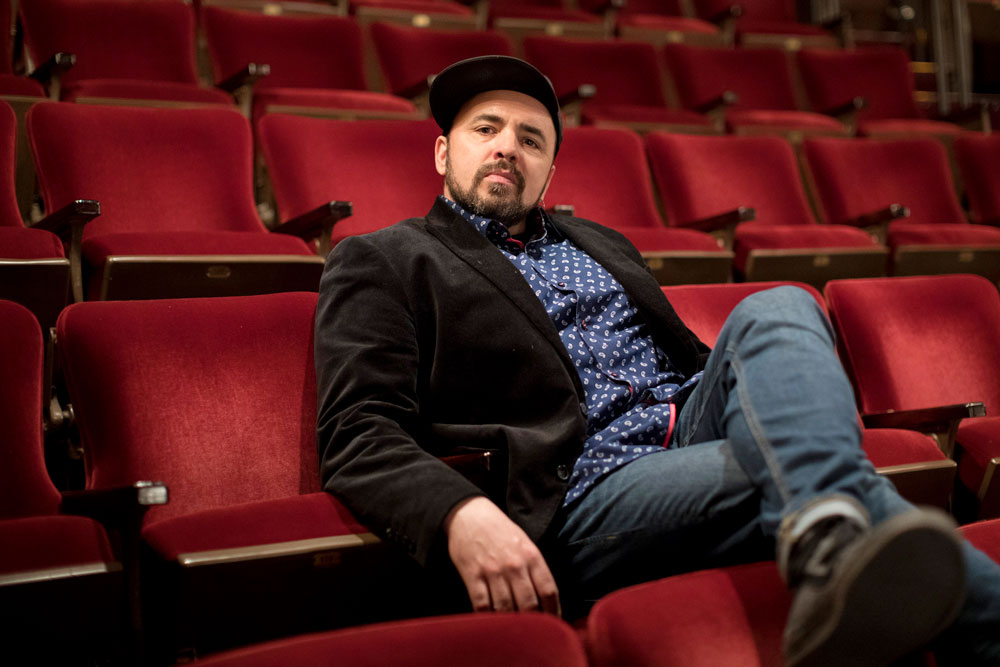 Workman hauled vintage synthesizers from his home in Montreal to Stratford where he produced a dreamy synth-pop score and a vibrant title song, “May Your Story Never End” CHRIS YOUNG

Not long after, Workman found himself hauling vintage synthesizers from his Montreal studio to a rental house in the dreamy theatre town of Stratford.

Working alongside Keiley and the cast as they workshopped the play, he emerged three months later with a synth-heavy, neon-textured soundtrack.

Far from a pastiche of Klaus Doldinger and Giorgio Moroder’s musical contributions to the 1984 film, it brings to mind the sonic landscape of the decade as a whole.

Keen listeners will hear tributes to Thomas Dolby, Peter Cetera and the techno wizardry of video-game chiptune master Koji Kondo.“[When I was] growing up, my system was marinated in this music so heavily,” Workman says.“

“I’m basically just letting that kid out now that I’m an adult who knows how to run the software.”

Adapted from Michael Ende’s 1979 fantasy novel with nods to the film of the same title, The Neverending Story tells the tale of bookish 10-year-old Bastian (played by a pitch-perfect Jake Runeckles) being bullied and forced to hide in his school’s attic with only a fantastical novel to keep him company. 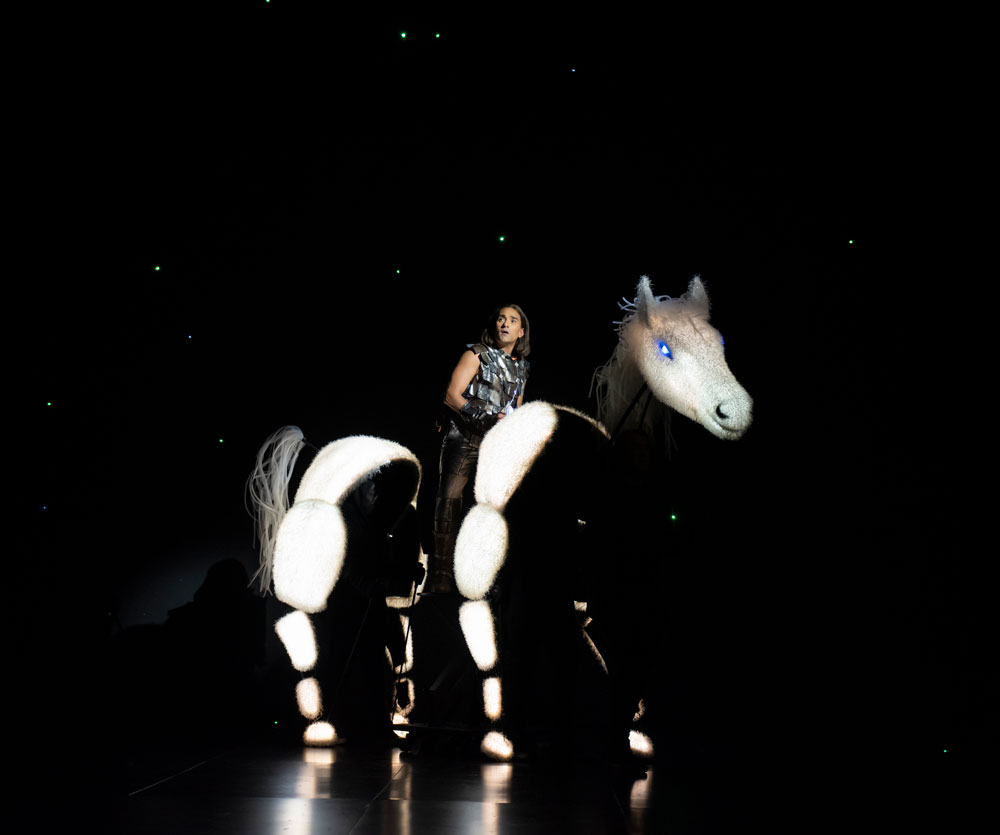 As he begins to read, he finds himself enraptured in the book’s epic tale of the young warrior Atreyu (Qasim Khan) and his quest to save his magical world from destruction by a nebulous entity known only as The Nothing.

Working with a script by David S. Craig, Keiley and designer Bretta Gerecke have brought The Neverending Story to the stage with vivid imagination and whimsy, making use of the source material’s rich characters and existential undertones to create a playful glow-in-the-dark metafictional wonderland.

Accompanied by Workman’s score, it will instantly spark pangs of warm nostalgia from those old enough to remember the film or the book, as well as wonder and amazement for a new generation who understand those touchstones through the prism of the ’80s cultural renaissance, courtesy of Star Wars, Stranger Things and synth-pop revivalists like Taylor Swift and Miley Cyrus.

“I have young nephews that are obsessed with Star Wars, dinosaurs and UFOs. They’re going through those same obsessions 30-plus years after I did,” Workman enthuses. “When I was writing this music, they were my target audience.”

A national musical icon since his debut in 1999, Workman says he can see both sides of that parallel. By delightful coincidence, his 16th and latest album, Median Age Wasteland, mines his own period nostalgia for much of its rich lyrical content.

“The album is about the early 1980s, when I was the target audience for everything, including The Neverending Story,” he explains. “The innocence was so painfully beautiful. Our childhood was bolstered by the ability to watch movies in your house with a VCR.

It was hot and electric with fantasy. It’s like our imaginations were starving for this idea [that] we were going to do something exceptional.” In that spirit, when he agreed to take on the project, Workman informed Keiley that not only would he be scoring the production, he’d also be writing a title song so catchy it will, he notes, “obliterate the one from the 1980s” sung by one-hit wonder Limahl.

“I wanted to replicate that idea of the theme song that we all glued ourselves to as we roundhouse-kicked our way out of the theatre,” he points out.

The result: “May Your Story Never End” is a vibrant slice of synth pop which bookends the play. Like the production, it feels vital and nostalgic in equal doses while magically maintaining its beautifully painful innocence. 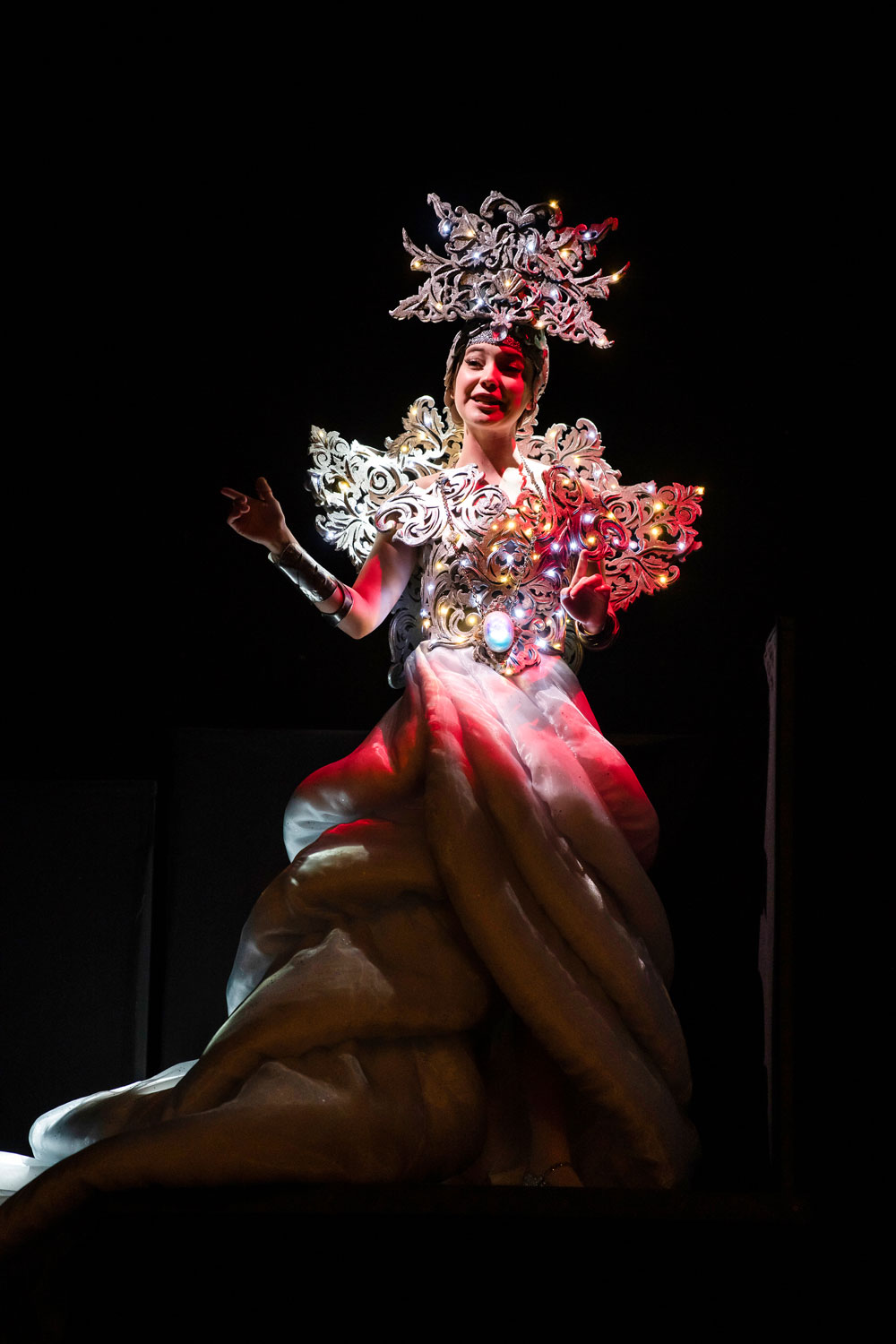 A standout gown worn by Mamie Zwettler as The Childlike Empress, contributes to the sum of many parts that capture the script’s ode to the power of imagination EMILY COOPER 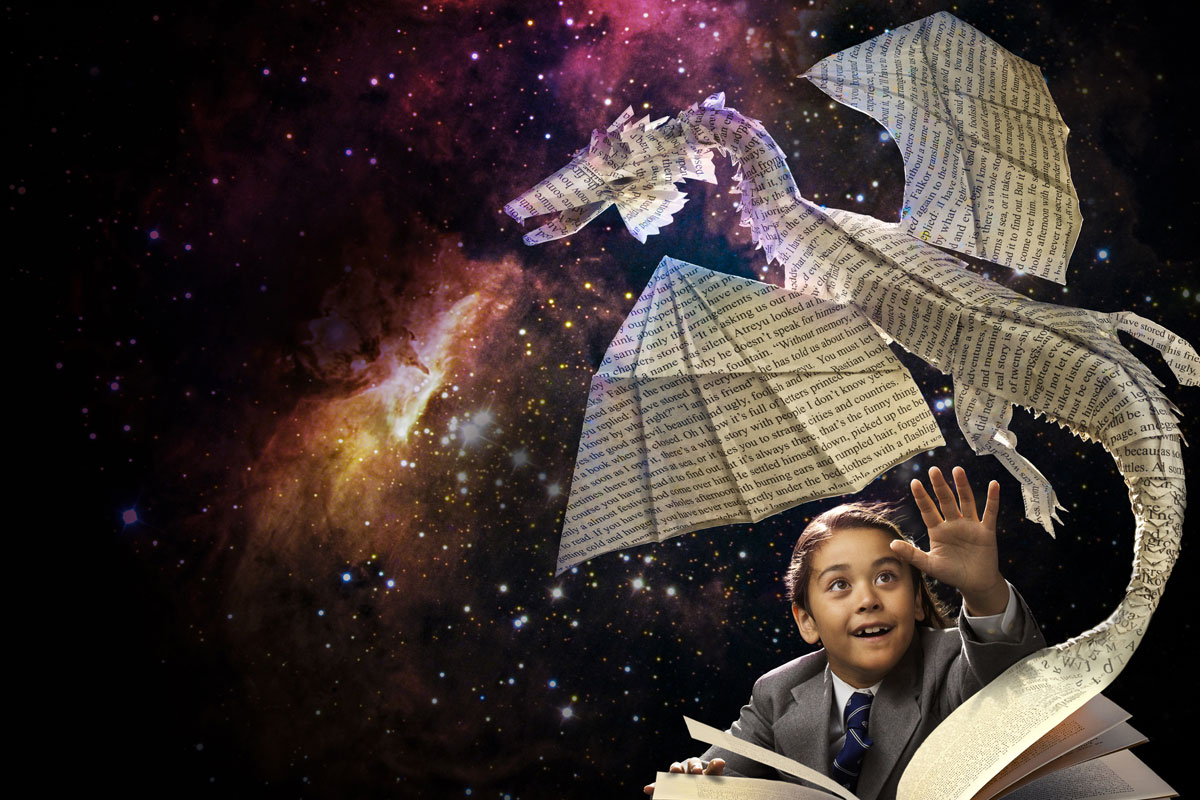 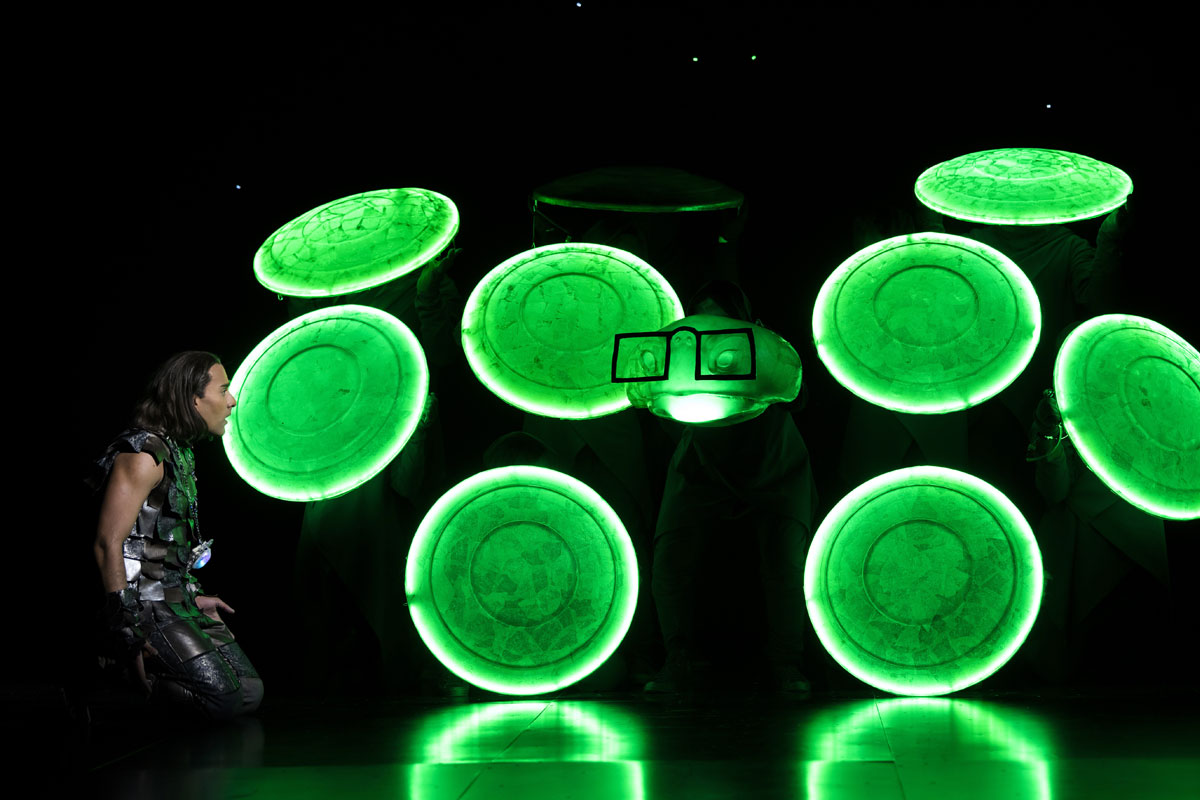 Qasim Khan (left) as Atreyu and Kim Horsman as Morla the Turtle in The Neverending Story. Photography by Emily Cooper. 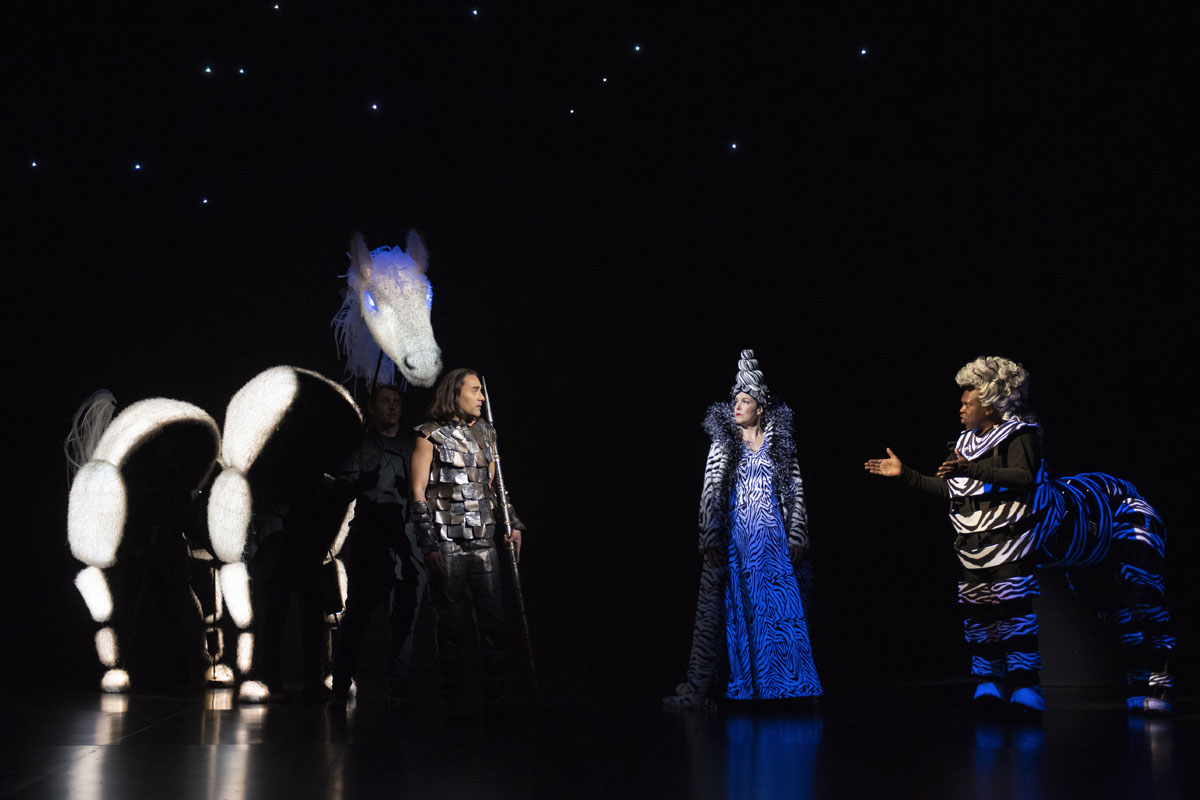 From left: Andrew Robinson as Artax the Horse, Qasim Khan as Atreyu, Laura Condlln as Chancellor of the Ivory Tower and Roy Lewis as Cairon in The Neverending Story. Photography by Emily Cooper. 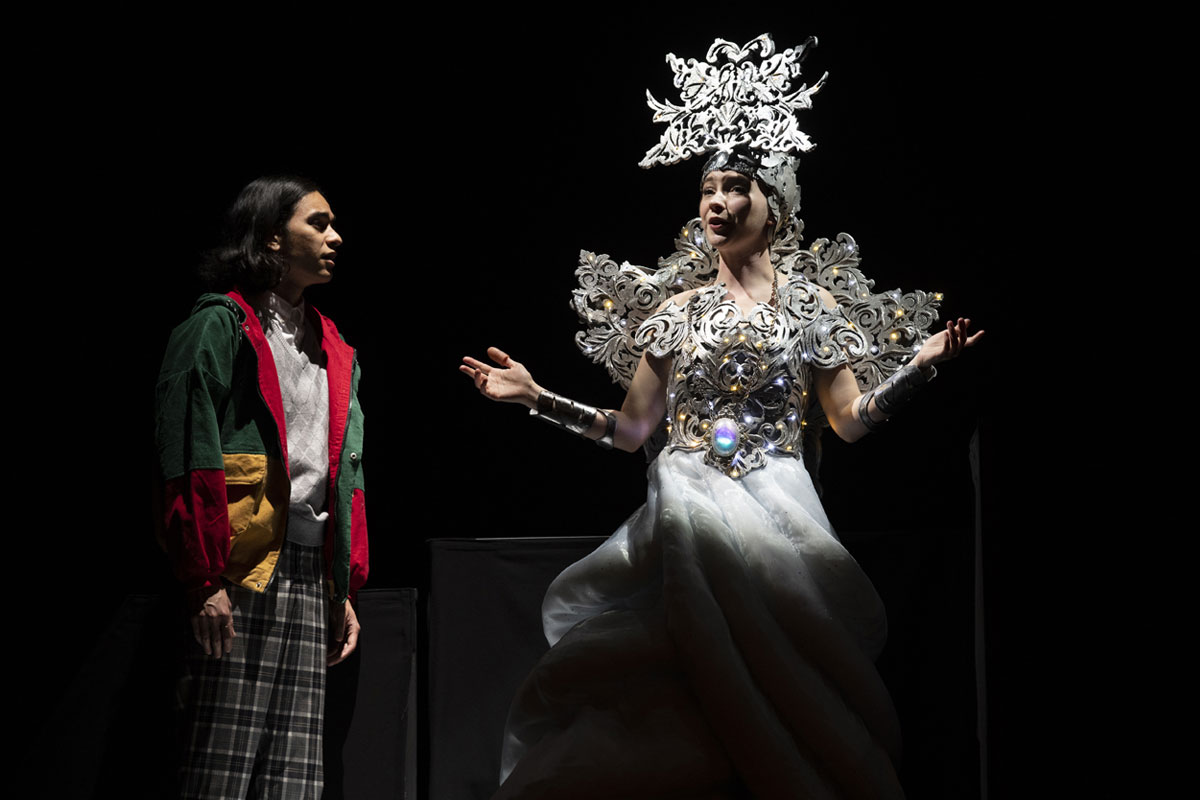 Jake Runeckles as Bastian and Mamie Zwettler as The Childlike Empress in The Neverending Story. Photography by Emily Cooper. 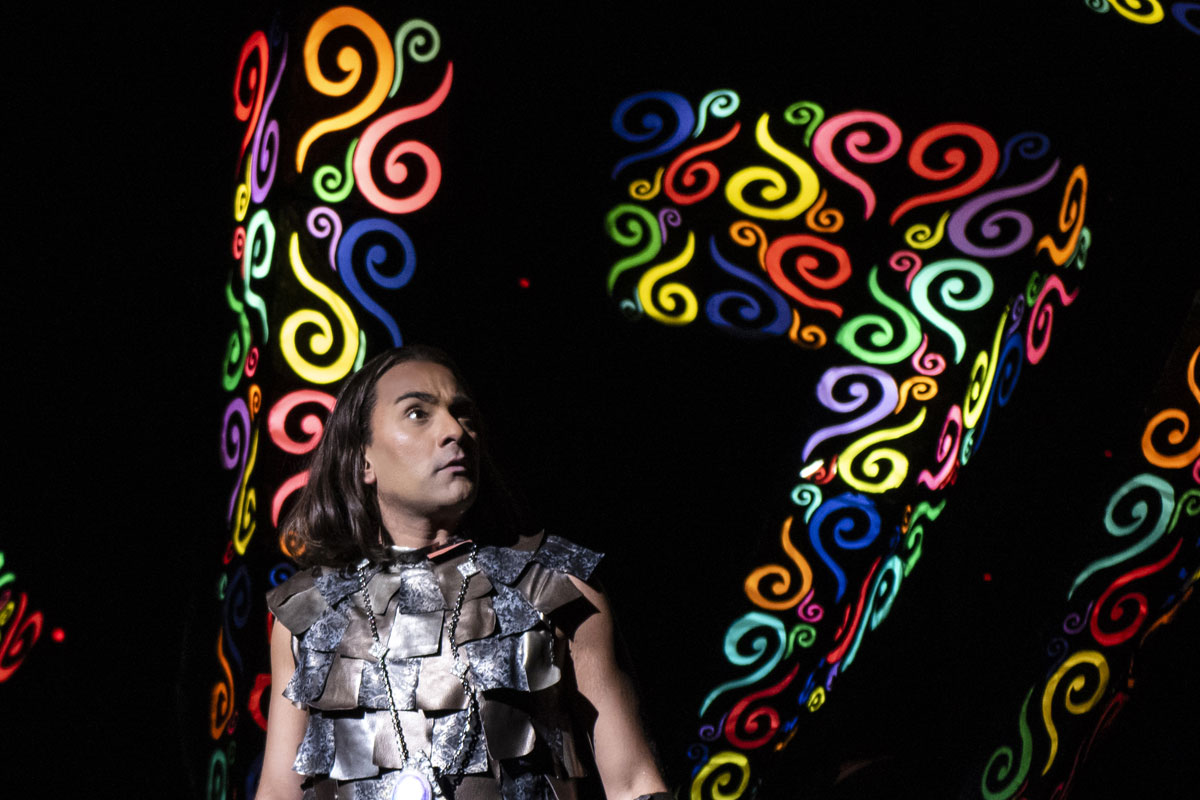 Qasim Khan as Atreyu in The Neverending Story. Photography by Emily Cooper. 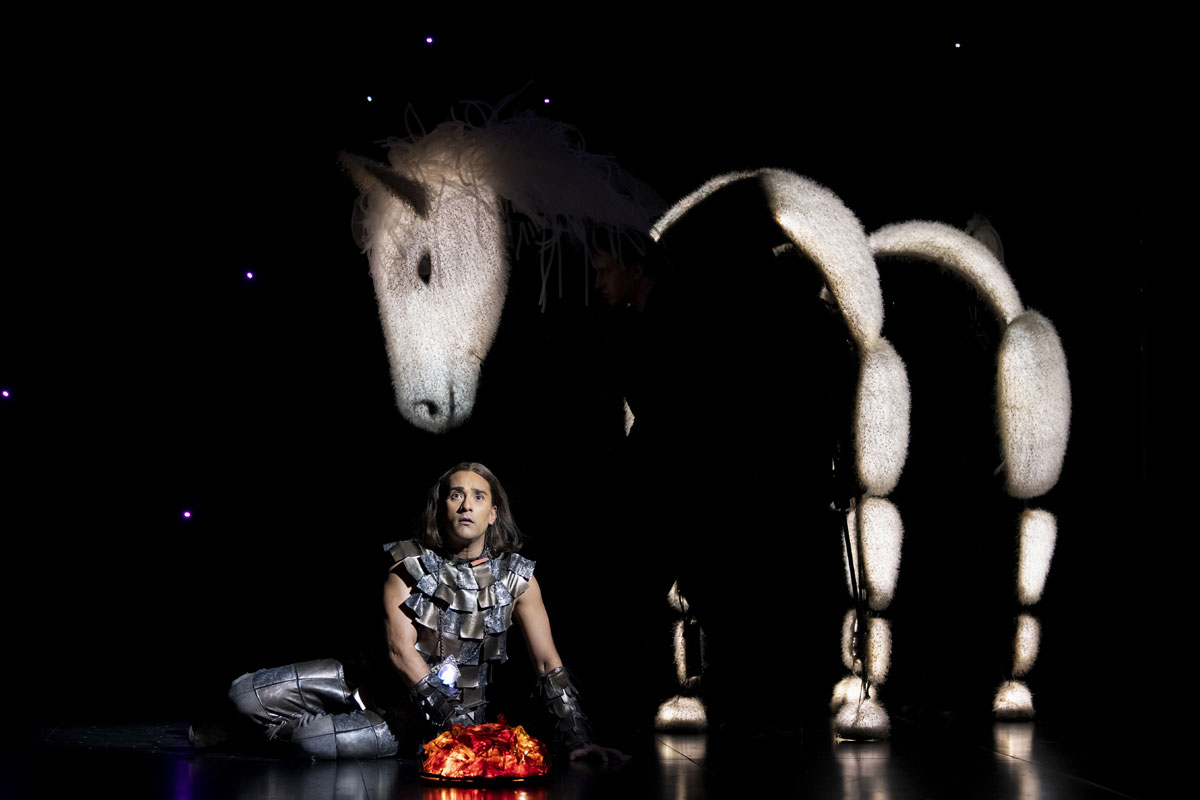 Qasim Khan (centre) as Atreyu and Andrew Robinson as Artax the Horse in The Neverending Story. Photography by Emily Cooper. 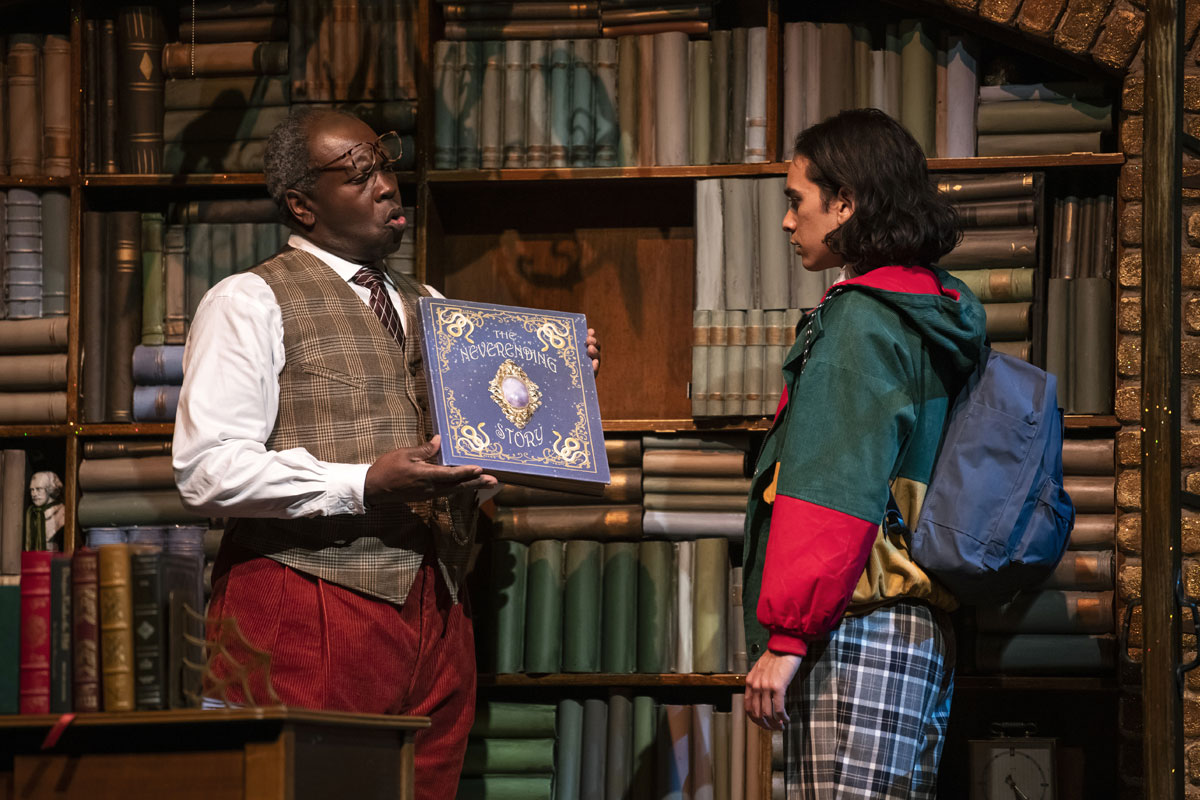 Roy Lewis (left) as Bookseller and Jake Runeckles as Bastian in The Neverending Story. Photography by Emily Cooper. 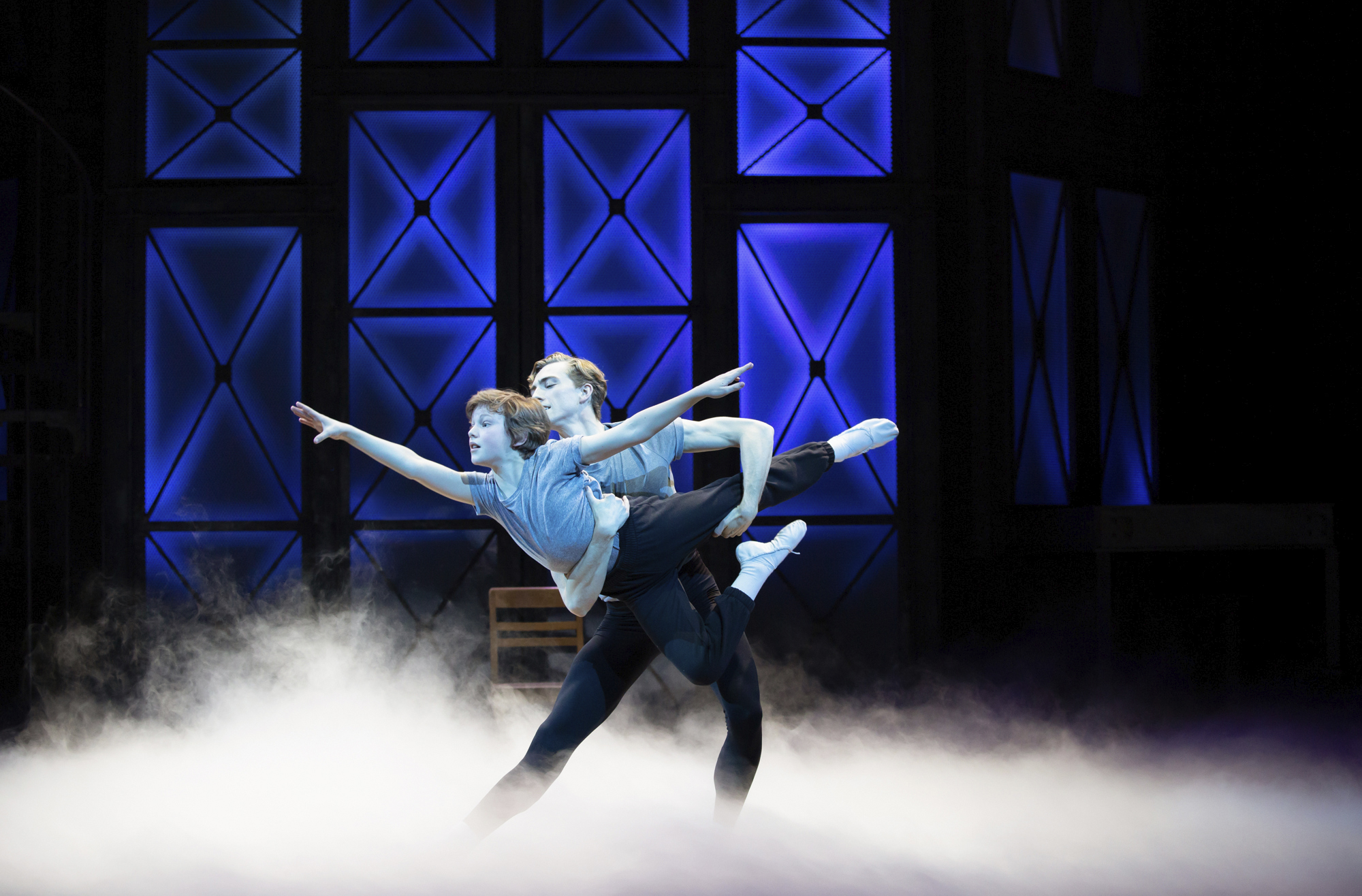 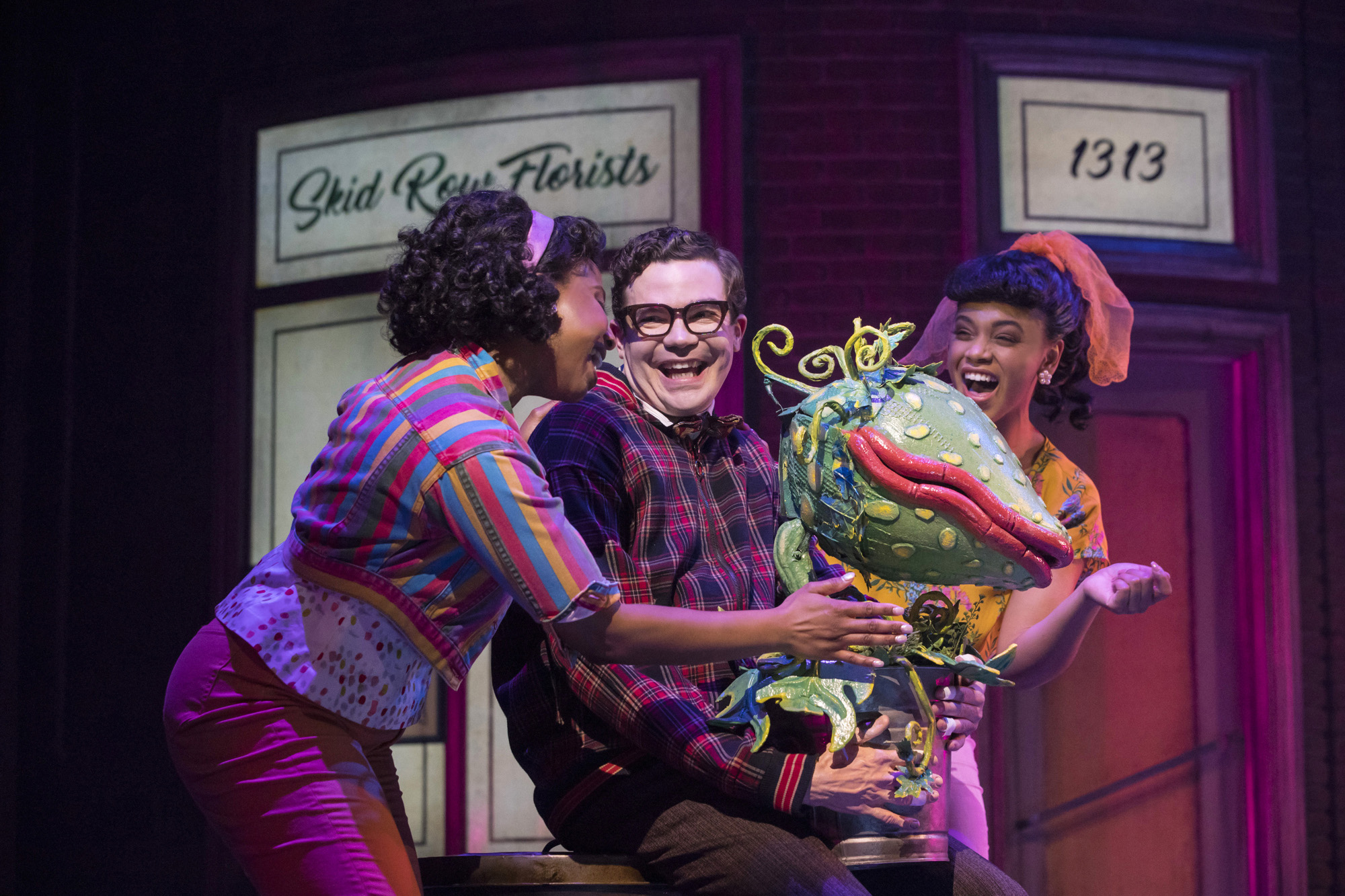